Opening next month, expect the same intimate dinner-party feel of the 10-person degustations the chef once hosted in her Box Hill home. But the menu – with 20 different regional Indian dishes – will be completely new. Photography: Courtesy of Enter Via Laundry
1/8 After amassing a waitlist in the thousands – it burgeoned after she appeared as a guest judge on Masterchef in 2020 – chef Helly Raichura is giving her pop-up dining concept Enter Via Laundry a permanent, dedicated home in Carlton North.

Set to open in late March, the new restaurant will be as intimate as the 10-person degustations she once hosted at her Box Hill home, before launching a series of roving out-of-town pop-ups.

“We are going to retain the dinner-party side of things,” Raichura tells Broadsheet. “There’s going to be a living room where people can have a nibble or a drink and wait to sit on the shared table.”

But the execution will diverge from what diners have seen in the past.

“I feel I’m going to go back to the style that Indian cuisine really demands,” says Raichura, who also co-hosts SBS series India Unplated, exploring the cuisine’s complexities. “There will be individual courses, but the main is a big spread that goes on for a good hour.”

The set menu will cost around $250 a head for 20 different items, about eight of which will be included in the main course. And like the previous pop-ups, native and seasonal ingredients will be a key factor in what ends up on the table.

The space will reflect the menu, juxtaposing artwork and servingware sourced from both India and Australia, while the feature piece of the main dining room will be a striking painting by Pintupi artist Debra McDonald Nangala. Raichura has also brought in ceramics from Melbourne creative Andrei Davidoff, carved marble boxes from Agra, India, and handmade metal plates from Gujarat, where she grew up. Raichura says, “They’re made out of kansa, which is a particular type of metal that [is said to have] medicinal qualities”.

Enter Via Laundry is slated to open in late March. 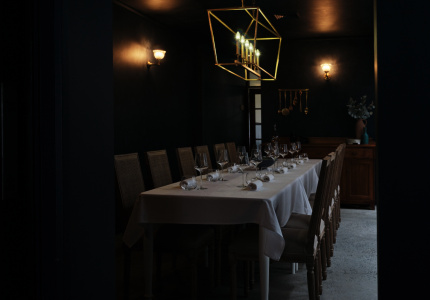