George Calombaris’s long-awaited Hellenic Hotel has opened in Williamstown. But although it’s the third Hellenic restaurant for Calombaris and co-owner Travis McAuley (with Hellenic Republics in East Brunswick and Kew), this one is tailored to the west.

“It’s not just about opening a restaurant anymore,” says Calombaris. “We’ve put a lot of work into understanding this place, its past, the community and its values.”

Hellenic Hotel is split over two levels in what was once Hobson’s Bay Hotel. Downstairs, decked out in blue and white, is a 120-seat restaurant. Upstairs is the public bar, complete with a large heated terrace with city views.

Josh Pelham, former head chef at Northcote’s Estelle Bistro and ESP, has taken up the position at Hellenic Hotel. The menu is similar to that at Hellenic Republic (souvlakis, saganaki and rice pudding), although there are a few changes.

“Part of understanding this place is understanding that in the 1920s, the main dish on the [Hobson’s Bay Hotel] menu was lamb’s brains,” Calombaris says. “So we’ve brought them back, but with our Hellenic twist. We’ve also brought back the pavlova; we’ve put a roast chicken on the menu.

“Having Josh at the helm is great,” he adds. “He worked for me many years ago at Fenix and again at The Press Club. He’s a better cook than I am now, no doubt about it. There’s not one dish on the menu that doesn’t have his mark on it.”

For drinks, there’s a range of Greek wines, beers on tap and by the bottle, and pre-batched cocktails such as the Kosmo – Hellenic Hotel’s take on a Cosmopolitan.

“It’s exciting to be on the west side,” Calombaris says. “There’s a massive population out here who love good food, who know good food. Now they’ve got something close by where they can go and enjoy themselves.” 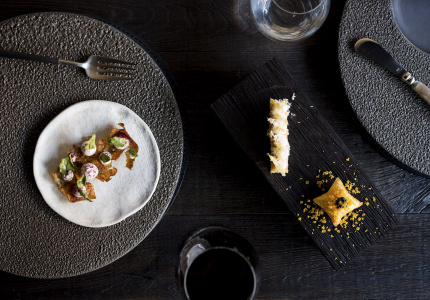