It’s named after owner Chee Wong’s mother-in-law, who made it herself at a Penang hawker stall in the ’90s. And the exact same secret special sauce is used at this bustling Hardware Lane spot. 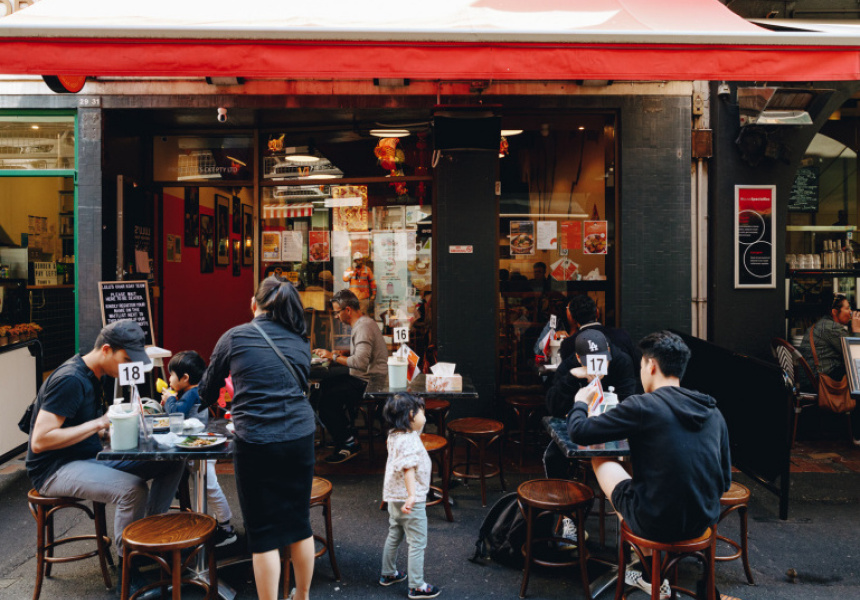 The orange walls of Lulu’s Char Koay Teow on Hardware Lane are lined with portraits of a woman cooking its signature dish in a smoking hot wok. They show more than just the process, though – they’re an homage to the former hawker, Lulu Ong, who’s front and centre.

“Lulu is the name of my mother-in-law, she’s from Penang,” owner Chee Wong tells Broadsheet. “She used to be a street-food hawker back in the ’90s and was very popular for her char kway teow.”

The stir-fried dish is a staple in hawker centres around Malaysia, thanks to the bouncy, flat rice noodles; the charred, smoky flavour that comes from the wok’s high heat; the soy-based sauce that binds it all together; and contrasting textures from all the other ingredients.

Different regions around the country have their own traditional recipes, but Penang-style reigns supreme at Lulu’s: Wong explains that the secret special sauce is lighter in colour and much more savoury (other regions add a hint of sweetness, he adds).

Each plate includes noodles made exclusively for Lulu’s, alongside Chinese sausage, egg, bean sprouts, chives and chilli – all tossed and cooked together in pork lard. The vegetarian version omits the sausage and uses regular oil.

“This recipe is similar to how we get char kway teow in Penang – the flavour, the texture, the noodles. I would say it’s 95 per cent similar,” Wong says. “The five per cent is we couldn’t get proper bean shoots here – in Malaysia we get them really short but here [they’re] a bit long. But that’s the only difference.”

Wong’s sauce is exactly the same as the one his mother-in-law used at her stall. She visited Melbourne in 2017 and brought her special mix over – that’s when Wong came up with the idea of specialising in the dish and serving different variations.

He started cooking it at home and selling packs online; eventually he opened a stall at Hwkr food hall, staying on for three months before it closed in 2019.

Wong signed the lease for the Hardware Lane spot just two days before Melbourne’s first lockdown. But he powered through with help from takeaway and word of mouth. Now there are lines out the door almost every night.

The menu has expanded, too. There are now a number of different kinds of char mee, stir-fried Hokkien egg noodles; Penang white curry mee, a warming, coconutty curry noodle soup; and snacks such as an ultra-flaky curry puff.

To drink, there’s teh tarik, a Malaysian drink of strongly brewed tea and condensed milk, as well as coffee and hot Chinese tea. As well as Ong’s portraits, vintage posters, postcards and ornaments line the walls, alongside an old fan, clocks and decorations, and Chinese lanterns hang from the ceiling.

“Our concept here is like a coffee shop,” Wong says. “In Penang you get lots of coffee-shop-style restaurants with no bookings. Just walk in, sit at the table – easy.”