Beer, lollies, T-shirts and even bottles of Dom Perignon – it’s surprising what you can find inside machines at some of Melbourne’s restaurants nowadays. We know vending machines call to mind bland cafeterias and grimy train stations. But as the Japanese (who else?) proved a long time ago, they can also be kind of fun. Especially when you put them in a decent restaurant.

Chef-restaurateur Andrew McConnell put a machine inside his CBD diner Supernormal back in 2014. After you’ve sampled the kitchen’s New England lobster rolls, slow-cooked Szechuan lamb and other Korean/Japanese/Chinese hits, head on over for Peko milk lollies and a pack of Pocky, those delightful little chocolate-coated biscuit sticks.

A newer Japanese restaurant, Collingwood’s Chotto Motto, installed a beer vending machine earlier this year. Its location – right by the bar, where people queue up – isn’t great, but we have no complaints about what’s inside. Apart from the nice local beers, there are stubbies from Japanese craft brewery Hitachino Nest, Pocari Sweat (a Japanese sports drink), canned sake and a rather odd coffee-and-vanilla dessert jelly in a bottle.

In South Yarra, the eatery once known as Ramblr just re-opened as Leo’s by the Slice. The NYC-style pizzeria has a glass-fronted box dispensing tinnies and Leo’s by the Slice T-shirts. Step up for frosty cans of Melbourne Bitter, Sierra Nevada, Budweiser and that redneck/hipster favourite, Pabst Blue Ribbon.

From hillbilly to high roller, there’s Vue de Monde’s extravagant Dom Pérignon dispenser. The Illuminator, to use its official name, was built by a Sydney-based engineer at the behest of Vue de Monde’s Shannon Bennett. Any diner is entitled to buy a brass token shaped like the Dom Pérignon logo. Pop it in the obsidian-and-glass machine and watch as the Illuminator fades to black for several seconds, before lighting up again with a bottle of champagne inside. The bottles sell for retail price.

At the other end of the CBD, there’s Con Christopoulos’s excellent and largely unsung Butchers Diner. It’s open 24/7 selling steak sangas, burgers, Greek salads and more. But if you just can’t stand the human interaction, hit up the vegan vending machine in the little alcove out front. Also open 24/7, it’s regularly stocked with salads and sandwiches from sister business Spring Street Grocer, plus chocolate, coconut water, juices and kombucha.

And in Clifton Hill, there’s a human vending machine courtesy of eccentric bar owner and artist Matt Bax. Next time you’re catching an exhibition at his bar-gallery hybrid, Grau Projekt, check out the monolithic red box marked “Trink Automat” (“drink machine” in German). Drop a token in, press one of five unlabelled buttons and a few minutes later, a white-gloved hand will emerge with a random cocktail. Yep. 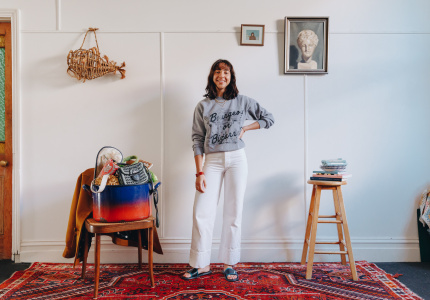