Looking to avoid the lines at the original, which set the gold standard for Hakata-style tonkotsu ramen in Melbourne? Head to Carlton. 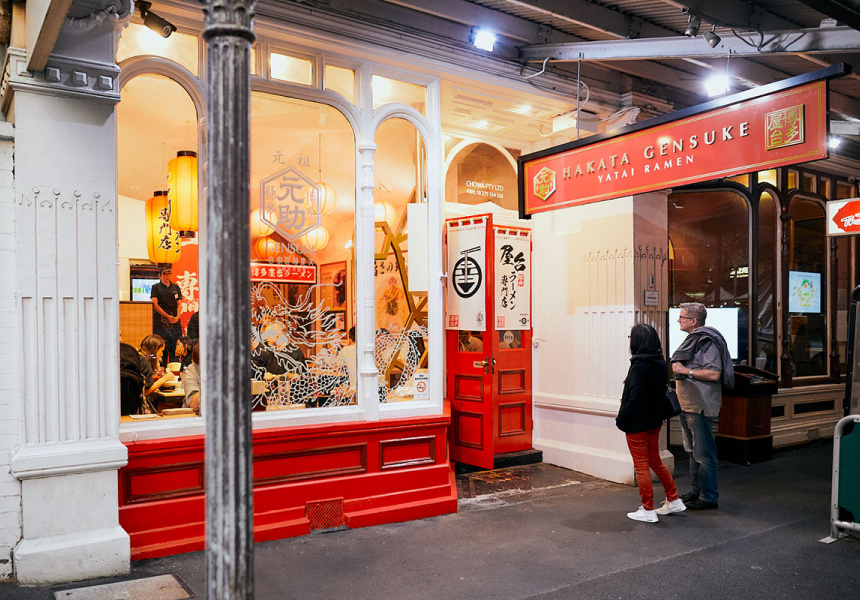 Fifteen minutes before opening, the staff at Hakata Gensuke Carlton gathers in front of a communal table for a briefing. They talk through the day before, the difficulties they faced, and how they can improve today. They end the meeting with a group chant.

“Our mission is to bring happiness to the world with Hakata ramen!” “Irrashaimase!” “Ramen ikimasu!” “Domo arigatougozaimasu!”

In late March Shoya Group, the team behind Melbourne’s string of Hakata Gensuke ramen shops in Hawthorn, Russell Street, QV and Doncaster, quietly launched its fifth Melbourne branch in Carlton. It’s at the city end of Lygon Street, less than 15-minutes’ walk from the original city spot – a good option for those looking to avoid the lines at a joint that set the gold standard for Hakata-style tonkotsu (pork-bone broth) ramen in Melbourne. And while there’ll no doubt soon be lines just as long outside this red, white and timber shopfront, managing director Satoshi Yamanaka says this outpost is a little different.

“While it’s easy to just copy and paste, we try to provide something different for our core customers,” he says. “We have our staple Hakata tonkotsu on Russell Street and tori paitan (chicken broth) in QV, so this time we’re introducing yatai-style ramen.”

In Japan a yatai is a mobile food stand serving quick and easy meals to pedestrians and passers-by from early evening to late night. In the past the flavour of yatai ramen was sometimes led by MSG, a shortcut stallholders used to make food for drunk salarymen stumbling out of the izakayas looking for something greasy and salty to fill their stomachs with before catching the last train home.

I ask Yamanaka if he’s taking a similar approach here. “It’d probably be easier if we simply use MSG,” he says, laughing. “What we’ve done here is to tweak the original flavour to hit a lighter flavour without losing the body.”

A typical bowl of tonkotsu ramen at Hakata Gensuke starts with a creamy, gelatinous broth simmered for more than 24 hours. The lighter version here is coupled with thin, chewy homemade noodles topped with slow-cooked chashu (pork slices), menma (bamboo shoots) and negi (spring onions). Customise with extra toppings such as a soy-marinated egg, nori, black fungus or extra chashu, then add condiments such as pickled ginger, ground sesame seeds and spicy pickles (they come with a warning sticker). If you have soup left over after eating, order kaedama, an extra serve of noodles.

There’s also Black Yatai Ramen on the menu, made from infused garlic oil and black sesame paste, and a fiery red God Fire version. The dark horse is the lightest one, the clear broth Shoyu ramen, a mixture of tonkotsu and shoyu (soy sauce) only available in this Carlton shop.

“We want customers to have a choice of tonkotsu ramen that can be easy on the stomach,” says Yamanaka.

This is the only Hakata Gensuke in Melbourne to serve chashu made from pork belly on its ramen, which Yamanaka says is the proper Hakata way. It reappears in a dish of Ontama Cha-Mayo Rice, this time diced and mixed with mayonnaise, topped with a Japanese slow-cooked egg. Another option for unfinished soup is to pour your ramen broth over the rice, creating a supercharged Japanese zosui (congee).

This article first appeared on Broadsheet on June 17, 2019. Menu items may have changed since publication.