Hail Down the Roving Caviar and Vodka Trolley at Entrecote’s New Greville Street Home, a More Grown-Up Version of the Original

After seven years in South Yarra, the brasserie has found a new home in Prahran. Alongside the restaurant’s signature dishes, there’s now the aforementioned trolley, a raw seafood bar, a late-night supper menu and cocktails from the brain behind Romeo Lane. 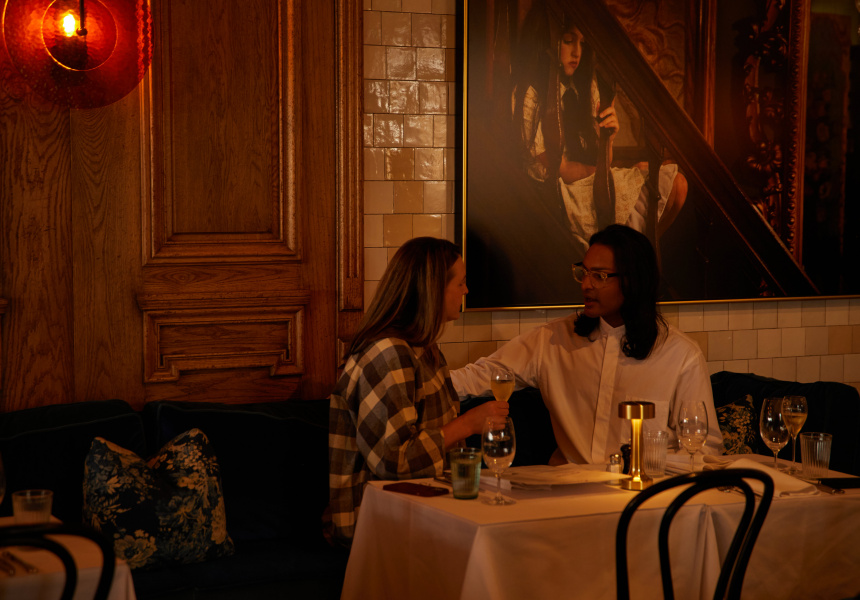 Since opening on Domain Road in South Yarra seven years ago, French restaurant Entrecote has become a beloved destination for semi-formal dinners, post-Tan drinks and Parisian-style picnic packs. Funnily enough, it was never meant to be permanent – Entrecote started as a pop-up. Now, after a solid run in South Yarra, it’s moved to Greville Street, Prahran.

“My friends own the building and they’re turning it back into a house,” says owner Jason Jones. “We were only meant to have a one-year lease.”

In its new and far more spacious location, Entrecote has taken its full form. There’s room for more than 200 people between its brasserie, dining rooms and courtyard (which draws inspiration from Paris institutions like Hôtel Costes and Ralph’s). Designed in collaboration with Jones’s partner Brahman Perera, the venue is awash with green-and-white-striped awnings, wicker seats, lantern lights and tile floors.

“We’re sort of going for that 1930s jazz-age opulence,” Jones says. “It’s a much more grown-up version of the old Entrecote.”

While the restaurant’s standard fare – including its signature Cape Grim steak frites with herb sauce – is on offer in Prahran, there are a few new additions. Look out for lobster frites; a raw seafood bar; and a roving trolley dispensing ice-cold vodka and bumps of caviar spooned directly onto the back of your hand. Plus, there’s a new late-night supper menu, available until 11pm on weekdays and 1am on Fridays and Saturdays.

“It’s things like gourmet beef bourguignon pies and croque monsieur,” Jones says. “Everything you want to soak up the grog at midnight.”

If you want to keep the party going, there’s plenty for that, too. Joe Jones of Romeo Lane has been recruited to look after the drinks menu, which features a whole new range of French-inspired cocktails.

To add to the ambience, there’s live jazz Thursday through Saturday nights, and a DJ spinning French vinyl on Fridays and Saturdays until late.