Pick up a jar from Prahran Market and taste his lifetime of experience, which began on an island in the Aegean Sea and has continued in Melbourne since the ’60s. 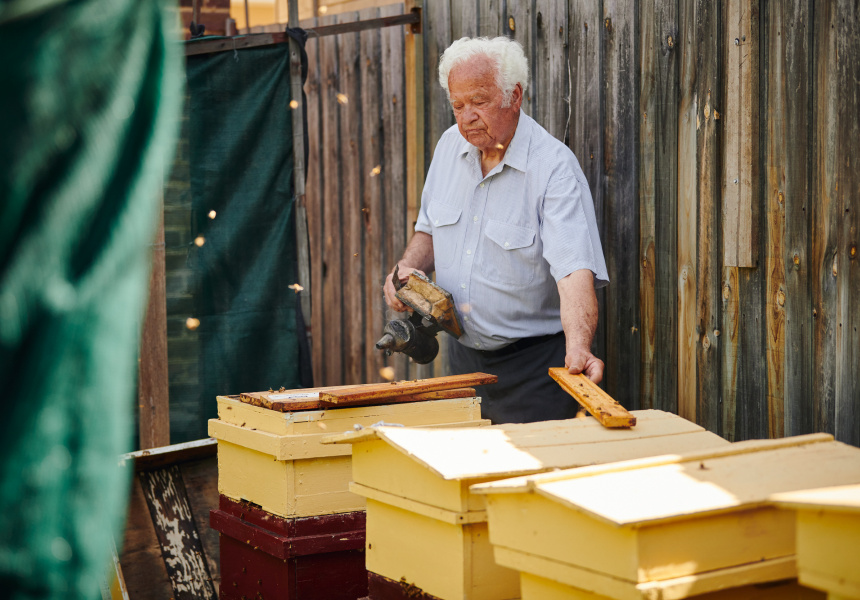 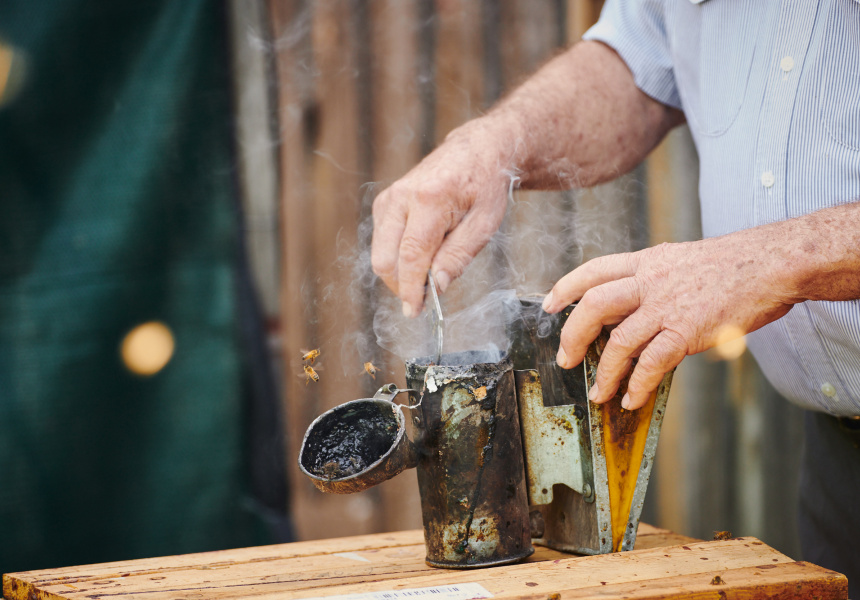 Kyriakos Malathounis – or Kerry Mala, as he calls himself for the benefit of non-Greek speakers in Melbourne – has been working with bees since he was five years old. Now 87, he maintains hives in his backyard in Windsor, gets through a litre of honey with his wife, Ekaterini, every week in coffees, teas and desserts, and is stung five to 10 times a day. A fit man, he tends daily to his extensive vegetable garden; olive and citrus trees; and – of course – his bees. His family think the bee stings and honey are the reason he doesn’t suffer from arthritis and enjoys such good health.

Malathounis, who sells his honey under the name Mr Mala, grew up on the island of Imbros, when it still belonged to Greece and had an entirely Greek population. In 1970 it was officially renamed Gokceada and became part of Turkey, eventually leading to a mass exodus of the original residents.

Malathounis is one of seven siblings. His father died at a young age and the children had to help their mother on the farm. When Malathounis started helping his mother with the bees, she had hives hanging from trees around their property. By the age of 12, he thought there was a better way of housing the bees and set about constructing pine boxes that sat on the ground, had a lid and a series of frames that hung like folders in a filing cabinet. These were strung with wire and wax, as he already understood the need to provide a base for the bees to build their own honeycomb.

Despite his youthful inventiveness, the first beehive was almost a disaster. While he was moving bees from one of the older hives to a new hive, Malathounis accidentally killed the queen. But keeping a vigil, he noticed one day that an area of bigger, longer bees had been born: new queens.

More than one queen per hive produces infighting, so he quickly built more hives and transferred each queen and a few worker bees into new homes at various locations around the island, using a mule to transport them up to 12 hours away. As he grew older and the years passed, he continued to separate queens and create new hives. At his most prolific, he was working with 350 hives, producing 15 tonnes of honey a year and trading his product across Europe.

Over the course of 82 years working with bees, Malathounis has gathered enough knowledge to fill several books. But he doesn’t write anything down. Having left school at the end of grade two, he’s attained his education and expertise by observing, doing and remembering.

“I’m like a doctor who keeps notes on his patients and who knows all about them,” he says. “I watch my bees and know what they need and when it’s time to build a new hive. Every hive has its own personality.”

In the 1960s, the Turkish government – by then in charge of the administration of Imbros – increasingly took measures to marginalise the Greek population, leading to the aforementioned exodus. Malathounis was in his thirties and decided to move to Australia. When he first arrived, he felt as though no one was interested in honey except other Greek immigrants. Unable to make money from selling his honey, he first worked on the production line at General Motors Holden. Then, having trained as a chef in the Greek army, he cooked at Kaliva in Richmond for 23 years. But he always kept his hives and vegetable garden going.

In winter he makes the hanging wooden frames for his beehives – the same model he designed on Imbros when he was 12. Only these days, the hives are painted cream and burgundy, like his Edwardian-style house. By summer the frames are filled with honeycomb. “If you get a good summer, you’ll be bringing honey out every week,” he says.

Malathounis’s honey is cold-pressed, which means it’s raw and no heat has been applied to process it, which is often the case with commercially produced honey. This is important to him. So too is only eating local honey – he doesn’t say why, it’s just stated as an incontestable fact.

He’s also heartily in favour of biodiversity. He doesn’t like manuka honey because it’s made from only one flower. His bees visit different flowers every day and at different times of the season. Although he’s not sure how far his bees fly in Melbourne, on Imbros he knew they went as far as 30 kilometres away, because sometimes the honey had the scent of a flower that only grew on a certain part of the island.

Mr Mala honey is available online or through Whisked at Prahran Market.