The green wedge suburb of Eltham may be better known for its bushwalks and birdlife than its coffee. But an increasing number of Melburnians are discovering its many new and established attractions. For its location on the city’s fringe, Eltham has always been a suburb of surprises. The Montsalvat artists’ colony, established in the 1930s by Justus Jörgensen, remains a centre for creative arts and the kind of location that regularly inspires “Why have I never been before?” wonder. Ben Mendelsohn went to high school in Eltham; so did Emily Browning. Now, business owners and restaurateurs take their craft as seriously as the artists who’ve long called the suburb home. We’ve partnered with realestate.com.au to explore the best parts of this transforming town in our Greater Melbourne series featuring up-and-coming suburbs.

With a tide of returning former residents alongside young families looking to put down roots, Eltham has found itself with a surplus of citizens seeking more than just the basics, and the area is undergoing a quiet upgrade. Even for those who don’t live there, there’s a lot to keep you occupied if you’re curious enough to visit. “We’re only a very small space,” says Little Drop of Poison owner Kobi Ruzicka. “But we try to do some creative food with what we’ve got.” Stop by for one of its renowned pumpkin cakes, and you’ll wonder why Ruzicka is so modest. “They’re actually gluten-free, but we don’t tell people that. We cook them in hemisphere moulds and stick them together with icing down the middle so they’re a little bit more fun.” Small Batch coffee is its other big seller during the day. In the evenings the focus shifts to natural wine and craft beer, and a menu that changes almost daily as the European-trained Ruzicka tries out whatever takes his fancy.

Ruzicka is noticing a definite change in the suburb, with many of his newer regulars having moved from inner suburbs. But what drew him to open Little Drop of Poison was a chance to revitalise a spot in the heart of Eltham’s town centre. “The location itself has been quite iconic for Eltham for some years – there’s always been a dive bar or something stuck in this little space, and I thought it might be time to give it a facelift.” Second Home may be one of Eltham’s newest cafes, but co-owner Catherine Westwood is a long-time resident. She grew up in the area before moving back three years ago. Together with Jason Jones (who she previously worked with on Mazzitelli and Porgie + Mr Jones), they’ve brought an unabashed inner-city cafe at the gateway to the Yarra Valley.

“We’re in an incredible building,” says Westwood of the renovated former industrial light factory that Second Home now calls, well, home. “It’s really blown people away.” As has the menu, which features many of the touches – triple-cheese toast, herb-filled folded eggs – that have brought Jones success elsewhere.

There’s more to this home away from home than the food. “On weekends we do a ‘libations trolley’,” Westwood says. “It’s a little cocktail cart that comes to tables and we make the cocktail right there. It’s a fun bit of theatre and people are loving it.” But good food is the core of its approach, and it’s one the locals have already taken to heart. “Eltham’s much more well-to-do and artistic than you may think,” she says. “There are a lot of people out here who value good food.”

If you’re after the basics, you’ll find them in Eltham, too. Doncaster Shopping Town is only a short drive away, and the Eltham train station provides easy access to the city and beyond on the Hurstbridge line. It’s that combination of almost rural living and the closeness to everything Melbourne offers – plus more affordable house prices – that’s making Eltham a desirable place to live, and it’s the new businesses that add to the many reasons to visit. Alex Marinelli at Papa Bear has lived in the suburb all his life, and is proud to call Eltham “up-and-coming”. “These days we get in a lot of people who’ve been here 20 years, and we also get a lot of what we call ‘inner-city refugees’. They have a lot higher expectations for their coffee, they’re looking for places with real in-depth coffee knowledge.”

Papa Bear focuses on premium seasonal coffee (by Axil Roasters) and meals with a vegan and gluten-free accent (four words: vegan raw caramel slice). For those after something meatier, the pulled-pork baguette with Vietnamese slaw and homemade chilli jam is filling in the best way.

Outside the cafe’s cosy confines, Marinelli says a stroll from the leafy fringes through to the heart of Eltham is the best way to take the suburb’s pulse. “There have been a lot of changes here in the last few years,” he says. “It’s getting much more of an inner-city feel, but there’s still a lot of the old Eltham around too, if you look for it.” At the one-time bike shop that houses Zen Den, Brittany Hogan (daughter of owner Julie) sees the rise of Eltham’s cafe culture as springing from one-time locals moving back from the city and bringing their developed tastes with them. “Demand for a more sophisticated style of coffee has really grown over the past two years,” Hogan says. “A lot of people here are taking on what’s been happening in the city, (and of course) there’s been a fair bit of demand for it out this way.”

For those looking for something to go with their coffee while they enjoy the surrounds, the corn fritters are a crowd-pleaser. The Hashta La Vista is a potato hash stack with wilted spinach, buttered thyme mushrooms, toasted pine nuts, poached eggs and hollandaise. “I try not to add ‘baby’ every time I say it,” says Hogan.

New cafes might draw the attention, but for Hogan, the heart of the suburb remains the forests that surround it. “It’s perfect for bushwalks, there are loads of bike trails and it’s great for a picnic. It’s just beautiful.”

The Eltham Farmers’ Market on the second and fourth Sundays of the month for the wide range of produce grown in and around the region.
Eltham Town Mall, 10–18 Arthur Street, Eltham
0407 431 366 St Margaret’s Anglican Church features a labyrinth that can be walked at any time. David Bowie sightings not guaranteed.
79-81 Pitt Street, Eltham
(03) 9439 9238

To explore the suburb in further detail visit the Eltham suburb profile at realestate.com.au. 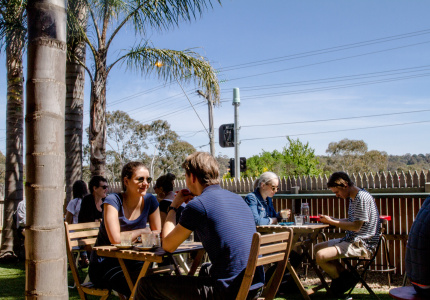 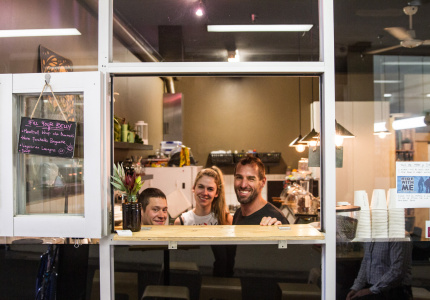 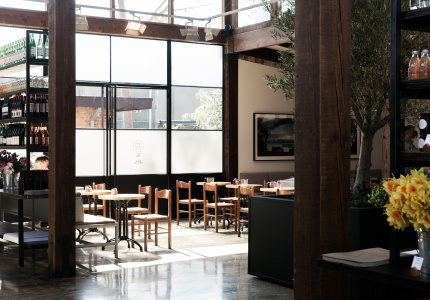 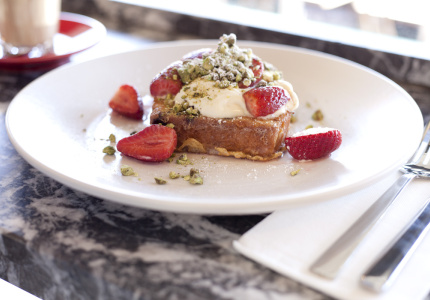