Would you drink a squid-ink beer? Or one made with belly-button yeast? Melbourne's mammoth beer festival has landed and there are 500 kinds to try. 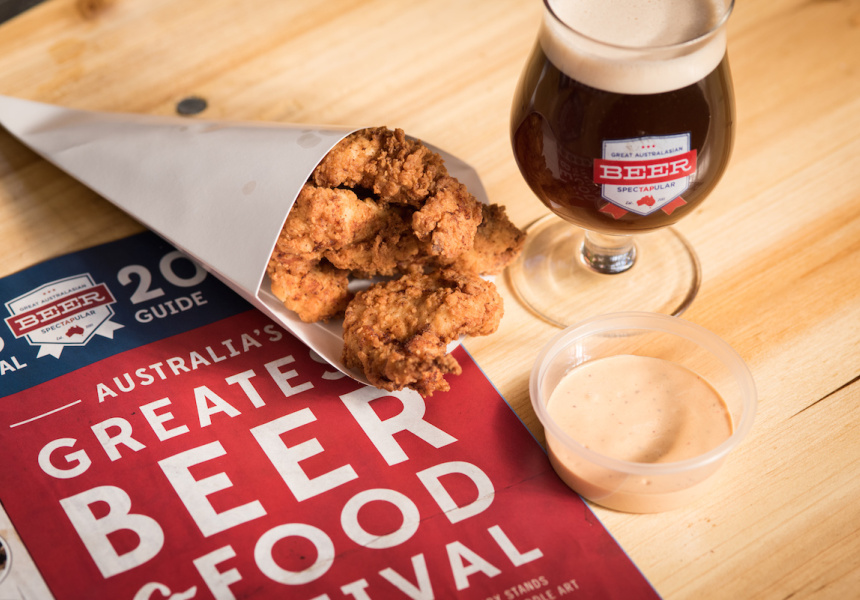 Since craft beer became a thing, the range of brands and styles on the market has exploded. You need a glossary to decipher jargon such as “milk stout” (a beer style); “Galaxy” (a breed of hops); and “brett” (a strain of yeast).

Now, multiply that confusion by 500 beers and you’re at The Great Australian Beer Spectapular (GABS), a mammoth annual beer festival at The Royal Exhibition Building. The difference is that here you have a fighting chance of overcoming the feeling of, “This is too much work, I’ll just drink my usual.”

“We’ve learnt so much from listening to people at past events, particularly newcomers,” Steve Jeffares says. He and Guy Greenstone held the first editions of GABS in 2011, at the The Local Taphouse, their pubs in Melbourne and Sydney. Since then it’s grown to a weekend-long festival in each city. This year it’s also headed to Auckland for the first time.

The festival acts as an unofficial summit for the brewing industry and its many, many groupies. Outside those circles its growing popularity is probably due to its accessibility. “It’s no longer just a beer festival,” Jeffares says. “There’s food, cider, entertainment, games and all that kind of stuff.” The 13 eateries taking part this year include Meatmother, Huxtaburger, Hammer & Tong and Mamasita. Whether you’re a novice or a connoisseur, the pull of so many brews is hard to ignore – 120 were invented specifically for the festival.

Some of this year’s weirdest creations include S’more Than A Feeling, brewed with marshmallows and biscuits; a strawberries-and-cream ale inspired by Wimbledon; and Mutagenic Cephalopod, a bizarre mix of seaweed, smoked-mushroom salt, chipotle oil and squid ink. There’s also 7 Cent Brewery’s Belly Button, made with belly-button yeast. Alongside these, there are 10 new ciders, plus plenty of normal, everyday beers made without human-derived ingredients.

“Above all else, we’re really conscious that with over 500 beers and ciders available, it’s overwhelming to many people, even beer fans,” Jeffares says. “I think we’re better than ever at creating an environment where people are encouraged to try lots of different things they’re not familiar with, but in a way that they’re learning and making informed choices, not just throwing a dart at a dartboard.”

The 54-page program is available as a hard copy, PDF or app. It lists every beer served at the event and classifies them using a traffic-light system. Green is “easier drinking”; orange “moderately challenging”; and red “more challenging”.

There’s also a simple guide that divides every beer into one of seven flavour profiles. Do you like coffee? You might like beers under the “roast” heading. If you’re a citrus or tropical-fruit fan, try beers under “hops”.

There are a few new attractions this year, too. The Yenda Wheel of Beer is an 18-metre-high Ferris wheel squeezed under the soaring ceiling at the Exhibition Building. “It’s going to come within a few metres of the dome,” Jeffares says. It’s $4 a ride, and all profits will be donated to former AFL footballer David Neitz’s motor neurone disease charity, Brewmanity. You can’t drink on the wheel, except for a pod called the Gold Glass, where you can taste beers with some of the country’s top brewers.

Then there’s The GABS Feral Beer Experiment, run in collaboration with West Australian brewery Feral. It’s brewed a base beer, which will be served one of seven ways: unaged and aged in new French oak; red-wine barrels; white-wine barrels; whisky barrels; rum barrels; and bourbon barrels. “Barrel ageing is one of the hot trends in brewing, and this is a really unique experiment that we’re excited by,” Jeffares says. It echoes the single-hop craze of a few years back; breweries would present several identical beers brewed using a different hop.

The Local Taphouse Sour Bar is another new addition. It’ll present 25 local and international sour beers, which is another hot trend in the market. “Sour beer is a strange new world for a lot of people,” Jeffares says. “Whether you’re completely new to sour beers or you’re an aficionado, we want to create a place to come and be helped through the process. The last thing we want is for someone to try a really complex sour and say, ‘I really don’t like that, that’s awful.’ Then they get turned off sours completely.”

The Great Australian Beer Spectapular is held over five separate sessions on May 20, 21 and 22 at The Royal Exhibition Building in Carlton. Single-session tickets are $36 when pre-purchased, and $42 at the door.