Almond milk has long been a dairy replacement for many. But Cameron Earl wanted to find a brand he actually liked and could use to make a latte. There was none. So he went out and made it himself. In February this year Cameron Earl, who doesn’t drink dairy milk and can’t stand soy, moved in with his girlfriend and reluctantly began to drink the almond milk she kept in the fridge.

“I hated it – the tetra pak stuff,” Earl says, referring to the cartons of mass-produced, processed UHT products at the supermarket. “It has a weird consistency and flavour profile with nothing that associates with milk or almonds.”

He could not get his head around the idea that these cartons of unappetising, “muddy water”, were, according to his girlfriend, the best option available.

Earl jumped online. He trawled through how-to videos. He bought the necessary equipment. And he made his first batch of nut milk. Establishing an almond-milk company was not part of Earl’s original plan. He simply wanted to create a decent dairy replacement for personal consumption.

But as he perfected his recipe and conducted more research into the nascent nut milk industry in Melbourne, his goal quickly changed. While Earl found that a number of health-food cafes and stores in Melbourne did make their own fresh almond milk, these products tended to be quite rich and sweet.

“I wanted to make something a barista could use,” he says. “I wanted a neutral base product that you could use with coffee.”

Earl’s home kitchen in Windsor became a laboratory. By day, he worked at The Little Ox cafe in Brighton, by night his world was almonds, blenders, strainers, tubs and scales. He trialled different sweeteners and found dates worked best. He experimented with different almonds and different ratios. Eventually, with a mixture consisting of 16 per cent almonds, his customers-turned-taste testers at Little Ox finally gave his product the tick of approval. And demand quickly outpaced supply.

“I just couldn’t make enough,” Earl says. So in stepped his friends and the owners of Ripponlea cafe, Hawk & Hunter, who are now silent investors in Earl’s company. After 5pm most days, the cafe’s kitchen transforms into the Almond Milk Co. headquarters. Tubs of South Australian almonds line the stainless steel benches, while three blenders filled with nuts and water whir in the corner of the room.

Earl’s milk is creamy, nutty and looks like dairy milk. But perhaps the most important thing is it blends really well with coffee.

“It has a nice, silky texture,” says David Willcock, a barista at Hawk & Hunter. “Soy thickens faster, but it thickens too much. Almond milk doesn’t solidify in your jug.”

While soy milk is still the more popular dairy replacement, baristas and waiters have noticed a serious uptick in the amount of customers asking for the almond alternative.

“We got almond milk in because the people were asking for it,” Two Birds One Stone barista Eliza Mills says. “Earlier this year, we had tables walk out because we didn’t have almond milk.”

When I met Earl in the second week of July, he had 550 litres on order. I checked in this week – he had 700 litres to deliver to more than 40 venues across greater Melbourne and Geelong, including coffee specialists such as Filter, Seven Seeds and Proud Mary.

Earl has competition though. At St. Edmonds in Prahran, you’ll find Sydney-based Inside Out’s pressed almond milk. At Yardmill in Toorak there is Melbourne-based Nuts Over Milk.

Raw milks, though, are not without their negatives. Earl’s product, while fresh and preservative-free, lasts only five days. Also, it’s a “live product,” so it should be avoided by the pregnant or elderly. Plus, it’s not cheap.

“Cafes are adding about a $1 to their standard prices,” Earl says. An almond milk latte at Coin Laundry, for example, costs $4.80. Its regular coffee costs $3.80.

“But that’s locally sourced, locally made, handmade. And, it’s really, really good for you,” Earl adds.

Raw almond milk is rich in a range of minerals and vitamins including vitamin E (important for healthy skin and cardiovascular health) and magnesium (good for bone health, muscle relaxation and nerve impulses). The mass-produced UHT brands, on the other hand, are rich in preservatives and additives and very high in sugar.

“As far as the health benefits go, it depends on the almond milk,” says nutritionist Leah Hunt, who designs new products at Pressed Juices. “If you are drinking it for its nutritional benefits, don't even bother with UHT. The almond content in these milks is so low you will not be getting much in the way of nutrition.”

With its growth in popularity, criticism of almond milk’s environmental footprint has also surfaced. A recent article in American magazine Mother Jones argued that mass-produced almond milk – the supermarket variety with only two-to-four per cent almond content – is environmentally unfriendly because of the amount of water required to grow the nuts, which are then drenched in more water to create the milk product. The article provoked some fierce responses, like this one from Slate, which argues the same criticism could be made of any water-intensive crop. And of course all of these pale in comparison to the heavy carbon footprint of water-intensive dairy-milk production.

For his part, Cameron Earl is diligent about reducing waste. The almond meal left over after his milk has been strained is used to make felafel and cookies at Hawk & Hunter. Recently, he even started dehydrating it to use in a body scrub.

“My intention was to create a product where there was no product,” he says. “And if I can get businesses and customers to enjoy it, and I can make a living off it, then we all win.” 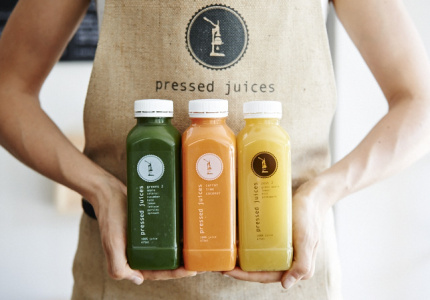 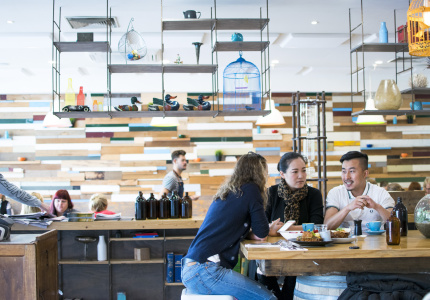