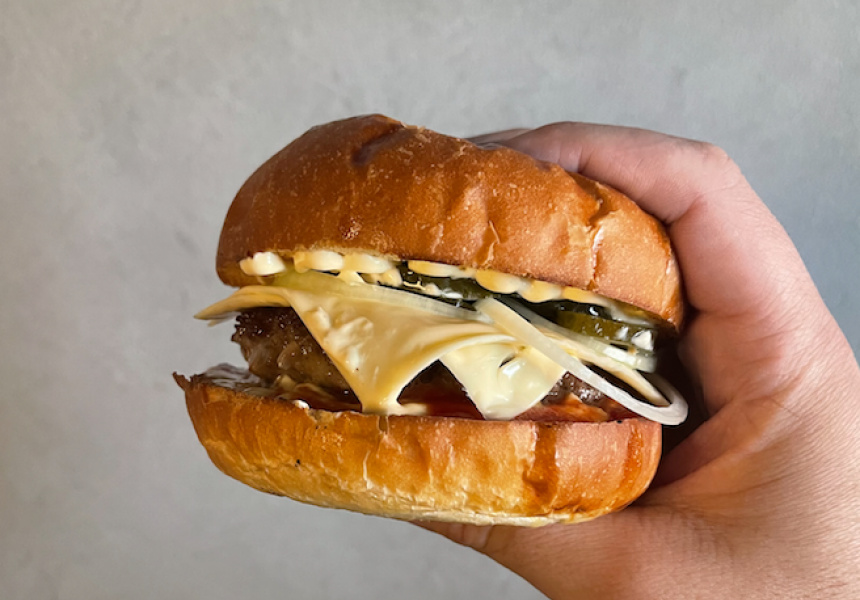 A cheeseburger is often only as good as the caramelisation of its patty. But Melbourne chef Charley Snadden-Wilson is taking that to the next level at his new burger pop-up.

Unusually, the resident chef at Collingwood wine bar The Moon (and former head chef at Etta and the now-closed Ramblr) uses frozen grated cheese in his burger patties.

“It was kinda born out of necessity – I had a block of Gruyere I couldn’t sell, so I decided to freeze it and grind it,” he tells Broadsheet. “Sure, you’re adding more and more fat, but it’s getting that deliciously crisp caramelisation from the cheese melting … [caramelisation is] crucial when it comes to a big, fatty burger.”

But you won’t find his burger at The Moon. Instead, it’s the headliner at Good Ragazzi, the Monday-only burger pop-up he launched last week at Good Gnocchi’s Carlton North outpost (which is generally closed on Mondays).

“We did 150 last week, so we’re gonna step it up this week,” says Snadden-Wilson, who runs the show with his sous-chef Shem Fitiao. “The response was so great.”

As well as cheese, the Ragazzi cheeseburger’s patty has a secret ratio of brisket and chuck, plus “good” pickles, pickled onion, ketchup and mustard on a toasted bun.

There’ll always be fries with aioli and a vegan option available, too; this week it’s a “slightly excessive sub” with roasted mushrooms and fermented chilli. Also expect desserts in convenient cups. Last week it was a “triflemisu”; this week it’s a fairy-bread pudding with brown butter, white-chocolate crémeux, and hundreds and thousands

In the booze department, find bottles of lo-fi vino and a “spritz du jour”.