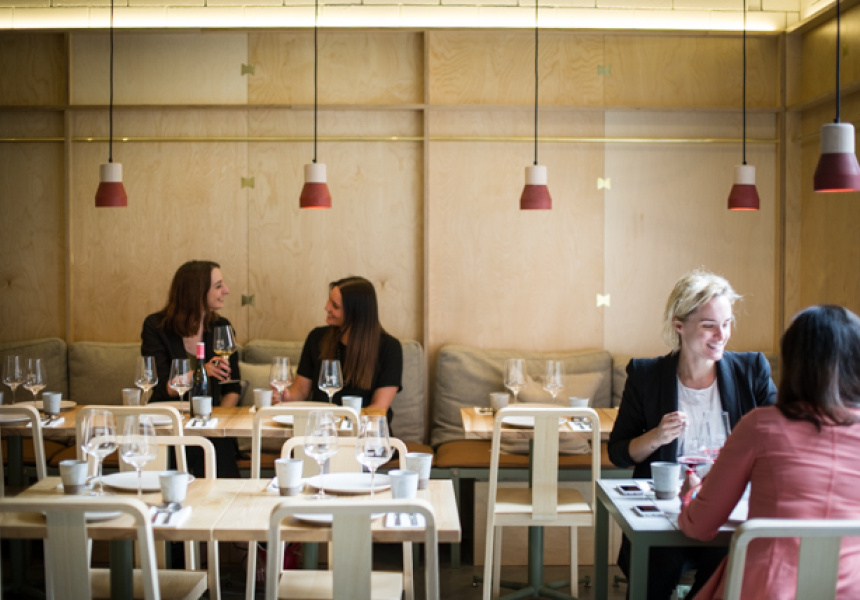 In Chinese culture a ruyi (which translates to “as you wish”) is a spiritual object or talisman symbolising good fortune. Sheng Fang’s family had their own ruyi, an heirloom passed down the generations until it was looted by the red guards during the Cultural Revolution. Fang made it his mission to find his own personal ruyi, incorporating his beliefs of what a ruyi is, thus Ruyi Dumpling & Wine Bar came to be; a collaboration with wife, Qian Qian Luo-Fang.

With a concept of calm and cool, light colours are used throughout, with Paul Hecker of Hecker Guthrie toning down the traditional Chinese colour palette to more muted reds and yellows, as well as their own namesake ruyi green. Sourced worldwide, the fixtures and fittings follow suit, with handmade ash coloured concrete and wooden lights from France, natural wooden chairs and stools imported from Milan, and vintage ‘70s tiles from a shop in Brunswick. All plates, water glasses, bowls and water pitchers are handmade in similar tones exclusively for Ruyi by Melbourne ceramic artist Andrei Davidoff, their subtle differences enhancing the naturalness of the Ruyi dining experience.

The kitchen is manned by two young guns previously of the Michelin-starred Royal Hong Kong Yacht Club, who are set to challenge your palates with their inspired combinations. Crispy prawns come smothered in a light strawberry sauce, the outer shell giving no hint to its gluten free status, while the chilli sauce at the base of the wonton dumplings could be served as a soup (almost). Vegetarians are well catered for; sweet tooths too, with their play on a traditional banana fritter served with fried frozen milk and ice cream a standout. A concise wine list highlights Australian and European offerings.