With a 3am start, long-lining snapper on Port Phillip Bay may not sound like everyone’s idea of a good time. Nonetheless, our ever-intrepid reporter Hilary McNevin got on board to cast a line with the fishermen. 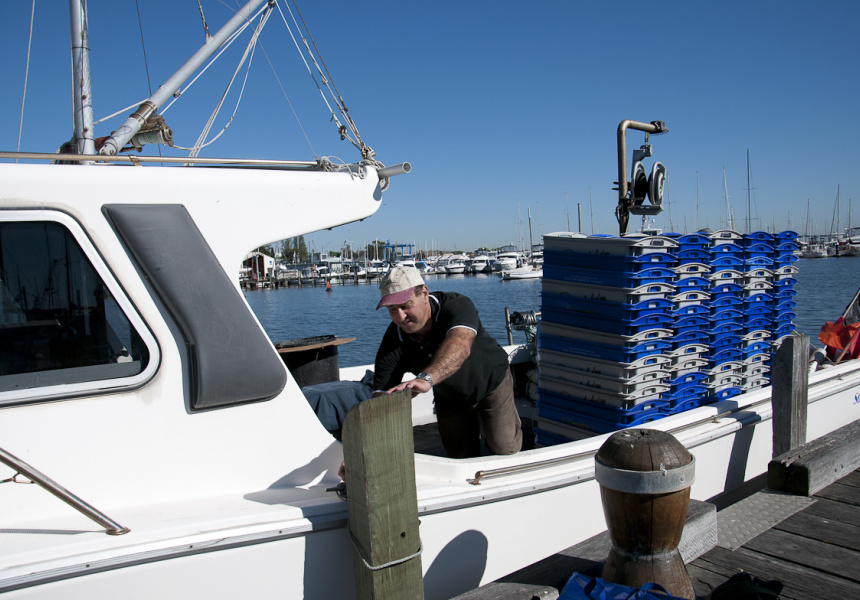 There were days gone by when being awake at 1am was about having fun, but when the alarm went off in the wee hours on Saturday morning, I hesitated for a moment – what the hell am I doing?

It’s the language of food that compelled me to explore the origins of one of our most popular summer fish to eat, the snapper. We often speak of buying local, sustainable fish species and supporting Victorian fishermen, so it was a desire to find the foundation to those words and witness long-line fishing with the focus on a targeted catch. This desire saw me climb on a boat at 3am in Williamstown to talk with fishermen Rob Carabott and John Gazan along with Melbourne University marine scientist John Ford.

It makes sense for fishermen to operate in a sustainable way, this is their livelihood and they don’t want to lose it, so scientists like Ford are welcome on the boat. This morning, he is recording the bi-catch that comes up with the snapper. “Bi-catch is what is caught inadvertently and doesn’t have commercial value as part of the fishing process,” he explains.

“I’m going to scientifically document what they’re pulling up apart from the snapper which is the target. In this method of fishing, this is pretty low but no one’s ever done a study on it, which is why I’m here.”

We travel in a south-easterly direction across the bay, a little bit past Rickett’s Point, and Carabott starts baiting the main-line. The mainline is about two and a half kilometres in length and short-lines called snoods are attached along it at even intervals; each snood holds the hook where Carabott threads the bait of squid and pilchards. There are 200 snoods holding one hook each, as the fishermen are only allowed 200 hooks on a long-line at one time, according to the state quota for commercial fishermen.

With the long-line in the water by 4.30am, we sit and drink instant coffee and eat sugary donuts. The passion with which all of these professionals operate is admirable and not just because of the hours they work. They are regularly faced with issues and obstacles that can get in the way of what they want to do, which is simply to fish, John Gazan says. “You’ll find most commercial fishermen are environmentalists,” he offers. “We view fish differently to say, a recreational fisher. We view the ecosystem as a food source, where recreational fishers see it as a sport.”

The care they have for fish is clear, even in small gestures. When a banjo shark is caught inadvertently, it’s bi-catch and needs to be put back. Gazan throws it in to the water and Carabott reprimands him for causing the shark to bellyflop. “That would have hurt him,” he calls.

By 6am Rob starts pulling in the long-line. It turns out to be a very successful catch. Each snood is brought in one by one by pulling on the main-line. Some still carry bait and nothing else, some hooks are empty and then the snapper starts coming up. Varying sizes from 2.5kg up to 5kg. The fish are beautiful with the blush-coloured skin shining in the morning light. They are killed quickly and humanely and put straight into an ice slurry. This is the best way to guarantee good quality fish at market. The boys are excited; they’ve caught about 140kg to 150kg of snapper. They pack the fish from the slurry into the iceboxes and by 8.30am take us into shore with a fast turnaround to get back out there and do it all again.

When they finish fishing, the catch will be taken to the wholesale markets and sold to the highest bidder.

What’s most inspiring is the unfailing enthusiasm of all aboard. “What’s great about this is that we’re so close to a city – the CBD is just there,” says Carabott, pointing back to Melbourne. “We’re so lucky to have this resource here. Let’s look after it.”