Gilson, a New Restaurant on the Gardens

A novel concept from the man behind Mammoth and Touchwood. 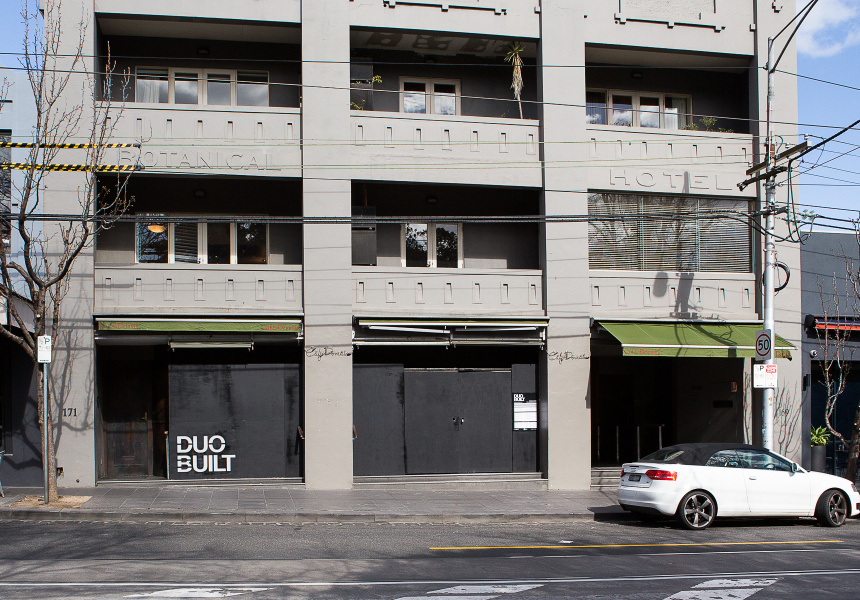 Occasionally, you’ll hear someone compare starting a business with having a baby. Want to know if the comparison holds? Speak to Jamie and Loren McBride. Just weeks before the birth of their second child, Loren announced a pizza joint across the road from Barry, the Westgarth cafe she runs with her brothers.

It’s now a month since the arrival of their daughter, and a year since Jamie opened Armadale cafe Mammoth. Yet the McBrides are adding another new member to the family: Gilson, a restaurant in South Yarra. Why now?

“The opportunity,” says Jamie. “Loren and I have lived around here our whole life and thought this was the best shop in the best street.”

Sitting on the Domain Road strip overlooking the south-east corner of the Royal Botanic Gardens, it’s hard to argue. The building’s former owners ran a counter-service eatery, Café Domain, for 25 years before deciding to sell. Having stripped it back to its bones, McBride is turning the site into a 125-seat restaurant he plans to open in November.

Taking inspiration from traditional osterias, Gilson aims to provide both a menu and space that work as well for a casual breakfast as for a celebratory dinner. While McBride is keeping the kitchen team under wraps for the time being, design firm Projects of Imagination (Chin Chin, Supernormal) are on board to translate a classically European idea into a fun, versatile space.

“So Gilson is not a cafe that does dinner, it’s a restaurant that does breakfast,” he says.

A casual restaurant that transitions from breakfast through to late-night dining isn’t a new idea. Despite this, it’s surprisingly uncharted territory for Melbourne, where cafes are cafes and restaurants focus on doing one thing well.

“There aren’t many places that nail all three services,” McBride says. “Cumulus is a great example – it’s a celebrated restaurant and people still go there for coffee and pastries. But there aren’t many locations in Melbourne that suit the model.”

For him, Domain Road does. “There’s what people expect from South Yarra, but there’s also a lot of development and youth, and there’s the park and the Tan across the road,” he says. “We want to make a fun, vibrant place that works as a destination and is a great place for locals.”

While Mammoth will continue to push the boundaries at breakfast, at Gilson there’ll be house-made pastries and jersey-milk pancakes and classic Italian fare such as tiramisu or ossobucco in the evenings. “Some of my favourite restaurants are the ones that create a really strong identity without being tied to a specific region or cuisine,” McBride says. “There’ll be a lot of wriggle room to play with different ideas and flavours, while providing food that’s timeless.”

With a one-and-a-half-year-old son, a newborn daughter and two new businesses in train, it’s been a big few months for the McBrides. “I think after this we’ll pump the brakes and settle in,” Jamie says, smiling. “I want this to be the sort of place our kids can grow up in. I want it to have that sort of feel.”

Disclosure: Gilson is slated to open in early November, 2016. Broadsheet Director Nick Shelton is a partner in the Domain Botanical Group, an investor in Gilson.