Gelato Doughnuts Are Here To Stay

When one food trend eats another. Gelatissimo has come up with its contribution to the doughnut frenzy. The Gelato Doughnut involves one big scoop of gelato (flavour of your choice) placed inside a ready-made vanilla doughnut, which is then placed into a pie-warmer for 45 seconds. It’s crispy on the outside and cold on the inside.

“We’ve got 32 flavours of gelato to choose from. Some people go for the creamy caramel, some go for something a little fruitier,” says Gelatissimo Carlton owner, Anthony Ursini. “They’ve been really popular so far,” he adds, unnecessarily.

After trialling the doughnuts to great success in Sydney and Queensland, Gelatissimo decided to make them a permanent part of the menu here as well.

There’s definitely something of a gelato drift within the city’s broader doughnut craze. Carlton’s Pidapipo offers the Brioche con Gelato, a scoop of gelato sandwiched between two pieces of warm brioche bread.

Fritz Gelato developed a hot-cross bun ice cream during the Easter period this year, which it then recommended sandwiching inside an actual hot-cross bun. Newcomer Truck Stop Deluxe fuses two ideas with a doughnut ice-cream sandwich.

You may remember Doughboys Doughnuts and Gelato Messina's (all-too-fleeting) “doughsundaes” collaboration. Although their graceful shoving of a scoop of Messina into a doughnut delighted everyone, they have no plans to re-form the partnership.

But what's coming up may be even better. “There’s going to be an ice-cream bar built into our new store (which is slated to open in October), but I can’t say any more,” says Doughboys co-founder, Walter McKenzie. Consider us curious. 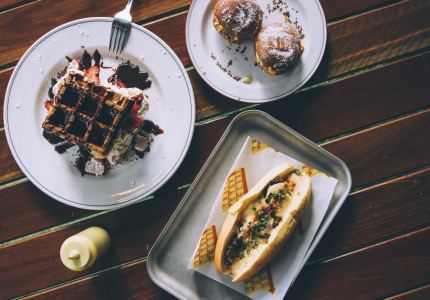