Instead of lifting her roller door to sell sourdough, Maaryasha Werdiger now has a dedicated shopfront for her entirely kosher operation. And, just as before, she’s pulling crowds with her sourdough loaves, pillowy focaccia, beautifully braided challah and swirly chocolate babka. 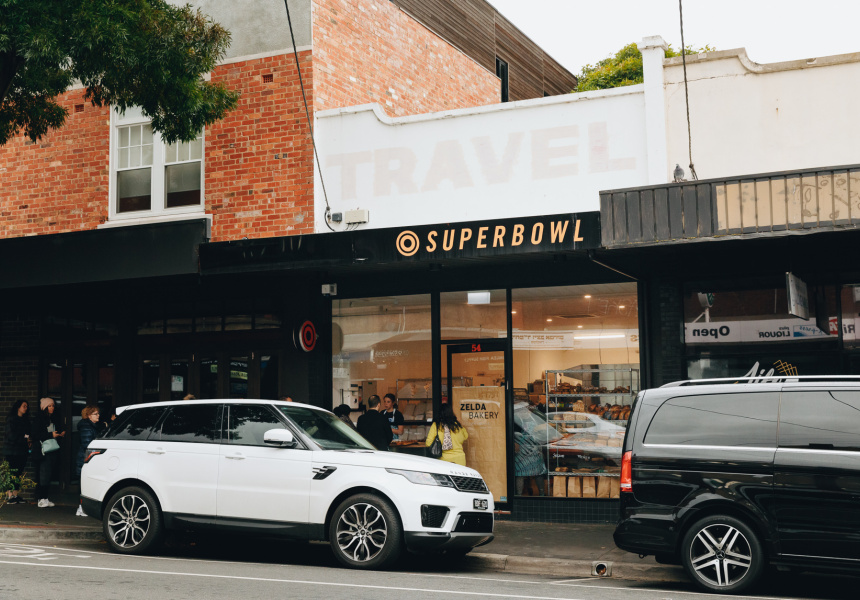 Maaryasha Werdiger didn’t set out to become a baker. She’s a trained physiotherapist and still hasn’t given up her license. But she’s managed to create a sourdough micro-bakery that regularly has queues down the street – and sells out within hours.

Her entirely kosher operation, now called Zelda Bakery, recently moved to a new home on Glen Eira Road in Ripponlea. Though it’s already gained a loyal following in Melbourne’s Jewish community through a series of relaxed pop-ups hosted out of Werdiger’s home. “It was a hobby that went out of control,” she tells Broadsheet.

The infatuation began 10 years ago in Jerusalem, where Werdiger was living at the time, when someone gifted her a sourdough starter. “Back then, only hardcore hippies made sourdough,” Werdiger says. “There were no resources. I tried to make bread with the starter it and it wasn’t good, so I became totally obsessed with how to make it better.”

Obsessed isn’t an overstatement. Despite being just postpartum, Werdiger spent her maternity leave (and beyond) perfecting her sourdough recipe. “I would be rocking the baby with one hand and kneading dough with the other,” she says.

By the time Werdiger returned to Australia six months later, she could make a pretty decent loaf of kosher sourdough, which she says wasn’t readily available at the time.

At the request of family and friends, she began hosting sourdough workshops to pass along her tips. Ten loaves were required for each workshop, and Werdiger would spend an entire day baking them – one at a time in a pot – to get the crusts perfect. Then she would stay up all night testing recipes for sweets such as babka, cinnamon buns and croissants that she’d share with friends on Saturday mornings.

“I did all-nighters for, like, three years straight,” says Werdiger. “But the whole time I felt very restricted baking just 10 loaves for the workshops. I wanted to do more, but I told myself that was ridiculous: I have a job; I have a career.”

Until one day, the switch flipped. “I was like, actually, I can do whatever I want.”

So, she slowly scaled back her physio work and converted the kitchen and garage of her Elsternwick home into a makeshift micro-bakery. Initially, Werdiger was making loaves to order, plus whatever freshly baked pastries she felt like preparing for pick-up day. Customers would arrive hungry and in hordes.

“The first time I opened the roller door, there was everyone waiting,” she says. “They even came into my home kitchen. I’d be filling doughnuts; there was mess everywhere.”

Moving into a separate, permanent space was a relief for both Werdiger and her family, who’d grown tired of navigating the ever-expanding home bakery. She now sells her bread and pastries to the public two days a week, with plans to eventually scale up.

The menu changes often, with a few constants: loaves of sourdough; pillowy, dimpled focaccia with rotating toppings; thick sesame rings; and swirly chocolate babka. “Babka is a staple in the Jewish community,” says Werdiger. “You have it every week.”

Soft, beautifully braided challah, another Jewish staple, is also available regularly. And then there are the pastries, which may include Portuguese tarts, sourdough doughnuts (or “sourdoughnuts”, as she calls them), fruit danishes and croissants. “It’s very much a mix of old and new,” she says, “based on European or Scandinavian styles.”

To keep everything kosher, Werdiger adheres to a number of essential requirements: “There is a separation between dairy and non-dairy, I can only use ingredients [that are] certified kosher, I can’t work on Shabbat (Saturday), the dough is all blessed [with] a special blessing after mixing,” she says. Plus, “all breads are vegan, as Orthodox Jews do not mix dairy and meat products, and bread needs to be able to be eaten with both”.