Here, yakitori skewers are the specialty, but there’s also stellar vegan ramen and a solid selection of sake. 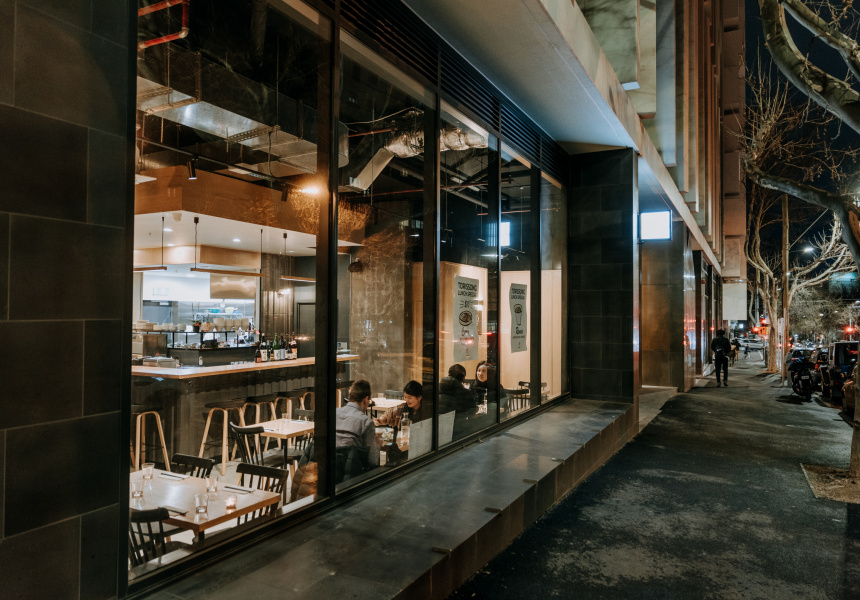 Torissong is Jinwook Park’s first solo gig. The Korean-born chef was senior sous chef at Sofitel’s No35 for seven years, and prior to that demi-chef de partie at Shane Delia’s Maha.

The Queensberry Street eatery is true to Japanese philosophy: uncomplicated, with industrial elements, black and blonde timber, and a 13-seat bar in the centre of the room.

Park says the relatively small space – compared with his former workplaces – is a chance to prepare more accessible food, and build a personal connection with his guests.

“Every chef’s dream is to do what they want to do. I just want to try by myself,” Park says. “I want to really get honest feedback about how [people] are feeling about my food.”

Sticky yakitori skewers are the speciality here, made using Hazeldene chicken, farmed just west of Bendigo. The yakitori menu is broken down into cuts – skin, neck, oyster, breast, drumstick, thigh and wing – with a choice of sea salt or tare, a semi-sweet Japanese dipping sauce.

Park even named the restaurant after them (tori means game bird, usually chicken) and song in English loosely translates to “birdsong”. The logo is a chicken playing piano. He says it was a bit of a spontaneous move.

A robata grill churns out deftly charred vegetables and seafood, such as sweet potato with butter and black salt, and king prawns with miso and rayu, a type of chilli oil.

Park’s experience in contemporary French cuisine is most evident in his ramen broth. It’s developed like a consommé and is more delicate in flavour than is traditional. The Shoyu ramen is clean, clear chicken broth with wood ear mushrooms, garlic chives and a soft-boiled egg. A yuzu kosho ramen is lighter still, and a vegan ramen sees more of those robatayaki vegetables.

Park designed the menu with drinking in mind, so you’ll be encouraged to order from the Japanese-heavy wine and beer list. There’s also a solid selection of sake, and if you ask Park, he might lead you to some off-menu options.

This article first appeared on Broadsheet on September 12, 2018. Menu items may have changed since publication.