There’s a good-time wine bar up a ridiculously colourful stairwell, a tiny 25-seat speakeasy from the owner of Pie Thief, a beloved pub that’s been recently resurrected (with $6 tacos), and a Hop Nation-Navi collab with 1.5-litre beer magnums and Wagyu-butter pretzels. It’s a good time to be boozing in the inner west. Hotel Westwood
When Footscray’s treasured Reverence Hotel closed in early 2019, it was a massive blow for the west side’s live-music scene. So it was a relief to hear Cult Leader – the management group behind Cherry Bar and Yah Yah’s – was stepping in to take over, reincarnating it as Hotel Westwood. Live music remains a focus, but Westwood’s programming will be wider ranging than the Reverence’s underground line-ups. Expect a big genre mix across two revamped band rooms. (One has a fireplace in the shape of a turret – the installer heard “make it look like a castle”, rather than “make it look like it belongs in a castle”, says Nicholas Jones, the managing director of Cult Leader.) There’s also a warm, lived-in front bar with beers served in old-style dimpled pint glasses, and a beer garden with tropical-inspired cocktails (including one that “tastes like alcoholic Ribena”). Rev fans will also be pleased to know the cheap tacos have made a comeback – they’re $6, as are the super crisp empanadas.

Baby Snakes
The co-founder of The Moon in Collingwood and Milton Wine Shop in Malvern, Mark Nelson, is taking an all-fun, no-fuss approach to wine at his new good-time bar. He calls Baby Snakes “aggressively not pretentious”. You’ll find it on Chambers Street up a ridiculously colourful stairwell with bright pink walls, purple stairs and lime-green railing. “We’re still not sure what it is exactly – a wine bar or a dive bar or a boozer,” Nelson says. Regardless, it’s an excellent place to crack a bottle. Past favourites have included Bobar’s ultra-light and slightly spicy Yarra Valley syrah, and a “mistake” carmenere rosé from Dirty Black Denim. There are also two frozen cocktail machines, which churn out light and frosty Margaritas and a frozen version of Stomping Ground’s Passionfruit Smash sour. To eat? Stacked deli sangas such as Reubens, Cubanos and a spicy Szechuan-eggplant number, as well as cheese and charcuterie boards. Otherwise, the team from Slice Shop Pizza downstairs is happy to run a pie up to your table.

Trouble in Dreams
Aaron Donato has hit a trifecta on Barkly Street. He runs the beer-focused Bar Josephine and zany pastry shop Pie Thief, but – along with cocktail-book author Chad Parkhill – he recently opened a surreal new bar right between them. Trouble in Dreams is a tiny 25-seat speakeasy that pays homage the world’s great cocktails and their inventors. “We’re taking a few cues from a long tradition of speakeasy-style bars from around the world,” Parkhill says. The regularly rotating list blends originals with cover versions of influential and interesting drinks from bars worldwide, with each cocktail’s creator getting a menu credit. The fresh, spritz-y and slightly astringent Champagne Cocktail, for example, was invented at New York’s now-shuttered Nitecap and blends the bitter French aperitif Suze with passionfruit liqueur and cava, a Spanish sparkling wine. Other Parkhill creations might include an adventurous Sloe Gin Fizz or a herbaceous absinthe-spiked blend. The wine list, meanwhile, is natural without being obnoxiously so, listing mostly minimal intervention styles, but with varied flavours and origins.

Zymurgy
Beer and barbeque. It’s a familiar concept, sure, but this new West Footscray spot by Footscray’s Hop Nation Brewing Co and Navi’s Julian Hills punches well above its weight. It’s like a barbeque at your mate’s place, if your mate brewed boundary-pushing beers and had fine-dining chops. Here, there’s a focus on all-things fermented and a charcoal-fired menu that Hills cooks on a Brazilian-made grill and rotisserie over red gum and mallee root. The menu includes grilled sourdough pretzels with smoked Wagyu butter, ox-tongue Reubens with homemade kraut and Comté, and black-garlic chicken with smoked eggplant. Around 10 Hop Nation beers are on pour at the bar, including an organic lager, a tropical mango gose and an oatmeal stout. There’s also a cocktail tap and a wine tap, plus cans of Hop Nation’s Ray Seltzer and 1.5-litre beer magnums. Bonus: while Zymurgy started out as a beer garden only, there’s now an indoor dining room. 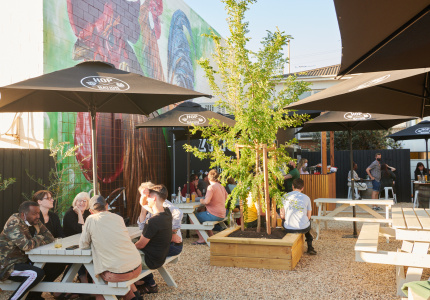 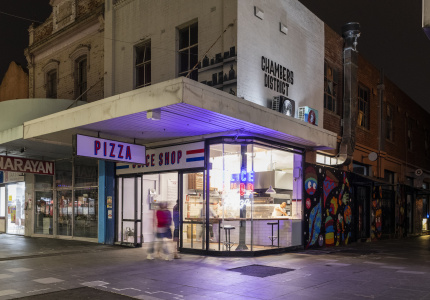 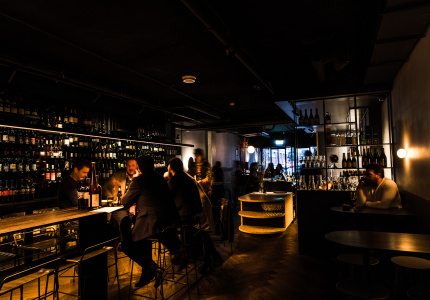 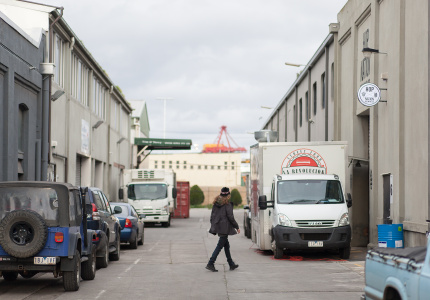