Some love it. Some think it’s a herb sent from hell to ruin tacos. Does coriander taste like shampoo lathered into wet hair to you? Blame your genes. A genetic survey of 30,000 people found that if you have a variation in one of your odour-detecting genes (specifically the one called OR6A2), you perceive the taste of coriander differently. Some people say it tastes like licking a nine-volt battery. Others say it tastes like bug spray … but the general consensus among those with the coriander-hating gene is that it tastes somewhere between dirt and soap. Definitely not fresh and zingy.

There’s a large portion of the internet dedicated to hating coriander (or “cilantro” as Americans call it). I Hate Cilantro has more than 18,000 Facebook fans, and the website version has a space where people can write haiku poems about “the most offensive food known to man”. Like this literary gem:

Some people want to burn coriander plantations en-masse, but there are lots of people who love it.

“We couldn’t live without coriander – it is to Indians what basil is to Italians,” says Manasi Gurram, daughter of Rajoo and Shaloo Gurram, chefs and owners of Bombay Street Kitchen. “The smell awakens your senses. It’s such a pretty shape and its vibrant green leaves liven any dish.”

It’s not just the leaves people love (or love to hate). “Every single part of coriander is used in Indian cooking,” says Gurram. “The roots and stems can be pureed or chopped finely and used in curry pastes; the stems and leaves are used to add a fresh dimension to any savoury dish; the seeds are roasted and can be ground coarsely to add texture and subtle flavour, or can be made into a fine powder to form the basis of many curries.”

Coriander is also a huge part of Mexican food. Bruno Carreto, owner of Melbourne restaurant Los Hermanos Mexican Taqueria was born in Mexico and grew up with the fragrant herb. “I have never known a world without coriander,” says Carreto. “It’s fresh, zesty and can balance salt, chilli and fresh tomatoes in a way no other herb can.”

It appears in more than half of the dishes on the menu at Los Hermanos. Inevitably, some people ask for the coriander to be omitted from their meal. “When I let a taco go without coriander, I’m a little disappointed because I know the balance and freshness won’t be there. It’s like imagining Melbourne without coffee.” Terrifying.

Gurram fights for the herb when a coriander-hater comes in. “We explain to them the coriander powder we use in curries is so well balanced that they won’t even know it’s in there.” But it is a losing battle? Can coriander-haters be turned around?

If you hate coriander, but can put aside the soapiness, know that it’s good for you. “It’s an ingredient in a lot of Ayurvedic remedies, but mainly it helps digestion and is good for the heart,” says Gurram.

Still not convinced? Try it in alcohol. Coriander is the second-most-common botanical in gin, after juniper. If you can taste a citrus-y note in Tanqueray London Dry gin, that’s the coriander. Coriander seeds have a strong lemongrass flavour when crushed.

Its seeds are also used to brew beer. Belgian-style wheat beers often swap out hops for other herbs and plants, such as coriander seeds. Make sure you shout your coriander-hating friends a Hoegaarden next time you’re out.

Be warned, too much coriander is a thing. It’s a narcotic if taken in large quantities. It received the nickname “dizzy corn” after people observed its effects on grazing animals that strayed into patches of coriander.

No matter where you are on the coriander-hating spectrum, there’s a dish to suit your tastes. Except maybe if you have the gene. Then you can’t be helped.

Where to try entry-level coriander:

Issan sausage made from pork, garlic, coriander, pepper and cooked rice at Spice I Am, Surry Hills

Emily Naismith is a founder and host of Ingredipedia, a factual food-fight podcast made in Melbourne. To learn more about coriander, listen to the coriander episode. 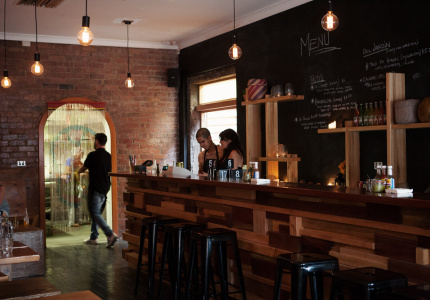