Why Am I Eating That?

From lobster rolls to smashed avocado, here's how Melbourne's most popular dishes ended up on our plates. 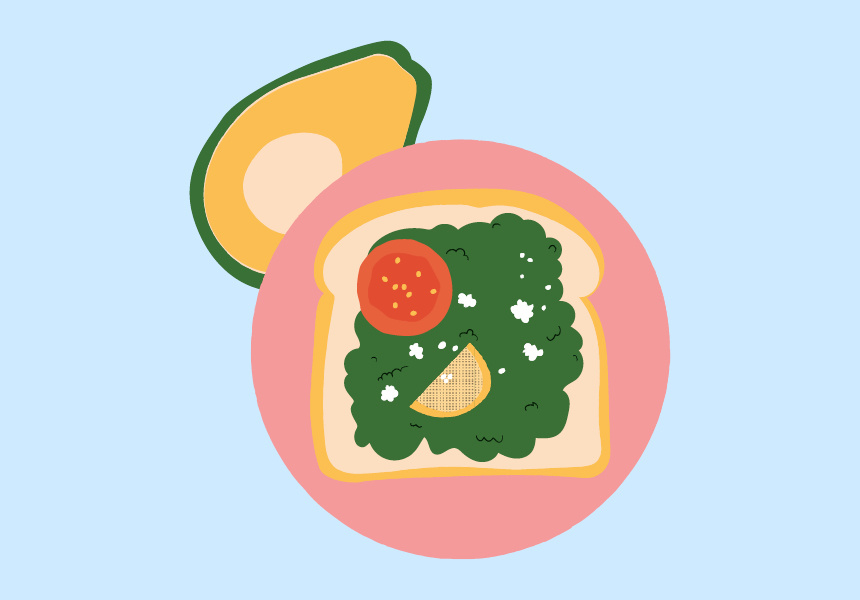 There was a time when beef Wellington was in vogue and chiffon cake was to housewives what salted caramel is to food bloggers. Society, technology, culture, war and celebrity are just some of the factors that influence what ends up on our plates. We dug into the archives and spoke to experts to investigate how six ubiquitous dishes became the status quo on Melbourne menus.

LOBSTER ROLLS
There was a time in colonial North America when lobsters were so plentiful they were used on hooks as bait and in gardens as fertiliser. Today, restaurant patrons look nervously upon the “market price” of lobster on menus.

Back in the late 1800s, lobster canneries lined the coast in Maine. The crustacean was so abundant that a can of the stuff cost less than a quarter of the price of baked beans. It wasn’t until those further inland began taking coastal holidays by train that lobster became popular; they returned home with a taste for the “exotic” seafood.

Lobster rolls couldn’t have existed before 1916 when frankfurters were sold in buns and called hot dogs and Walter Anderson, who later founded American hamburger chain White Castle, invented hamburger buns. A heated debate follows as to whether Connecticut, Maine or Boston was responsible for making them fashionable, but chef Andrew McConnell (of Luxembourg Bar & Bistro, Cutler & Co., Cumulus Inc., Builders Arms Hotel and Supernormal) first ate one on holiday in New York in January 2010.

“I thought it was good but it didn’t really blow me away. That drove me to do a really good one,” he says of his lobster roll, made famous when Golden Fields (now Luxembourg) opened in 2011. It is also now served at Supernormal in Melbourne's CBD.

Aside from lobster’s culturally appointed luxury, McConnell believes its popularity stems from restaurants serving something people don’t often prepare themselves, due to cost. Then there’s Australia’s food culture, where inspired chefs strive to create the best version of something they’ve tasted elsewhere. But will lobster rolls stick around?

“The same questions were asked a few years ago about Mexican food,” says McConnell, “And that’s now a staple for a lot of people. Hopefully lobster rolls will go beyond a trend.”

SMASHED AVOCADO
Forty years ago, when Katrina Myers’ parents planted avocado trees on what’s now the Barham Avocados farm in New South Wales, most Australians had never heard of the fruit. Those born into the first half of Generation X lived avocado-less childhoods, while Generation Y and beyond were raised on the first smashed avo to hit our plates – baby food.

Australians are eating around 60 per cent more avocados per annum than they were 10 years ago, according to Avocados Australia Ltd. Myers agrees that “nature’s butter” is more popular than ever. She believes we are eating more avos for three reasons: awareness of health benefits, ease of preparation and their agreeable taste.

One reason we’re seeing its proliferation on menus is it’s a low-labour and high-demand dish – with big profit margins. Whipping up a large batch of smash is simple: add lemon to prevent oxidisation, some olive oil and salt and the chef is good to go.

Nathan Toleman (of The Kettle Black and Top Paddock) remembers being one of the first to serve avocado with feta when he opened APTE in Alphington nine years ago (although the avo was fanned, not smashed) – but its origins stretch back further.

Sydney chef and restaurateur Bill Granger started serving a simple dish of avocado, lime, sea salt and olive oil on toast at his cafe, bills, in 1993. “I also put it in my first cookbook in 1999 called Sydney Food.” He tells us the simple dish continues to be popular at his restaurants in Sydney, London, Tokyo, Honolulu and Seoul.

Granger says he can’t take all the credit, though. “Avocado was on a list of sides that went with toast. So I’ll give credit for the creation of the dish to our customers who put it together.”

As for the spread of smashed avocado to New York and international cities – Granger has no doubt that, “Australian cafe culture is responsible for all of it. I’m certain of this.”

KALE
It’s possible that, with the 2013 release of the Fifty Shades of Kale cookbook, the world reached “peak kale”. While it might feel like the favoured green of today's clean eaters is everywhere these days, its ubiquity has a long history.

Thought to have been introduced to Europe by the Celts in 600 BC, kale was so commonplace that kail, an obsolete Scottish word, was once used to refer to the evening meal. During the Second World War it was the poster vegetable in the UK’s “Dig for Victory” campaign because of how easy it is to grow, and its use as a nutrient-dense supplement during rationing.

Following a 75-year hiatus, kale has found its cool, powered by an increased awareness of healthy eating and celebrity endorsements. Gwyneth Paltrow championed kale chips in a cooking segment on Ellen in 2011, and Pete Evans brought it into home kitchens with his 2014 cookbooks, Family Food and Healthy Every Day. This coincided with the increased popularity of organic and paleo diets, and the sweeping cult of the superfood (also see: acai, chia, quinoa). That kale is inexpensive and versatile doesn’t hurt either.

It’s difficult to pinpoint kale’s rise to fame, but Pressed Juices is largely responsible for popularising its use in drinks in Australia. Inspired by the growth of the American pressed-juice market – exploding first in LA, then New York – founder Leo Pegoli opened stores in Melbourne and later in Sydney. The company is now into its third year and has played a huge role in integrating the green-juice lifestyle into everyday routine.

Our obsession with healthy eating is driving kale’s boom, but popular cafes are propelling the trend. In Melbourne, Northcote cafe Barry serves it instead of toast with a soft-boiled egg. Combi in Elwood blends it in drinks and puts it on top of raw pizza. Reuben Hills in Sydney bakes kale with eggs and it often pops up in Kitchen by Mike’s salads.

BARBEQUED BRISKET
We already know our obsession with barbequed brisket was inherited from the US, specifically Texas and the Deep South. But it’s likely butchers originally smoked this inexpensive cut to add flavour and tenderness – in other words, so they could actually sell it.

Barbeque has technically been around since humans figured out how to suspend an animal above a fire, but German and Czech butchers are generally credited with bringing smoked brisket to Texas. Anthony Puharich, celebrity butcher and co-owner of Victor Churchill and Vic’s Meat Market says that while barbeque, “Has been the icing on the cake with respect to this cut being transformed into this highly desirable, cultish cut,” it’s only one part of it. In the last three years, Puharich says brisket – the lower chest or front underside of a cow – has doubled in price. He blames pop culture.

“It’s the My Kitchen Rules and Masterchef effect. It’s food magazines, it’s restaurants, it’s chefs, it’s TV, it’s people seeing these cuts on menus, trying them and loving them.” Brisket’s skyrocketing popularity means that demand outweighs supply. “I’m genuinely worried about this product probably not even appearing in butcher-shop window displays. It’s the hottest product, without question, across every single meat group,” says Puharich, before adding, “Every cut’s gone through that white-hot demand. Ten years ago it was lamb shanks, five years ago it was oxtail, so it is the newest in-demand product.”

Chefs adore the cut; aside from being relatively inexpensive, slow-cooking quality, fatty brisket over a barbeque practically guarantees tenderness. But Puharich says that people are starting to appreciate texture and flavour more than ever. “It over-delivers with regard to textures, that gelatinous quality that brisket has when you cook it nicely, and the flavours of it are just phenomenal,” he says.

CHIA PUDDING
You’ve heard people refer to salvia hispanica – that’s chia – as a superfood, but you probably didn’t know that it’s part of the mint family. These tiny seeds have been getting stuck between teeth since the time of the Aztec Empire, but have only been labeled a “superfood” in the past 15 years. There’s no official or legal definition for the ubiquitous term, although it’s generally understood to refer to high-nutrient foods. Seeing as research in the early ‘80s had already discovered chia’s nutritional value (mainly fatty acids, protein and vitamins), it’s likely that product marketing, celebrity endorsement and an increased interest in health have led to chia being recognised as a superfood.

Chia’s popularity also spiked following a number of big-name public mentions; from Dr Oz’s continuous chia endorsement on Oprah, to Christopher McDougall’s mention of it in bare-foot running bible Born to Run. Nutrition Business Journal and Nielsen’s estimate that chia will be a $1.1 billion industry by 2020.

One Aussie farmer, John Foss, spied the trend early. After heading to Mexico to follow up a study on a small group of healthy individuals in an otherwise unhealthy population, he discovered the only difference between the groups was chia consumption. He analysed the seeds, realised their nutritional value and then capitalised on the lack of supply. He founded The Chia Co. in 2003 and launched the retail brand in 2009. A decade after the company’s inception, Chia Pods – individually packaged chia puddings – hit supermarket shelves.

“People have been creating their own chia puddings for years, which has always excited me,” says Foss. “Kelly Slater became our global ambassador when we noticed an Instagram post he shared of his own homemade chia pudding.”

CARAMELISED PORK BELLY
Pork belly futures were traded in the US from the early ‘60s up until 2011 when frozen bellies had long lost their relevance. But as Dan Hong (executive chef of Merivale’s Mr. Wong, Ms. G’s, Papi Chulo and El Loco) points out, pork belly has been the most prized part of the pig in Asia for centuries.

“The Western world has only really embraced it in the last 10 to 15 years,” says Hong. “Pork belly has the best of both worlds; it’s got that layer of fat, then meat, then fat, then meat and if you roast it it’s got that really crispy skin. I think that’s why everyone loves pork belly.”

Hong recalls pork belly sneaking onto Australian menus when he first started cooking in the early noughties. There was a transition from duck confit to pork belly sparked, in his opinion, by Quay’s Peter Gilmore, who served the latter with scallops around 2001.

“It’s like fashion. A few years ago, Chanel decided to rerelease espadrilles and now all chicks are wearing espadrilles. You can consider Peter Gilmore one of the best chefs in Australia – he’s like a big designer who decides to put pork belly on the menu and boom, it just trickles down,” he says.