Connoisseur Gourmet Ice-Cream’s new Brooklyn Collection features the Bed-Stuy, which pairs pretzels with peanut butter and sweet cream. In partnership with the collection, we speak to the locals turning pretzels into high-art. 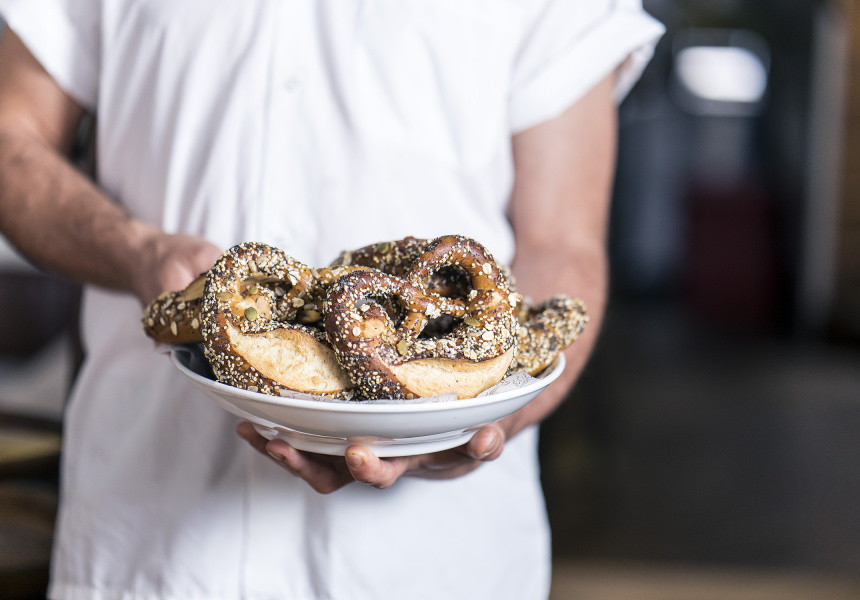 Zev Forman grew up in New Jersey. Back then he couldn’t have guessed regular family road trips to Philadelphia would be linked to his adult life as a Melbourne-based chef and business owner.

“Guys stand on the highway and sell pretzels,” says Forman. “I remember stopping on the side of the road to buy them.” Forman founded Melbourne bagel joint 5 & Dime in 2014, and says his singular memory contributes in a big way to his fondness for the pretzel. “New Jersey is halfway between Philly and New York,” says Forman. “Although everyone in New York thinks of that classic pretzel shape, Philadelphia pretzels are shaped in a figure-eight. They have a bit of a different flavour, but they’re awesome.”

Like all of 5 & Dime's bagels, Forman's pretzel bagels are boiled and baked on site. Forman has some advice for identifying an authentic pretzel from the imitators. He says real pretzels have a rich, brown colour and a subtle, malty sweetness. This is because they’re dipped in lye, an alkaline solution.

“The most important thing is that pretzels are cooked in lye and not baking soda – a real pretzel shouldn’t taste like bi-carb, it should taste like malt,” says Forman, adding that the combination of malt and saltiness is key to a pretzel’s appeal.

At 10 William Street, the much-loved Italian diner in Sydney’s Paddington, owner Enrico Paradiso and head chef Dan Pepperell planned on doing a bagel on the antipasti menu, but decided a pretzel was more appealing. “We went with pretzel and bortaga,” says Paradiso. “Bortaga is mullet roe that’s cured and dried in the sun. The pretzels mix really well with the flavour of the bortaga. In particular the caraway seeds on the pretzel are good with the smoked oil we use in the dip.”

Paradiso says despite his fondness for the pretzel as an ingredient, his team decided not to bake it in-house. “Pretzels are kind of hard to make, which is why we source ours from the Organic Bread Bar in Paddington,” says Paradiso. “You need a proper baker.”

Forman thinks while variations on the pretzel are important, people are mostly attracted to them because of what they represent. “I know when people ask for pretzels they’re thinking of New York,” says Forman. “Eating a pretzel on the street covered in mustard is really a quintessential New York experience.”

Few know this better than top New York-based pastry chef Sam Mason. The mastermind behind OddFellows ice-cream in Williamsburg, Mason has been responsible for introducing Brooklyn residents to wild flavours such as “chorizo caramel swirl” and “tobacco, smoked chili and huckleberry”. Having collaborated with Connoisseur to make the Bed-Stuy, using peanut butter, pretzel and sweet cream, Mason says his love of using pretzels in ice-cream is to mimic the crunch of potato chips, and thinks small pieces are the best way to add the pretzel flavour.

“The outside of the pretzel is where all the dark, malty, pretzel flavour is,” says Mason. “The more of that ratio, the better. It’s from the caramelisation of the malt. It’s almost like when you make a bagel, the flavour happens in the oven. That’s where that sexy pretzel flavour comes from.”

For Mason’s business partner, Mohan Kumar, OddFellows use of pretzels is rooted in a personal, local nostalgia; one around the Brooklyn neighbourhood’s many bodegas [convenience stores] that would often be the local source for the salty treats. ‘When you think of bodegas for some reason Bed-Stuy just pops into your head,’ says Kumar. ‘Seeing an old video of Biggie Smalls free styling in front of a bodega…that’s the iconic video from my childhood.”

Pretzels in your city: