Connoisseur Gourmet Ice-Cream’s new Brooklyn Collection features the Flatbush, which pairs chocolate brownie with chocolate custard. In partnership with the collection, we speak to the chefs turning brownies into an art form. 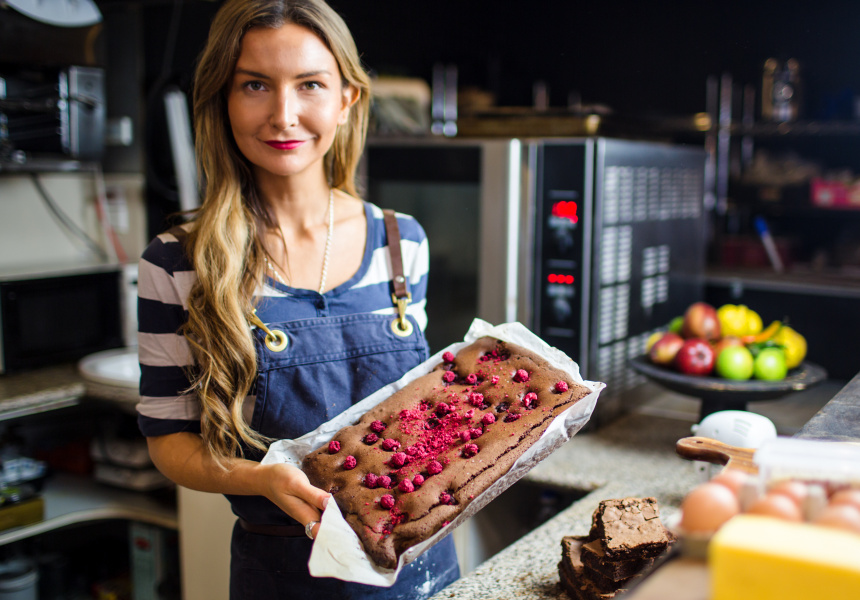 George March bakes brownies all day, every day. Her business, Box Brownies, supplies some of Melbourne’s top cafes and stores (including Archie's All Day, Sonido, Seven Seeds and Aunt Maggie’s) with 15 different flavours of gluten-free goods, including raspberry, peanut butter, espresso and bannoffee.

She says part of her fascination with making brownies is their malleability. “Depending on what you put in them, it can really influence not only the flavour but also the texture. They can really range from being quite chewy and intense, to smooth and fudgy.” March says her popular raspberry recipe, which bakes fresh raspberries through 70 per cent chocolate batter, “has the effect of making the brownies super moist. The raspberry flavour really cuts the chocolate.”

In contrast, her almond-nougat recipe gives, “more of a nutty, chewy flavour”. March considers these core ingredients key. “The most important thing about baking a brownie is starting with really great base ingredients. A brownie’s actually quite simple. You’re really going to be able to taste everything in it.”

Sydney’s Reynold Poernomo – MasterChef-annointed dessert king, and creator of Koi Dessert Bar in Chippendale – also enjoys experimenting with the texture and flavours of brownies. He says they’re a subtle but integral part of some of his famous dishes.

“I often mix them up with mousse and keep them frozen so they’re quite fudgy and chewy,” he says. “Or I just use pieces of brownie here and there to give some of my favourite desserts a different texture and richness.”

A key example is Poernomo’s Nomtella: a hazelnut-brownie dish with chocolate-cake crumb, vanilla rum, espresso and salted caramel. It’s one of the main events at a Koi Dessert Bar degustation. “I like to keep my desserts a lot lighter at the end,” he says. “So I put the heavier desserts – something quite rich and chocolatey – in the middle of the courses. That way people won’t leave on too much of a sugar high.”

Both March and Poernomo agree another secret to a successful brownie is in the baking time: getting to know your oven and having confidence in deciding when they’re done. “You want it to be really crisp and maybe slightly chewy on the outside, says March. “And then really fudgy on the inside. You want to catch it at that magic moment before it becomes a cake.”

It’s the brownie’s close relation to cake that first caught the attention of one of New York’s top pastry chefs, Sam Mason. As co-owner of OddFellows ice-creamery in Williamsburg, Mason understands his neighbourhood’s deep connection to the humble chocolate cake.

In the 1940s, a bakery called Erbinger’s in Flatbush, Brooklyn, became famous for their Blackout Cake: a complex, chocolate layer cake filled with dark fudge and chocolate cake crumbs. When tasked with representing his city through Connoisseur’s new Brooklyn range, Mason decided to honour the Blackout recipe with the Flatbush: a combination of chocolate ice-cream, chocolate brownie pieces and chocolate custard to “mimic the cake’s frosting”

His use of brownie pieces in the Flatbush is two-fold; a way to reference the borough’s unique culinary history, as well as add texture to a familiar treat. “Palate fatigue is real,” says Mason. “You don’t stop eating a huge bowl of soup because you’re full, you stop because you’re like, ‘Eh, this is boring’. That’s why tasting menus are so popular now. You can get a lot of different bites of food and stay excited all the way through the meal.”

Chocolate brownies in your city: