The influential chef’s latest is a departure from the others in his stable, with late-night dining and a dedication to cocktails – but that signature European flair and focus on the art of service remains. Here’s what else is in store. 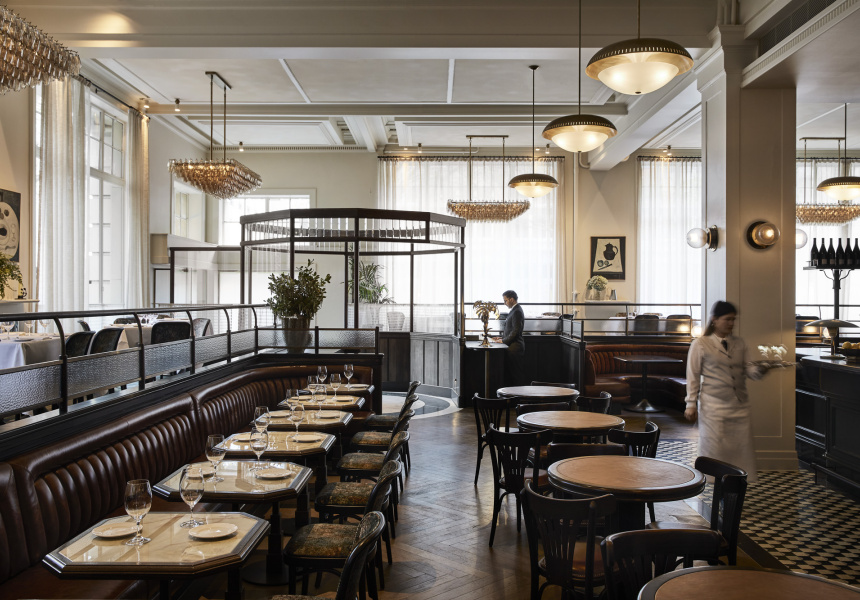 There’s no denying that restaurateur Andrew McConnell has had an indelible effect on Melbourne’s restaurant landscape.

Each of his diners have made their mark, from Cumulus Inc’s redefinition of casual fine dining to the Builders Arms’ elevated pub fare to the now-iconic New England lobster roll at Supernormal.

Next month McConnell opens Gimlet at Cavendish House. It’s named after the classic gin cocktail, but the sophisticated bar-eatery is dedicated to the art of mixed drinks as a whole.

“I think – well, I hope – the experience here will be unique and quite different to anything [diners] have ever experienced in Melbourne before,” McConnell says. And, after a pause, “Is that too bold, to say that?”

For most restaurateurs, perhaps. But from the man behind the above venues, as well as Cutler & Co, Marion and Meatsmith? We’re betting it’s not too bold a statement at all.

Here’s what we know about Gimlet that’s got us counting down the days to the mid-July opening.

It’s a bar first, restaurant second
Unlike McConnell’s other venues – mostly restaurants with strong drinks programs and maybe some bar seating – Gimlet is more of a bar with restaurant-tier food.

“I wanted to make the cocktail bar the heart and the soul of the space,” McConnell says. “I just love the energy that’s built around this bar, and what comes from that. The most fun I have is when I’ve got a cocktail in my hand and I’m with my friends at the bar.”

Expect classic cocktails (such as the bar’s namesake) and some house concoctions, plus a wine list by beverage director Leanne Altmann that champions Australian and European drops. There’ll also be a number of low-alcohol and non-alcoholic drinks too.

“I've always loved this room and this building. I came here 20 years ago when it was [a furniture store] and would just stand in the space and be in awe,” McConnell says. “It's a beautiful corner spot with a great light, and it’s just got all the elements for a great hustle.”

When McConnell and his wife Jo inspected the room early last year, they had no concrete plans for a new venue. It was largely the space – reminiscent of grand dining rooms they’d visited in Europe and America – that kicked off the idea for Gimlet.

It can be a totally new experience every time, depending on where you sit
The 384-square-metre space is divided into several distinct sections, each with its own fit, look and charm. McConnell reckons there are about eight different ways to experience the space.

“Me personally, I like to eat right at the bar,” he says of the black and gold marble bar that serves as an anchor in the centre of the room. “Set up on a stool, have a few cocktails.”

You can also sink into a velvet booth; nab one of the high tables near the bar; sit at one of the white-tablecloth tables along the outer edge (elevated on a small mezzanine so you can look over the rest of the room); or book the private dining section toward the back.

You can rock up at midnight for a late-night meal
Gimlet is open until 1am on Fridays and Saturdays, and the kitchen will be open until then, too.

Reservations until midnight are a gift to the more meticulous planners among us, but you can also walk in for a spontaneous late-night tipple and meal if the urge strikes, making it an excellent final destination where to wind down and refuel before heading home.

Soon there’ll be brunch, too.

The menu is all about indulgent comfort food, elevated
While Gimlet feels like a bar in many ways, the à la carte menu has the attention to detail and focus on provenance that are the McConnell hallmarks.

He describes the dishes – such as oysters topped with seaweed butter, and a club sandwich ($20 at lunch) – as “creature comforts that a good bar should serve”.

“A club sandwich, to me, I take very seriously. I judge hotels on the quality of their club sandwiches,” he says with a laugh.

Head chef Allan Doert Eccles’s (Cutler & Co) menu is European leaning, with a strong focus on vegetables as entrees and mains, not just as sides – for example, roast potatoes with taleggio and sage, and celery heart with mozzarella and hazelnut. Meat dishes include dry-aged duck and woodfired whole chicken with parsley and lemon.

Later, choose from the roaming cheese trolley, or get desserts such as cheesecake (also cooked in the woodfired oven) with rhubarb.

“What I like about saying that we’re a European restaurant is the simplicity and confidence. I love that it affords a lot of freedom, and I can share what I love about European cooking,” McConnell says.

Gimlet at Cavendish House is set to open at 33 Russell Street, Melbourne in mid-July after restrictions ease further. A series of bookable preview events are happening from next week. Call to book.