Sean Donovan takes the historical hotel back to its roots. For the past five years or so we’ve known it as the Town Hall Hotel. But it’s had many incarnations. Before that, it was Griff’s Wine Pub, and before that, it was known as the Purple Turtle. Originally, though, it was called McCoppin’s and it was one of Melbourne’s first gastropubs.

“It was quite a unique place in that there was always a commitment to good food and wine,” says new owner Sean Donovan, formerly of The Station Hotel in Footscray and The Wayside Inn in South Melbourne. “It was never a six o’clock-swill-style boozer.”

Donovan and his wife Natalie took over the space in July 2015. They ran it as it was for about nine weeks before closing to renovate and revamp.

“We knew within the first two weeks that we needed to make some significant changes. We went back through some old historical photographs of the place, and we’ve tried to return the pub in some way to what it was in the past,” says Donovan.

Structurally, the pub remains the same: there is still a casual front-bar area, two separate dining rooms, a wine cellar and an upstairs area. However the front bar and main dining room have been redone in shades of deep blue, with charcoal-stained wood panels, textured wallpaper and tartan light shades (a nod to McCoppin’s). The second, more casual dining room (known as “the conservatory”) has been sandblasted and filled with light and greenery to reference what was once a courtyard garden.

The wine cellar is untouched, and can still be reserved for private dining. Upstairs, on the other hand, will no longer be reserved only for functions: a large marble bar has been installed, there is a lounge area and a small public dining section, another private dining space and a small balcony for those who want to drink or dine al fresco.

“The upstairs marble bar might end up being an oyster bar, with champagne and Muscadet, and maybe some biodynamic wines,” says Donovan.

Despite all these separate spaces, it’s a “one venue, one menu” approach. Donovan trained with French-born UK chef Pierre Koffmann in the ’90s (as did his head chef, Anna Quayle, although much more recently) and so his food has a decidedly European influence. In the kitchen, a red-gum wood-fired barbecue is used to grill a variety of meat, chicken and seafood.

Hours
Daily 11am till late 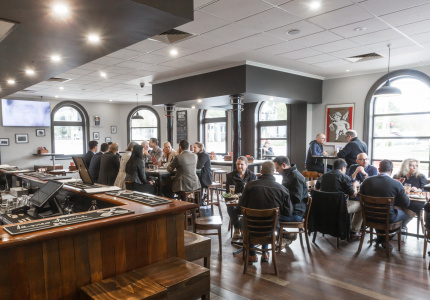