From Fitzroy to Flatbush

A handful of Melburnians have been causing waves in New York’s specialty coffee scene, and those waves are only getting bigger. 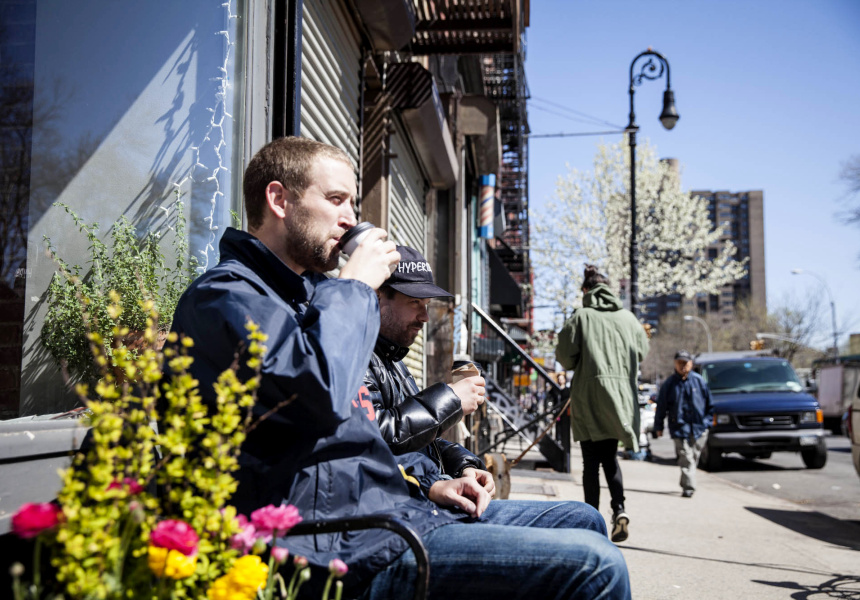 If you ever doubted the influence a small group of Australians are having on the transformative coffee scene currently sweeping New York, try ordering a flat white next time you’re there. So entrenched in the local lexicon is the humble flat white that instead of being met with bafflement, your order will receive a raised eyebrow of recognition, followed by a fine representation of the beverage we know and love.

The rise of specialty cafes and micro roasters from Manhattan to Brooklyn has been well documented. Within the city’s new coffee culture is the combination of fresh, organic food, engaging service and of course, excellent artisanal coffee. If it sounds familiar, that’s because it is. A surprising number of these new establishments have been spearheaded by Australians, inspired by the strong, and largely incomparable, coffee scene back home.

One such Aussie is Melburnian Nicholas Stone who, after a few years living and studying in New York, was bewildered not only by the lack of espresso coffee, but also the untapped opportunity. He found himself yearning for Australia’s coffee scene and built a team of professionals who could help him recreate the Melbourne experience in Manhattan.

“I developed (my cafe) Bluestone Lane with a team, because my background is not in hospitality,” Stone tells us from his base in the West Village. “I work in finance, Aaron Cook (general manager) had a coffee company in Australia and we recruited some of the best baristas and managers we could from Melbourne and New York, including Ben Rosenberg (ex Artful Dodger, Whyte Cafe), Ashleigh Puyol and Shaun Crawford (ex Little Ox, Hawk and Hunter).”

Now with two outlets in busy, high-density areas and a third to come, Bluestone Lane is the fastest business to appear on the New York Times list for Best Coffee Brand, with both existing cafes making the list within three months.

The non-traditional locations (including one in the lobby of a building) serve wholesome organic fare that’s standard on Australian cafe menus but relatively novel in NY (think smashed avocado and feta on toast). And where cafes here in Melbourne are now pushing filter coffee in earnest, in NY, it’s espresso that’s catching the imagination, and the palettes, of locals.

“When we opened in August last year, we were working off a 50/50 ratio of espresso to drip bean. That ratio is now 70/30,” Stone says. “The palettes have become more refined and the customers are more fastidious with the type of experience they want.”

The number of Australian-led coffee businesses in New York is pretty surprising. It includes Milk Bar and Bluebird in Brooklyn, Cafe Grumpy on the Lower East Side, Sydney’s ever-expanding Toby’s Estate and Manhattan’s Little Collins.

The whole social experience – the food, the music, having a bite to eat and still getting a good coffee at the end of the meal – is what motivated another Melburnian, Leon Unglik, to leave his career as a corporate lawyer to open the clearly Melbourne-centric Little Collins in midtown Manhattan.

“It’s about eating, it’s about a social gathering,” Says Unglik, who spent three years working as a barista and manager of specialty- coffee shops in New York before opening his own cafe. “Slowly it’s starting to change here, but I think a lot of people just associate coffee shops with laptops, free internet and ‘get-and- go’ coffee.”

“I’m totally aware of what’s going on with Australian coffee. In fact, if I could go anywhere in the world – and one of the things I like to do is check out the scenes in other cities – it would be Australia. Everyone is talking about Australia,” says Stumptown vice president, Matt Lounsbury.

Lounsbury says that like Portland, Australia has become the benchmark for communities that prioritise food, drink and coffee. “For years Australia has been making coffee a core part of a restaurant or cafe. It’s always been taken seriously, without it having to be in an actual coffee bar.”

“What Australians are doing, for better or worse, is showing an alternative model to what the Americans are used to,” agrees Unglik.

This includes a renewed attention to customer service. Bluestone carefully seeks out the best global talent in food, service and coffee. As it happens, most of this talent comes from Melbourne, to the point that Nick Stone continues to actively look for staff back home.

“It’s part of the DNA of Melbourne. They understand the service we are looking for and that’s a huge differentiator,” he says. “Our staff need to work with volume and speed and still maintain quality.”

With any new scene comes new adjustments, and perhaps the biggest change for the notoriously time-poor NY locals is the notion of having to wait patiently for their espresso.

“New Yorkers are used to getting their coffee quickly because it’s usually batch brewed, and they’re used to getting it in a massive volume,” says Stone. “In Australia, each coffee takes two-to-three minutes to be carefully crafted, and that’s the deal.”

As the market continues to grow and the cafe culture unfolds, the new business community remains supportive and welcoming of any new players.

The prospects, says Lounsbury, are endless. “The list is healthy and growing but there are still opportunities for everyone, including Australians. For the size of the city, you can still walk way too far to get a decent coffee.”

This ‘the more the merrier’ mentality is largely due to NY coffee drinkers being a habitual bunch who don’t like to leave their block.

“Starbucks and local delis still maintain 95 per cent of the market, so the speciality coffee houses are only fighting over five per cent,” says Stone.

Mind you, for a city of almost nine million people, that’s a lot of flat whites.