Expect French technique, a Japanese approach to balance, and inspiration from his Malaysian background in dishes such as escargot studded with streaky bacon; and choux buns topped with Kopiko 3-in-1 instant coffee mousse. Plus, lots of babka, including a cheese and garlic one. 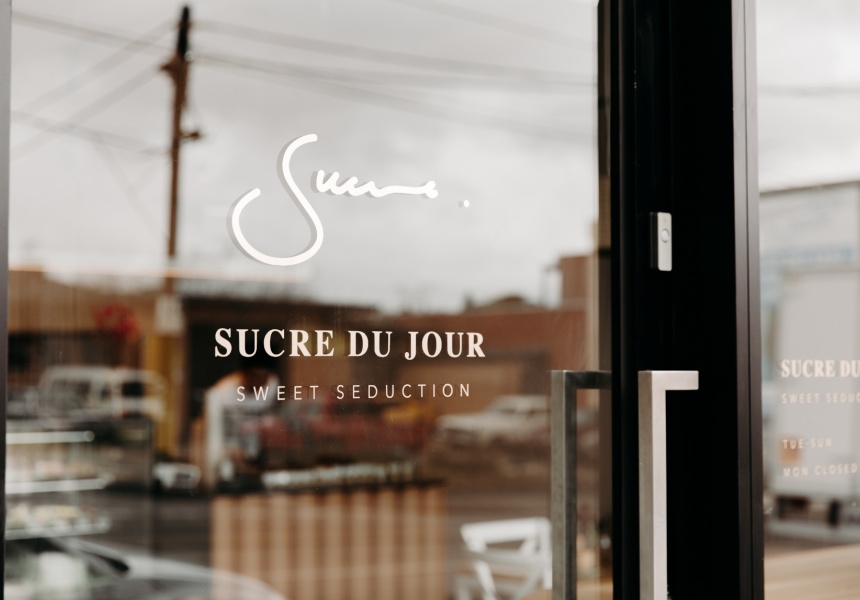 The second is co-owner Josephine Tan, who greets me from behind the espresso machine; third is Tan’s partner Eigen Ting peeking his head out from the kitchen.

And fourth is that they’re the only two working here.

“People ask us how we do it all by ourselves. But it’s manageable if you make sure your product range is smart,” says Ting, former pastry chef at L'Hotel Gitan. He also did a stint in Singapore, working under the late French chef Joel Robuchon, and at the famed Raffles Hotel.

Ting and Tan didn’t originally plan to sell babka, but like many Melburnians in lockdown, they’ve been experimenting with breadmaking at home. The Nutella babka has house-made hazelnut praline and gooey, spiced caramel swirled throughout. There’s also a matcha version filled with black sesame paste and topped with raspberry jam; and a garlicky, savoury one made from potato bread and stuffed with cheese.

Delicate, single-serve tarts are real standouts. The Rosetta has cheesecake baked into its shell and grapefruit marmalade on top, then a raspberry-rose cream piped in a thin spiral on top of that. The Mont-Blanc stays true to the classic Parisian dessert’s chestnut flavours, but with hints of blackberry and blackcurrant; and the Macadamia-Cereal Tart draws on nostalgia for cornflakes, and the flavoured milk it leaves behind.

Then there’re the Petit gateau or small cakes – maybe a chocolate-raspberry number that sandwiches mousse, ganache and jam between seven layers of cake. Or the Vanilla Infiniment, inspired by a patisserie the pair visited in Japan: there’s vanilla in the pastry, frangipane (an almond-flavoured, sweet cream), ganache, syrup, mascarpone cream and glaze. “We definitely focus on French technique and the Japanese approach to balance, but with our playfulness,” Ting says. “It’s really part of our character – we don’t have strict rules we adhere to. As long as we feel happy about what we make, we serve it.”

That playfulness comes out in Sucre’s punny dish names, too. The Tirami-Choux is a choux bun topped with crisp craquelin, filled with smoked almond praline and coffee-mascarpone cream. On top is a mousse made from Kopiko 3-in-1, an instant coffee popular in the pair’s former home of Malaysia.

There are brioche-muffin hybrids (aka “bruffins”), rum or espresso-flavoured canelés, escargot made with potato bread and studded with chunks of streaky bacon, and loaves of bread.

“Sucre du jour, it means sweet of the day,” Ting says. “The idea is that every time you come in, you’ll see something new.”

Owning their own patisserie had been in the works for years, but the couple only found the perfect spot in May. The shop – formerly gluten-free bakery Wellzones – was already fitted out with lemon-yellow tiles, black marble benchtops and brass accents.

Sucre du Jour’s own personality comes out in small touches: dried-flower bouquets, a cute koala coin tray and colourful tins of tea. The drinks menu includes coffee and hot chocolate from Toby’s Estate, Tea Drop and Prana Chai teas. Pastries are displayed enticingly by the window to pull in passers-by. (One day they’ll be encased in glass domes à la the rose from Beauty and the Beast; they’ve just been waiting for IKEA to restock).

“We have so many ideas for the shop and for our pastries,” Ting says. “The sky’s the limit with patisserie and sweets – you can do pretty much everything you want.”

In light of Melbourne’s stage-four lockdown restrictions, Sucre du Jour is currently open for takeaway only for residents living within a five-kilometre radius, and delivery within 20 kilometres.