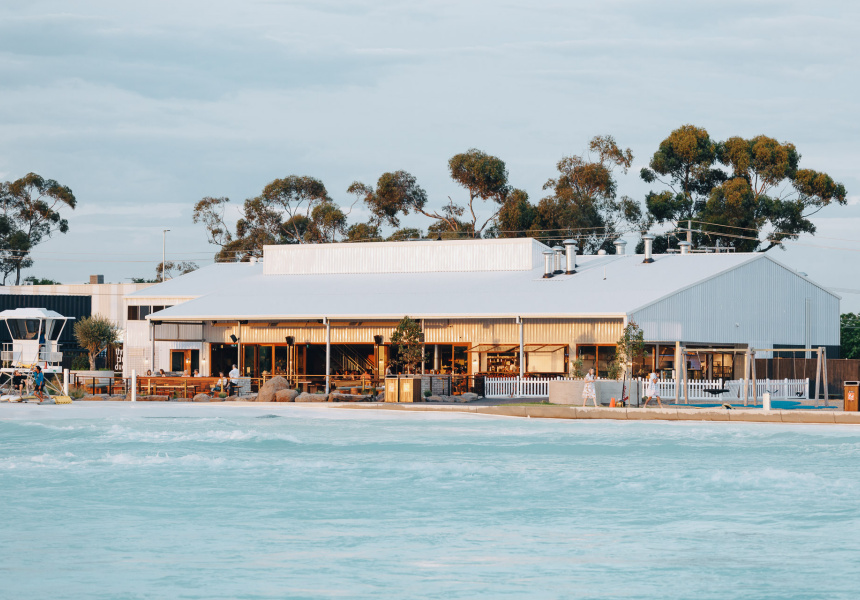 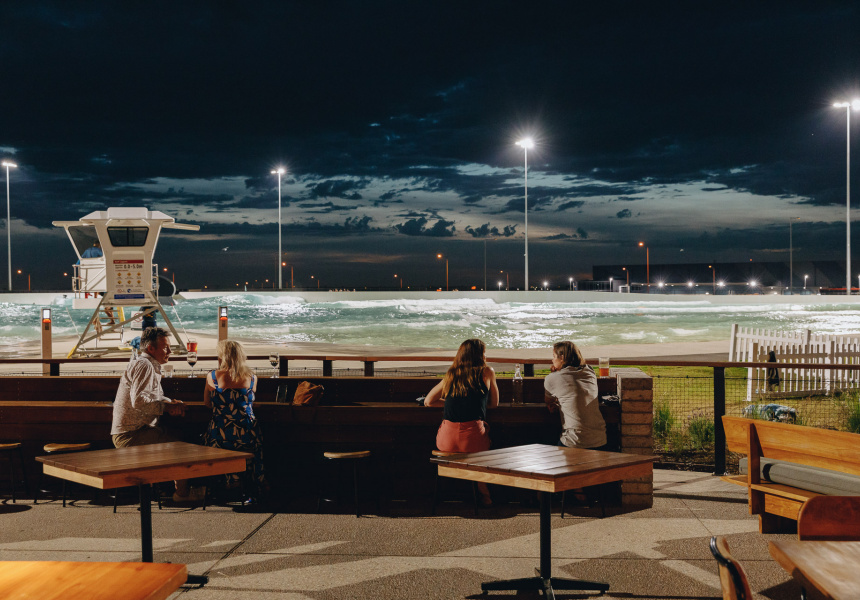 In January, Australia’s first surfable wave park, Urbnsurf, opened in Tullamarine. But like many Melbourne businesses, it’s closed and reopened twice this year in line with lockdown restrictions.

Its most recent reopening, though, included the unveiling of a new all-day diner (originally scheduled to open in March) by Sydney’s Three Blue Ducks team.

Three Blue Ducks first hatched in the Sydney suburb of Bronte in 2010, but it now has outposts in Rosebery (in Sydney’s south), Byron Bay and Brisbane. Co-owners Mark LaBrooy, Darren Robertson, Masterchef judge Andy Allen, Chris Sorrell, Sam Reid-Boquist and Jeff Benne share a love of surfing, so they figured opening a 350-seat restaurant overlooking a two-hectare, crystal-clear lagoon was a swell idea.

“You can see right down the barrels where people are getting tubed … I think that will be pretty cool,” LaBrooy told Broadsheet when the venue was announced.

Now that it’s finally open, he says, “We’re sitting outside looking at the water with a cold beer and some great food, watching people with smiles on their faces from a day of getting constant barrels.”

Breakfast options are generally light, so you can eat before a surf sesh. The spanner-crab scramble comes with a papaya-and-bean-shoot salad and house-made sriracha, and there’s avocado hummus with grilled haloumi, pomegranate and hazelnut dukkah on sourdough.

After midday, try the burrata with charred zucchini and salsa verde; tomato-and-chilli mussels with garlicky Baker Bleu sourdough; and buttermilk fried chicken with hot sauce. For a more substantial post-surf feed, go for the loaded Provenir beef burger; the Portuguese-style rotisserie chook with fermented-capsicum glaze; or a pizza (there’s a spicy salami number with pickled chilli, smoked mozzarella and basil).

“We wanted to showcase the best of Victoria’s incredible farms, wineries, craft breweries and artisan producers as the heroes of the menu,” says LaBrooy. “We’ve got a pizza oven … as well as a rotisserie and charcoal pit, so that inspired a lot of the dishes.” Plus, herbs and Australian natives (such as lemon myrtle and saltbush) are grown on-site.

Drinks-wise, there’s a tight edit of summery cocktails. If you’re after something boozy, try the Watermelon Iced Tea (with vodka, Cointreau, watermelon, strawberry and English breakfast tea); the breakfast-appropriate Badass Bloody Mary; or an Old Fashioned spiked with Single O cold brew. There are a couple of obligatory summery spritzes too (including one made with tequila).

If you’re grabbing a drink before hitting the waves or would prefer something without alcohol, there’s a Virgin Mary; the Noperol Spritz (with Lyre’s zero-alcohol aperitivo, orange, lemon and soda); Non 5; and Heaps Normal’s non-alcoholic beer. Plus, there are a bunch of fresh juices and smoothies; a range of teas; and of course coffee (by Single O).

There’s also a rotating selection of Aussie tap beers from the likes of Stomping Ground, Bodriggy and Stone & Wood, and an easy-to-navigate, Victorian-heavy wine list.

The open-plan space is warm, rustic and catches the sunset perfectly – it’s essentially a surf shack with tidy timber furnishings. There are plenty of picnic benches and outdoor tables for large groups, but a long timber bar overlooking the swell is the best place to watch surfers get pitted. There’s a fireplace indoors for the cooler months, too.

“We’ve kept it simple to let the location do the talking,” says LaBrooy. “I honestly find myself forgetting I’m not on a South Coast beach some days – everything down to the lifeguard tower is spot on.” 4me Gluten Free, a Tiny Bakery in Elsternwick, Churns Out a Colourful Array Coeliac-Friendly Cakes and Treats – Plus Bagels, Babka and Challah