After months of delays, the long-promised new spot from the man behind St Jerome’s Laneway Festival and Ponyfish Island is here. Inside you’ll find plunge pools, an infrared sauna, magnums of champagne and fried-onion burgers. 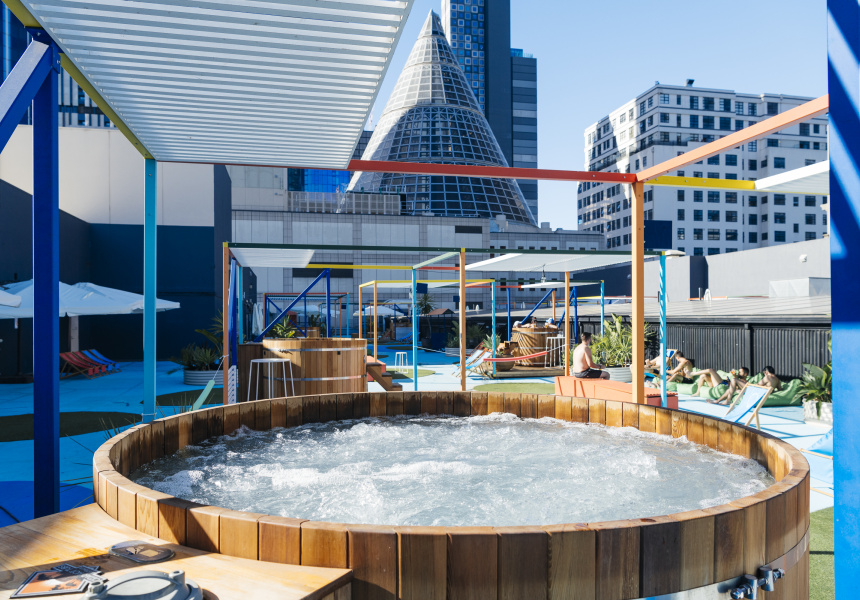 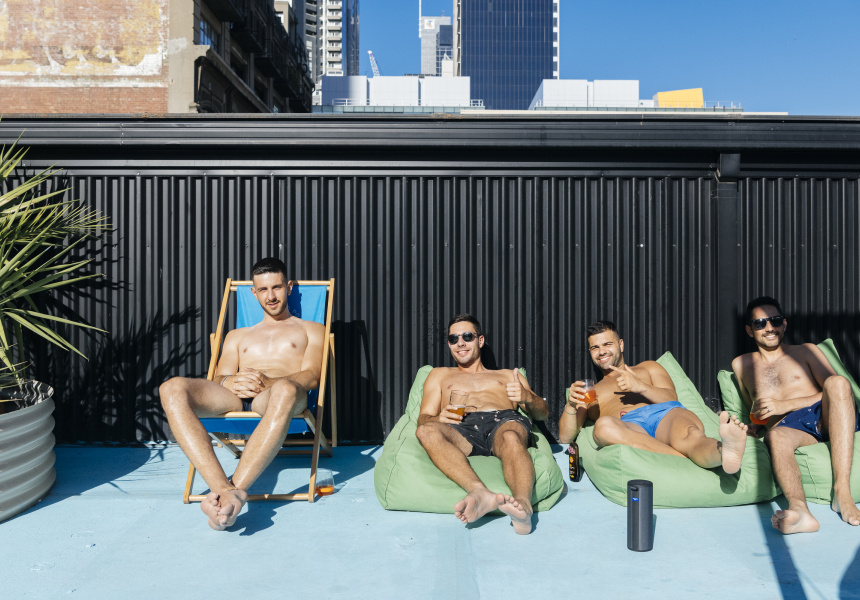 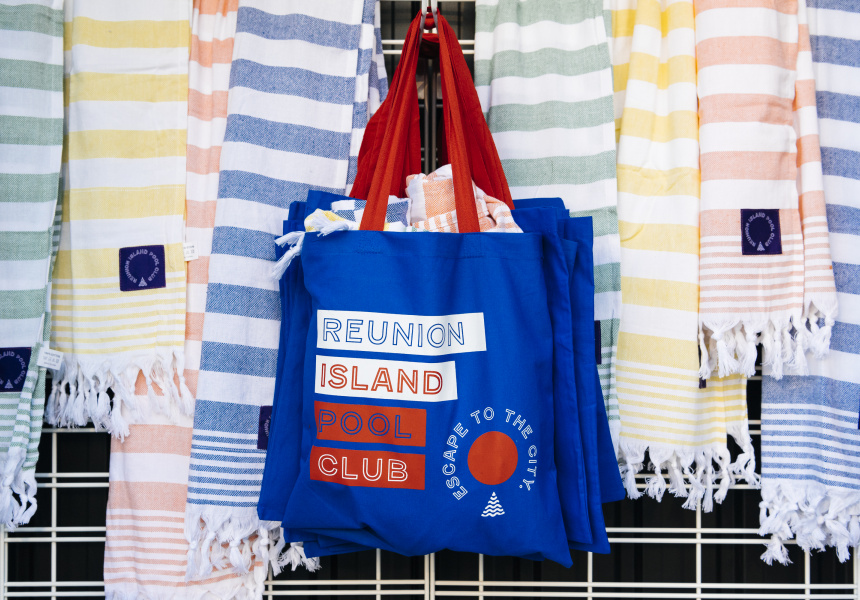 Variations on the phrase “oasis in the city” will be used by almost everyone who talks about Reunion Island Pool Club. And honestly, that’s fair. It’s pretty accurate.

To find the summertime pop-up, enter Melbourne Central and go up the escalators to the third floor. Head past the noise, the shoppers and the tourists, past the bowling alley, toward the fire exit, and – partly obscured by support beams – you’ll find large, colourful doors, a little jarring in this context.

Through those doors is that oasis: a sprawling, aqua-blue rooftop bar peppered with greenery-filled planter boxes and deck chairs, a sharp contrast to the glass and grey of the surrounding skyscrapers. Staff dressed in summery printed shirts (designed by Superdry) move between 10 plunge pools serving Kirin draught and Laurent Perrier champagne in sizes ranging from a half bottle right up to a 1.5-litre magnum for $205. There are cocktails, too, named after Australian Olympic swimmers. The Judy-Joy Davies is Herradura Plata tequila, verjuice, ginger beer and Chambord, and the Hayley Lewis is vodka, Maidenii sweet vermouth and strawberries.

A plunge pool for up to four people costs $200 for two hours and includes entry to the island (normally $10) and a bluetooth speaker. A 10-person pool costs $500. You can throw in extras from the kiosk, such as sun visors and towels, and there’s bright and playful merch, from stubby holders to tote bags, by local designer Brendan Coghlan.

To eat, Jimmy Hurlston (also known as “Jimmy’s Burgers”) is bringing his Collingwood burger spot Easey’s to the rooftop. The club sandwich is confit chicken, Challenger Smallgoods maple bacon, iceberg, tomato and mayo. Tacos include pulled pork with pork rinds, slaw, aioli and lime; and barbeque jackfruit with corn. Of course there are burgers, too. The specialty is Hurlston’s take on an Oklahoma fried-onion burger, which has an obscene amount of onions smashed right into the patty.

Co-owner Jerome Borazio (the “Jerome” behind St Jerome's Laneway Festival; St Jerome's – The Hotel, which occupied this space before; Harry and Larry’s; Ponyfish Island; and Back Alley Sally’s) says he wants the space to be accessible for everyone – it’s not just a party spot.

He’d had the idea for a while, but it wasn’t until Melbourne Central’s owners came to him looking to evolve the space beyond the glamping hotel concept that he had the chance to try it out.

“I always wondered why Melbourne didn’t really have any rooftop pool clubs,” he says. “There’s so many residents, and so many office workers that are confined to their buildings because in that direct area there’s not a lot of green space. While it’s not technically green, it’s an open space that you can just come down and just work on your laptop if you want.”

Beyond the plunge pools, there’s an infrared sauna, and plans for yoga, mindfulness and boxing classes. With all this happening on a roof that was never designed for such things, Borazio says he feels like he’s become a bit of a scientist. Reunion Island was originally due to open in October, then December – but unexpected hurdles such as water movement and weight loading delayed bringing the pool club to life. They also had an impact on the overall design.

“In hindsight, it could turn out that we ended up with a better option,” he says. “We [originally] had four major pools, now that’s been split into 10 smaller pools.”

And though the mammoth undertaking is finally here, Borazio is already thinking about cooler weather, when the pop-up comes to an end. Though he won’t be drawn on any specifics (“let me get through summer first”), he assures us there’s a plan in the works. In the meantime, have another drink, take another dip and enjoy the sunshine.