This double-decker spot is full of cosy nooks. Sink into a leather banquette or one of the gold velvet couches and order zhooshed-up hotel classics (thinly sliced beetroot-dill cured trout, pan-roasted chicken topped with truffle) from a former Cumulus Inc and Marion chef. 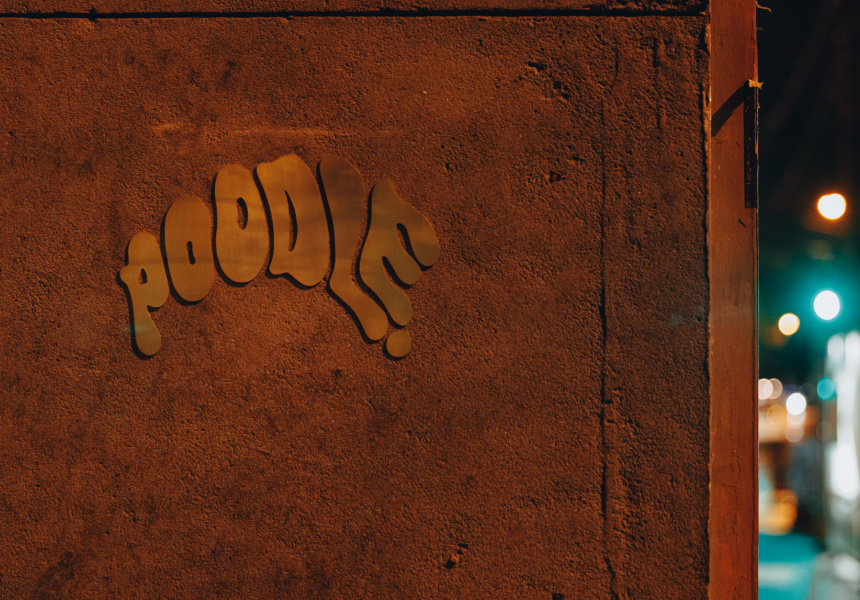 Google “famous poodles” and you’ll find an array of joyous dogs with occasionally questionable haircuts. Some are coiffed and fancy, others are fluffy and relaxed, but all are just a teensie bit silly.

“Poodles are fun,” says Zoë Rubino, who co-owns newly opened Poodle Bar & Bistro with her husband Emilio Scalzo. “We have a sausage dog and a staffie, but I just love how different poodles can be.”

It’s a fitting name for the couple’s new restaurant, which is spread over two levels inside a pair of side-by-side Victorian buildings on Fitzroy’s Gertrude Street.

“The idea of Poodle was to build a place that was fun and playful and where people could spend all day,” says Rubino. “We wanted something for everyone.”

Poodle was meant to open in March, but was delayed by Covid-19. Fry had to shelve several seasonal menus and ran an Italian sandwich pop-up, Rocco’s Bologna Discoteca, out of the kitchen in the meantime.

“It’s leaning more on the French side of things to separate ourselves from Rocco’s,” says Fry. “We still have people turning up wanting subs.”

The Poodle menu is full of zhooshed-up, old-world hotel classics, though the team is running a shorter version while customer numbers are restricted.

Snack-wise, there are Sydney Rock oysters, served natural or with acqua pazza (a tomato, chilli and smoked fish dressing), and prawn cocktails in dainty Martini glasses served with prawns delicately hanging over the edge. Plus, tins of smoked sardines, anchovies and baby octopi; house-made charcuterie; vol-au-vents (French-style pastry cases) topped with salmon roe; and celeriac and potato pave (thinly sliced and pressed into a buttery brick).

The cocktail list is short and includes a Wet Poodle (a wet Martini) and a Poodle Spritz (an aperitivo of your choice topped with prosecco and soda).

Light-rye sourdough is made in-house with excess coffee grinds and served with kefir butter and pickled baby vegetables. The cream base is also the bed for the sliced trout, which is cured for 12 hours with beetroot and dill and is served with horseradish and bottarga.

Or there’s the honeycomb tripe à la Poodle with parmesan rind, pancetta and butter beans. And the pan-roasted roast chicken comes on braised black cabbage, topped with a heap of sliced truffle.

For dessert, a chocolate bombe Alaska is set alight at the table. It’s part chocolate, part olive-oil parfait on an olive-oil sponge, all cased in meringue.

“It’s the same kitchen, same space, same everything, we’re just allowed to have people inside now,” says Fry. “And we’re plating things on plates instead of cardboard, which is great. And it’s nice to have a buzz of a semi-full restaurant.”

The fit-out is by design studio Bergman & Co and blends European elements with a touch of kitsch Aussie-Italian suburban. (An elaborate Franco Cozzo sideboard would not feel too out of place).

Brick walls were knocked out between the two buildings, creating two distinct spaces. Downstairs, one side is dominated by a marble-topped bar, and grand wooden archways lead into a dining room with glass dividers creating privacy between tables.

Out the back is a terracotta-tiled courtyard, and a walk-in cellar.

The dark-green, teal and pink palette continues into a second bar upstairs, and there are chequered floors, hanging wooden fans, and slatted wooden ceilings throughout. Leather banquettes and gold velvet couches encourage settling in for the long haul.

“Everyone has a cosy little nook,” says Bergman & Co director Wendy Bergman. “We didn’t want anyone to feel like they were sitting in the middle of the room, or in a seat that felt second rate.”