Swing by this new neighbourhood eatery for a menu of just eight dishes that draws on the vegetarian equivalent of nose-to-tail dining. There’s Small Batch coffee and inventive sandwiches on Wild Life Bakery bread – including a brisket version for carnivores. 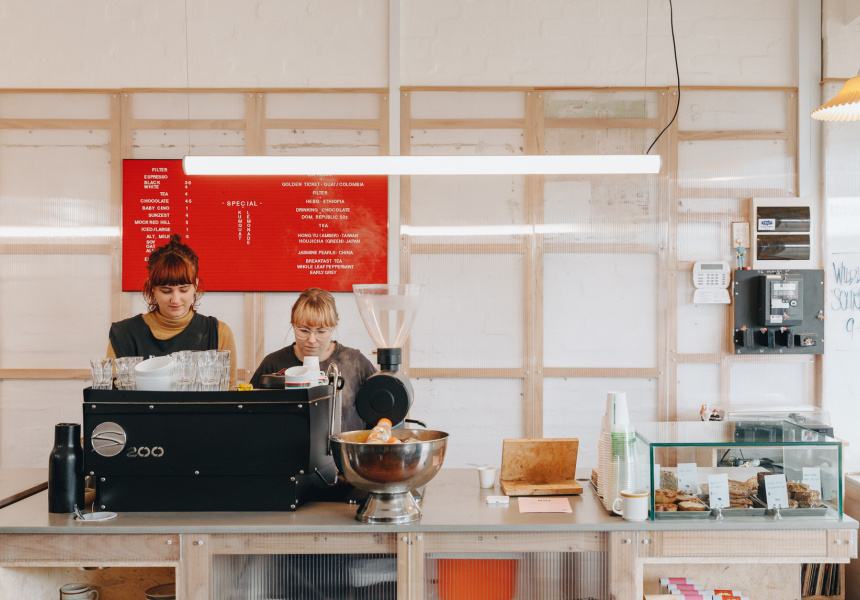 Rat is an acronym for “root and tip”; the creative parameters that owner and chef Callum MacBain set for himself when he opened Rat the Cafe, a neighbourhood coffee shop and eatery in Thornbury.

Consider it the vegetarian equivalent of nose-to-tail, a closed-loop operation where the whole vegetable is used and ingredient provenance is as important as the final result. MacBain is a self-taught cook whose skills lie in cooking rustic food, so the menu is small but thoughtful.

“The emphasis is on communicating the value of ingredients,” he says. “Even if they’re not necessarily [considered] ‘special’ or ‘luxury’.”

MacBain works with businesses that favour minimal-intervention processes. Produce from Days Walk Farm in Keilor makes up the bulk of a resourceful menu that changes daily based on leftover ingredients.

On a plate found in an op-shop, poached Real Eggs from Daylesford come served with creamed beetroot tops, zesty radicchio and a crunchy pumpkin seed pangrattato. The beetroot leaves are used in salads while the taproot (the main, red part of the beetroot plant) is pickled for garnishes, roasted for other dishes and even used in brownies.

Porridge is made from pearled spelt, barley and rolled oats and served with baked quince, toasted hazelnuts and brown butter.

Organic biodynamic flour from Demeter is used to bake fresh scones, which are available in the mornings (if you’re quick). Jams and cultured butters are also made in-house, and Meatsmith streaky bacon is available as an add-on.

MacBain says his mantra is to discover rather than invent, an approach he picked up at acting school. The fit-out of the former dietitian’s practice was created in collaboration with designer Elissa Doonan and makes use of what was already available in the space.

“As with the menu, the intention was to stay out of the way as much as possible and let the raw materials do the talking,” MacBain says.

Exposed plaster peeks through sections of the white walls, while an old brick wall pokes out haphazardly from one side. The polycarbonate roof sheeting on one wall behind the coffee counter doubles as decoration and a specials board. Bench seating and tables were built by MacBain from recycled plywood, while school-like chairs give the cafe a slight institutional air, but it still feels quaint and homey thanks to colourful recycled plastic pot plants from DesignbyThem, a record player spinning vinyl, and the German plastic police and firemen figurines used as table numbers. A blank canvas found in the building was painted by MacBain’s mother and now hangs in the hallway. It depicts a rat dining at a family table.

Filter and espresso coffee is by Small Batch and other progressive roasters (Wood and Co, Floozy, Market Lane are some recent examples), alongside Assembly and Kuura tea. Hot chocolate is from Hunted and Gathered, and there’s also homemade kumquat lemonade and freshly squeezed juices. 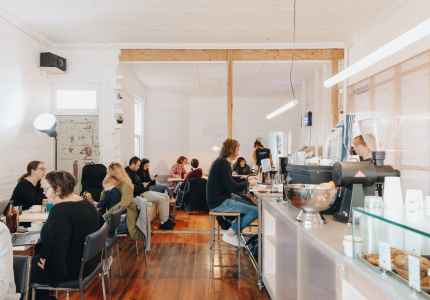