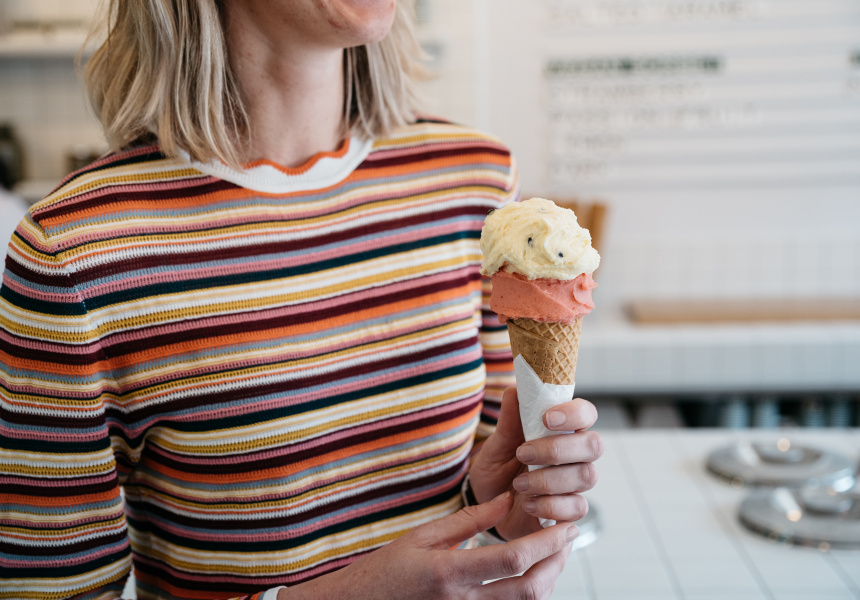 It’s easy to imagine that Piccolina owner Sandra Foti was popular at school. Her father learnt how to make 100 per cent natural gelato in the south of Italy and was always churning gelato at home.

“Dad would make batches of gelato and I’d give it to my friends in little takeaway containers,” Foti says. “They’d be like, ‘Why can’t we find this anywhere?’ and my dad would be like, ‘Because no-one is crazy enough to sit there, roasting nuts and making nut butters.’”

Much later, and after 20 years spent working in the design industry, Foti opened the first Piccolina in Hawthorn in 2016, followed by a second in Collingwood last year. The third store opened in October on Acland Street, St Kilda just in time for summer. Piccolina means “tiny” in Italian, and it’s true of this new shop. It’s less than half the size of Collingwood, though the gelato menu is the same.

“We were really careful about making sure that quality was consistent,” Foti says. “Even though [production is] increasing, the quality stays exactly the same.”

While most of velvety, all-natural gelato will be produced in Collingwood, some will be churned daily at St Kilda.

Foti says the gelateria’s signature is pistachio, but it’s worth checking out the stracciatella variety, made with fior di latte cheese. More traditional: chocolate, hazelnut, honeycomb, salted caramel, mint, white chocolate or coconut. Better Than Nut-ella is made with Piccolina’s own take on the chocolatey hazelnut spread, topped with the housemade “Nutella” on tap.

Four special gelatos will rotate weekly. This weekend there’s buffalo ricotta and lemon curd; peanut-butter stracciatella; raspberry sorbet; and bread, butter and jam. Foti stresses that everything, including the bread inside the latter, is made in-house.

“It’s a commitment, because it’d be really easy just to go down the street and buy a loaf of bread,” she says. “It’s part of what we do.”

A watermelon, lime and mint granita made its debut when the store first opened, and there are frappes and vegan sorbets – including the spectacular vegan chocolate.

On the shelves, there’s a collection of homemade jams, nut butters and cakes. Piccolina’s take on a Ferrero Rocher is made with hazelnut gelato, milk-chocolate gelato, Better Than Nut-ella gelato, hazelnut praline and puffed rice. It’s covered in dark chocolate and crushed roasted hazelnuts, finished with a touch of gold leaf.

The glossy interior of the store is by Hecker Guthrie, in-line with Piccolina Collingwood and Hawthorn, but it’s more intimate than the others – Foti wants it to fit in with the tiny Italian cake shops nearby.

“We wanted to have that interaction between the street and the store,” Foti says. “The whole facade opens up, so being inside the store feels really open.”

Terrazzo walls welcome natural light that enters through large windows at the front of the shop. And there’s a stand-up bar – a tiny, but very Italian, way to enjoy gelato. A green-heavy colourway references the Italian flag, as do red, white and green highlights and packaging (the latter designed by Projects of Imagination).

Watch chefs prepare batches of soft, creamy gelato while you choose flavours from the Scrabble-esque board above the servery bench, which is clad in vanilla-coloured, square-cut Italian tiles.

“It’s got a really 1960s southern Italian look and feel to it and that’s what our gelato is about,” she says. “It’s about bringing it back to what it was [traditionally] – just really honest materials, raw materials.”

This article was updated on December 12, 2018. It first appeared on Broadsheet on October 12, 2018. Menu items may have changed since publication.