Oysters are served at least eight ways, the “Not Oysters” menu is a knockout, and your Martini comes with a spherified olive in a tiny oyster shell. 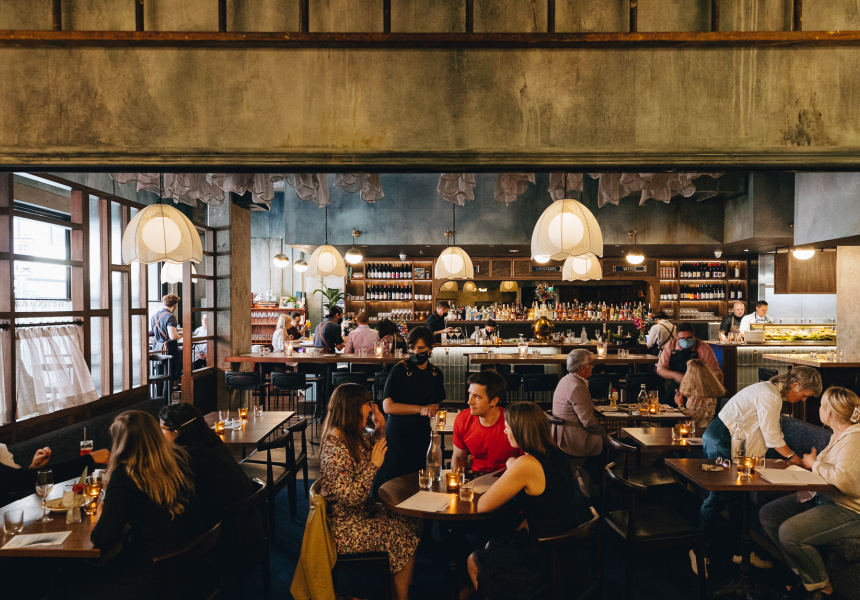 Alex Boon and Pez Collier have an 82-page document detailing every element of Pearl Diver Cocktails & Oysters (PDCO), which has opened in the former Annam space.

The venue is the result of Speakeasy Group’s Pathway to Partnership Program, which saw directors Greg Sanderson and Sven Almenning mentor the duo for a year en route to opening PDCO. (Speakeasy is behind Eau de Vie, Mjolner, Boilermaker House and Nick & Nora’s.)

“It was like Shark Tank, to be honest,” Collier says of the process. “All eight candidates presented their business proposals. From there we had some open discussion between the partners, and the winner was announced from that almost a year ago.”

Speakeasy contributed $250,000 towards bringing Boon and Collier’s PDCO vision to life – a whopping 90 per cent of the cost – for a 50/50 partnership. With Covid delays, it’s been two years in the making.

“We broke down the entire idea – all the way down to knives and forks and coasters,” says Boon. “That’s really helped us with the building and design because it’s all been on paper from the start.”

It was a six-month reno process, and interior designer Studio Y has balanced hard, concrete finishes with flowing drapery and plush charcoal banquettes. Scanlan & Makers looked to the inside of oyster shells when developing the colour palette, which gives the walls a calming, oceanic feel. They’re decorated with paintings of ships at sea, as well as four steamship menus from the early 1900s. A private dining room (for up to 16 people) will see 1.2-metre-long oyster displays served at an elongated table with two in-built ice wells.

As head of mixology for the Speakeasy Group (and Australian champion at Diageo’s 2019 World Class Competition) Boon is in charge of cocktails. And he’s created a version of the venue’s namesake cocktail – the tiki-inspired Pearl Diver – as the signature drink. It features Bacardi Carta Oro rum, Tasmanian honey, butter, spices, pink grapefruit and other citruses, poured into a Pearl Diver-style glass with a narrow, ribbed bottom.

“We’ve really tried to modernise tropical cocktails and elevate them slightly,” Collier says. “We might look at something with a tarnished name, like The Hurricane, and break it down into its core components and rebuild it using the best ingredients.”

The team has also reimagined some classic cocktails in partnership with local makers. The Martini was developed in collaboration with Mordialloc distillery Saint Felix, using a gin made from a base of oyster shells and wakame. It’s served with Maidenii vermouth and white kunzea flowers, plus a spherified liquid olive – created with Sicilian and queen olives, lemon thyme and garlic – served on a tiny rock-oyster shell.

Collier’s philosophy for the wine offering is to keep things “fun and delicious”. The 50-strong list is split between local, French and Italian bottles – ranging from funky pét-nats to beaujolais.

As for those oysters, there are two rocks and two Pacifics available au naturel. There are three dressings to choose from (apple, anise and cucumber; creme fraiche and caviar; or lemon granita and lemon balm), and three cooked options (a take on Kilpatrick; Rockefeller with warrigal greens; or deep fried with sauce gribiche).

The “Not Oysters” menu is also a snacker’s dream. Expect salted-cod beignets with sorrel cream; duck terrine with a strip of foie gras; coal-grilled octopus with harissa; a coil of Toulouse sausage; and waffle fries snowed under with grated Comte.

“It’s more about having snacks across the course of drinking,” says Collier, “rather than a three-course, sit-down kind of vibe.”