Above American barbeque spot Cheek, Peaches has four happy hours a day and serves Sichuan fried-chicken sandwiches until 3am. Further up, a rooftop bar with city views. 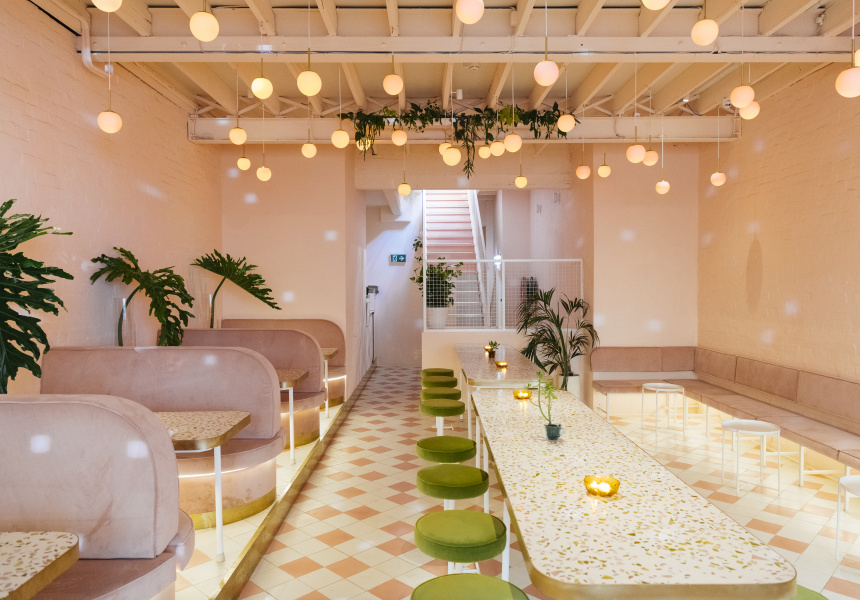 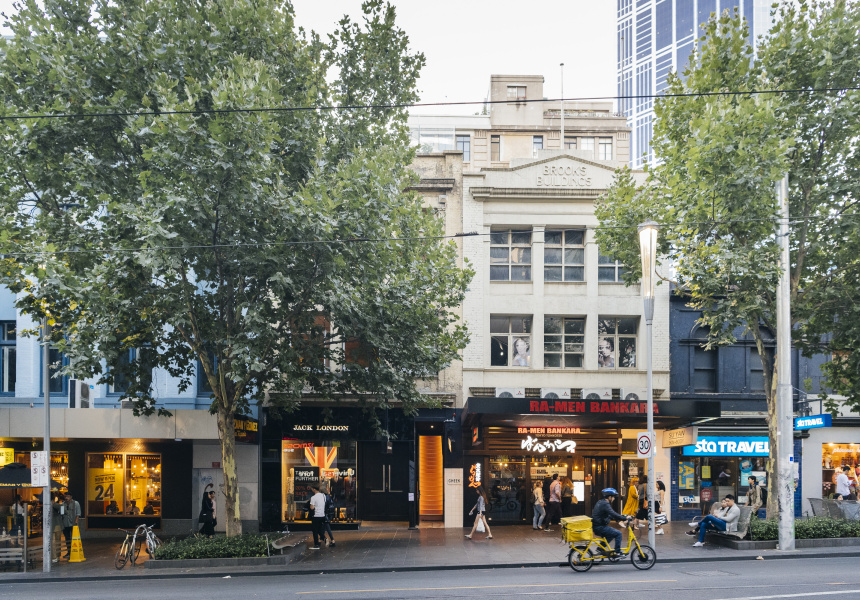 Think about every good cocktail bar you’ve been to. Now think of some keywords to describe that group. Leather, moody lighting, taxidermy, serious, secretive, that sort of direction?

Now put all that aside and meet Peaches, the gorgeous new cocktail bar directly above Swanston Street’s American barbeque restaurant Cheek. Peaches is fun, flirty and ready to dominate your Insta feed – even more so than the gradated, pink-to-white staircase that leads up to it.

“Cocktails can be serious and fun at the same time,” says Sam Peasnell, who owns Cheek, Dexter and Takeaway Pizza with his brother Tom and their mate Adam Goldblatt. “We wanted something bright and slightly different.”

Of course, these supermodel looks would mean jack without a decent drinks list. The experienced bar team has it under control, with plans to bring everything from tonic water to falernum in-house. At the light, fruity end of the menu, the Get Physical packs black tea, peach, vermouth and citrus. And at the brutish, am-I-drinking-from-an-ashtray end, the Lucky Strike combines Laphroaig, bitters and herb-infused vermouth.

The Laphroaig thing probably won’t be your go-to at midday, which is when Peaches opens. But as 3am approaches it could be a winner – especially with a couple of the Sichuan-inspired fried-chicken sandwiches available until close. Normally the sambos are $10, but between 12pm and 2pm and 12am and 2am, they’re $7, and so are picklebacks (whisky with a chaser of electrolyte-rich pickle juice).

Head up to the rooftop for a change of pace. The Hamptons meets Miami is the easiest way to describe it: white furniture, cooling water misters and a separate drinks menu led by creative interpretations of the spritz. Unofficial dress code: shorts, open-necked shirts and breezy linen dresses.

“Everywhere you go there are riffs on the spritz, but they’re all just aperitifs with prosecco done exactly the same way,” Sam says. The alternatives here include blood orange and pét-nat; pickled pear juice, mead and soda; and spiced rum, cassis and lemonade.

It’s all very summery, but the team already has the jump on winter trade. A retractable awning is on the way and the rooftop’s concrete benches already have built-in heaters ready to make bums toasty.

This article first appeared on Broadsheet on January 22, 2019. Menu items may have changed since publication.