This revamped three-level spot, from the guys behind Dexter and Takeaway Pizza, bears little resemblance to its former self. Go for focaccia-like pizza with house-made mortadella and garlic-fermented honey, chevre-stuffed potato skins, plenty of Aussie spirits and a pool table. 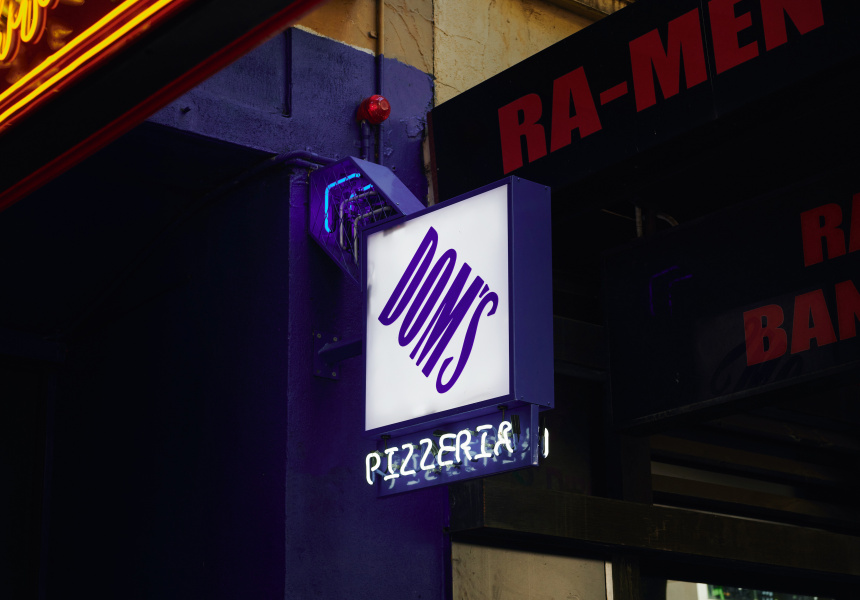 CBD rooftop bar Peaches was open for just over a year before Covid hit, but Melburnians took a shine to its blush-toned walls, terrazzo tables and grass-green bar stools – all illuminated by a spinning disco ball. Downstairs sibling Cheek was just as stellar, with envelope-pushing American-style barbeque and meats dry-aged in-house.

But for owners Sam Peasnell, his brother Tom and mate Adam Goldblatt – who also run Preston’s Dexter and Takeaway Pizza – something was missing.

“We sat down and were struggling to find the energy to come back [after lockdown],” Sam tells Broadsheet. “If we were going to come back, we wanted to make sure that we like what we’re doing and we’re enjoying our work.”

The guys spent lockdown dismantling everything that was once there, stripping back the two main floors and starting from scratch.

The result is Dom’s, a casual new concept spanning all three levels, which Sam reckons is “a bit like an RSL”. Ascend hand-stained timber stairs to the first floor, where you’ll find woodfired pizzas topped with house-made charcuterie (see it all hanging in the dry-ageing fridge) and bistro-style leather booths to keep things cosy.

“Adam always thought we should’ve done pizzas here,” Sam says. The team uses a sourdough base that’s fermented for 72 hours then dimpled like focaccia. Red sauce pools into the craters, making for a pizza that’s best eaten fresh out of the oven.

One of the specialties is a simple pizza marinara with tomato sugo, confit garlic and extra-virgin olive oil. Another is topped with fefferoni peppers, pecorino and hot salami.

Just as at Cheek, Tom is the meat man, and this time he’s focusing on smallgoods and deli meats. His whole-pig salami is made with Yarra Valley Berkshire pork, and he also makes the mortadella for a pizza topped with garlic-fermented honey.

Meanwhile, Sam looks after drinks – writing the wine lists, crafting cocktails (he’s currently working on one inspired by an evening at Gimlet at Cavendish House) and trying to get punters to drink more lambrusco, a lightly sparkling red wine from Italy.

“We’ve got a legitimate sense of excitement in what we’re doing now, so hopefully that translates into it being the best product we’ve ever done,” he says. “There were so many reasons not to change, but in the end we just wanted to do what we wanted to do.”

Upstairs there’s a more casual vibe, with royal-blue carpet surrounding a wood-panelled bar and a pool table around back. It’s just snacks here – no pizzas. But between the potato skins with chevre and anchovy, tempura-battered pumpkin with curry-leaf aioli, and salted cod roe with fried nori, there’s more than enough to go around.

Wines and aperitifs are the focus across all three levels, but the cocktails also hold their own. Find riffs on the classics, plus new mixes utilising amaros, sherries and vermouths. And there are plenty of Australian spirits in the cabinet, from Poor Toms gin and Delinquente Wine Co’s Bizzarro Aperitivo to Brookie’s macadamia-and-wattleseed frangelico.

And while the first two floors have undergone massive transformations, not much has changed on the rooftop – apart from a few more accents in that same cobalt shade.

“We’ve ended up with a space that’s far more focused on the kind of experience we want you to have, rather than any sort of hero design features – nothing that’s designed to be photographed,” Peasnell says. “Our two main products are wine and pizza; we don’t want people talking about the fit-out so much, we’d rather it be about the good time they had.”

This article first appeared on Broadsheet on January 27, 2021. Menu items may have changed since publication.