Good Gnocchi’s a carb-y beacon of hope on Langridge Street. You’ll get good gnocchi, garlic bread and a smile. No more, no less. 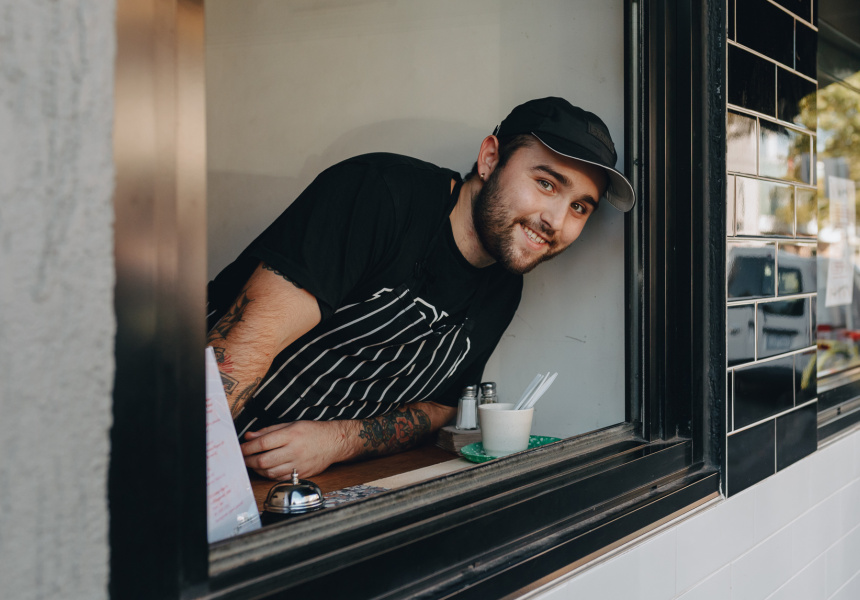 Compared to nearby Smith Street, lunch options are slim in Collingwood’s industrial rabbit warren between Wellington and Hoddle streets. Many have perished using their last stores of energy to reach what they think is a sandwich bar, only for the shimmering mirage to morph into a grease-covered mechanic confused by your request for a latte.

But there’s a carb-y beacon of hope on Langridge Street. Careful, though – blink and you’ll miss it. There’s no sign, just some blacked-out glass with tiny A5 menus taped to it and a solitary open window. Gnocch’-gnocch’ on that pane of glass and you’ll meet James Eddy – the 22-year-old tattooed potato-dumpling cherub who less than a month ago opened Good Gnocchi, his one-man operation selling foil takeaway containers of gnocchi and garlic bread out of the aforementioned window.

Right now he’s gnocching it out of the park – Eddy already goes through 60 to 70 kilograms of raw gnocchi a week – but his new business (in the same building as his dad Gavin’s now defunct cafe, Eddy's Cafe) came out of sad circumstances.

“It was pretty great at the start. Me, my dad and my brother were in here together,” says Eddy of Eddy's Cafe. “My brother was on the machine and my dad was teaching me to cook in the kitchen.”

But a downturn in business forced the cafe to close and, with eight months left on the lease, Gavin gave Eddy the opportunity to do his own thing and Good Gnocchi was born.

“I just picked something random. I’m not even Italian,” says Eddy, who didn’t like tomatoes or onions growing up. “Other than pizza, gnocchi’s my other favourite comfort food … they’re just light, fluffy pillows of joy.” Much like Eddy’s cheeks as he beams at you through the service window.

If you want to dine in, this place is gnocch’ for you. It’s delivery services and takeaway only – the bar stools inside remain turned up on the tables – and Eddy’s set-up is minimal. He uses two induction hotplates to boil water for the gnocchi, and fires up two portable camp stoves to dress the dumplings in four simple sauces and parmesan cheese (optional but recommended). There’s a vegan pesto with basil, walnuts, lemon, olive oil and garlic; butter and crispy sage; a simple four-hour-cooked tomato sauce; and a classic Aussie bolognaise, which when I arrive Eddy’s thinking of beefing up with a pile of pancetta. He’s keen to branch out with gorgonzola-stuffed gnocchi too.

Eddy gets his rolls for the garlic bread from N Lee and fresh gnocchi is delivered from Pasta Classica, both on Smith Street. He plans to eventually hire a commercial kitchen and a couple of staff members to make it in-house. But when you’re the owner, cook, waiter and cashier – time is precious. Especially when there’s a lunch rush.

“There’s lots of businesses around here. All the fashion wholesalers. Lots of people from Jetstar come in. When they come in with five or six groups of people … I’m just in here by myself, shitting myself,” says Eddy.

“I don’t know how to handle that many people … so I might need to hire someone.”