Expect the same familiar service and a host of menu faves, from Lebanese pizzas, haloumi chips and falafel to Turkish coffee. Plus, a grocery section full of homemade dips, baklava, herbs and spices. 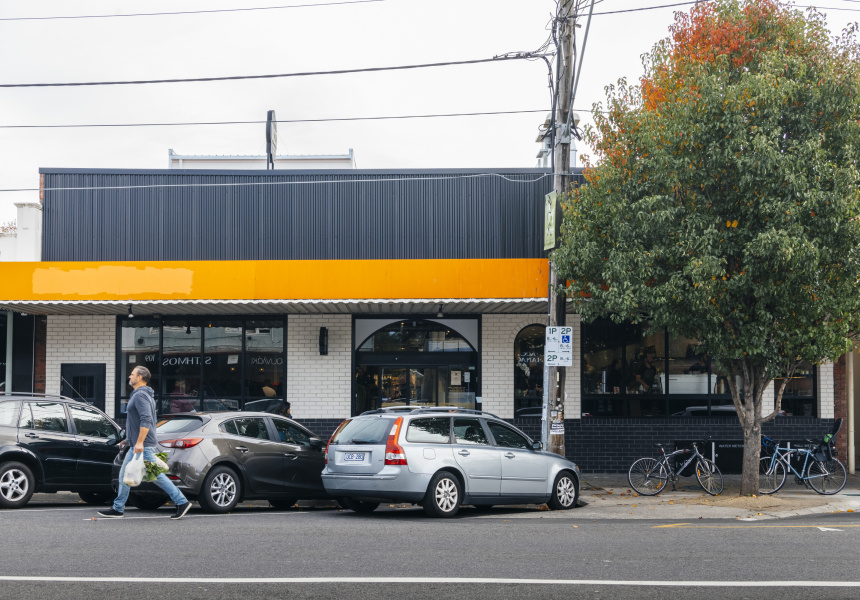 Loyal customers have been visiting Oasis Murrumbeena for a Middle Eastern culinary experience for more than 20 years. Now, the family-owned and run eatery and food store has a sibling in Fairfield.

Pass through a wide black and white tiled entrance to a welcoming high-ceilinged space. Inside, it’s bustling. Designed by Melbourne studio Sync, the Fairfield store is a more modern and airy, albeit smaller, version of the original.

“I opened at Fairfield because I’ve got a passion for the food, and really the people and the community,” says owner and chef Marwa Makool. “It’s about giving people more options and quality food, even in the supermarket.”

A balanced white, navy and sky-blue colour palette flows throughout the two levels of the Fairfield store. You’re greeted downstairs with a large tiled counter where you order food and coffee, and there’s a casual seating area opposite. Upstairs, more seating and a private event space with a modern home-style kitchen for Marwa to host her cooking demonstrations. Green foliage borders both dining areas, and there’s a lively, familial atmosphere in the space.

Created in collaboration with executive chef Craig Penglase (former kitchen manager at now-closed Circa, the Prince, and Docasa cafe in Ivanhoe), Makool’s menu brings in some of the best-loved dishes from Murrumbeena plus a few new elements. The key difference at Fairfield: wine and table service.

“That’s why I’m here, to keep the flavour in both shops the same,” she says. “The same salads, the same everything.”

Middle Eastern breakfasts include avocado on za’atar bread with beetroot tahini and feta, and orange blossom hotcakes topped with honey labneh and rose-petal katifi. More hearty are the shawarma and falafel plates, and the salmon burger with a turmeric and dill brioche bun.

You’ll find Oasis’s popular Lebanese pizzas here too. Choose from chicken and spinach, lamb and feta, or a vegetarian version with extra za’atar. Halloumi chips are fried in rice bran oil to achieve a crisp, pastry-like finish, then drizzled with a za’atar, garlic and yoghurt sauce; pomegranate molasses; and fresh mint.

In the grocery section, peruse aisles of prosciutto and ham, falafel, antipasti, cheese, ready-made soups and tagines. There’s also a rotating selection of salads, freshly baked sourdough and Middle Eastern flatbreads, and dips such as beetroot hummus and labneh, all made at the sister store. The grocer also stocks sweet pastries, beans, pulses, dried fruits, spices and other specialty products.

Makool says the shelves have been stocked according to her customers’ requests over the years. “Whatever the customers ask, if I can do it, why not?” she says. “Their lives are very busy and people want something quick … I’m thinking of anyone working and how they feel. I just want to make it easier for them.”

Marwa Makool and her children Michael, Natalie and George, who help run the business, are catering to those who live by the name of Marwa’s latest cookbook, Yalla Yalla!, which Makool says translates roughly to, “Hurry, I’ve got no time!”.

Booze is available from 7am most days, and 10am on Sundays. Local wines are from Soumah Wines or Tarrawarra Estate, or try a Lebanese cabernet sauvignon from the southern Beqaa Valley. A few simple cocktails – spritzes, Negronis, mimosas – are available, plus a few local brews and an Almaza beer from Lebanon. There’s house-made lemonade, too, and stove-brewed Turkish coffee.

This article first appeared on Broadsheet on May 29, 2019. Menu items may have changed since publication.