Acclaimed chef Frank Camorra goes back to the beach. 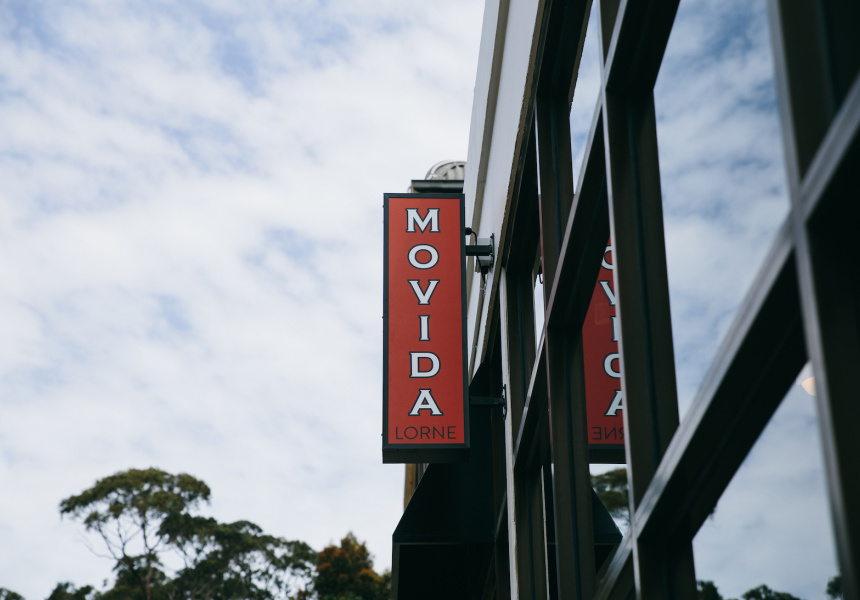 Acclaimed chef Frank Camorra is preparing radishes for pickling when he answers Broadsheet’s call. But rather than being bunkered down in Hosier Lane, where he opened iconic Melbourne Spanish restaurant MoVida 15 years ago, Camorra has a new view overlooking Louttit Bay from his open kitchen at the just opened MoVida Lorne.

“From the kitchen we’ve got a view right over the beach and beautiful greenery over the Otways. It’s pretty nice I’ve got to say,” he says.

Housed on the ground floor of the Lorne Hotel – which dates back to 1876 – MoVida Lorne is the newest addition to Camorra’s fleet of restaurants that includes MoVida Next Door, MoVida Aqui, Paco’s Tacos, Bar Tini, MoVida @ the Airport and MoVida Bali.

“Every one of the restaurants has a different aesthetic I think. This one’s about the views and not taking away from them … it’s classic MoVida but more beach-centric,” says Camorra.

Some design themes have followed through from his past restaurants. Terracotta light-shades echo the terracotta roof tiles seen at other MoVida’s, and Middle Eastern motifs featured on a glass partition are familiar. As you walk in through the front doors you’ll find a bar, and behind that a wine shop and a provedore.

“We’re selling everything from lasagne to roast pork. Eventually the idea is that you’ll be able to get a hamper you can take down to the beach … or pre-order a paella, take it home to your house and then bring the pan back,” Camorra says.

There will also be a seafood display where you can buy the day’s catch, provided by the Apollo Bay Fishermen’s Co-op, including the area’s specialities, flake and crayfish.

“The [dining room] used to be the old TAB. So the TAB had the best view in the town really,” Camorra says, laughing.

In front of the open kitchen runs a long bar where Camorra will serve up the previously mentioned pickled radishes, boquerones (an appetiser made with fresh anchovies) and other traditional Spanish snacks.

Diners will then move onto a menu that includes Apollo Bay gummy shark cooked in adobo spices such as oregano, cumin, paprika and garlic. The fish is first soaked in vinegar, spices, onion and garlic, before being dusted in semolina and fried.

“There’s a style of restaurant in Spain called a chiringuito. They’re right on the beach and you can have a swim and go into the restaurant and eat local seafood and paella,” says Camorra. “There’s an element of that we want to introduce here.”

A range of paella’s will come from traditional wide-bottomed pans that enable maximum rice crisping. A seafood paella will use the best of the day’s catch and there will also be a duck version of the classic dish. Rice, slow-cooked duck legs, chickpea stock and botifarra (a Catalan pork sausage) are cooked first on the stovetop and then roasted in the oven.

“Botifarra is actually what I was going to call MoVida,” says Camorra; a friend advised against it.

A special on opening night was the traditional Valencian dish fideuà. Octopus, calamari, mussels and snapper are braised with fideo pasta (short two-centimetre-long strands of pasta, about the width of spaghetti) which then sticks up and crisps under the heat of a salamander grill.

This isn’t the first time Camorra’s been in a Lorne kitchen. He grew up in Geelong and apprenticed at once popular but now-closed eatery The Arab during the early ’90s.

“I love being back in Lorne. The people have been friendly and looking forward to the restaurant opening. It’s important to have that connection with the locals and it’s good to be able to say I lived here for two years and meet people you remember from back then,” he says.

“[We’ve] got a house we’ve rented in the back blocks of Lorne. This morning we woke up and there were kangaroos in the front yard and rosellas. It’s quite a beautiful place.”

This article first appeared on Broadsheet on December 21, 2018. Menu items may have changed since publication.