Choose Your Weapon at Mjølner Melbourne

A retro-futurist Viking dining hall, filled with handmade axes and whole-beast cooking, blows into the CBD. 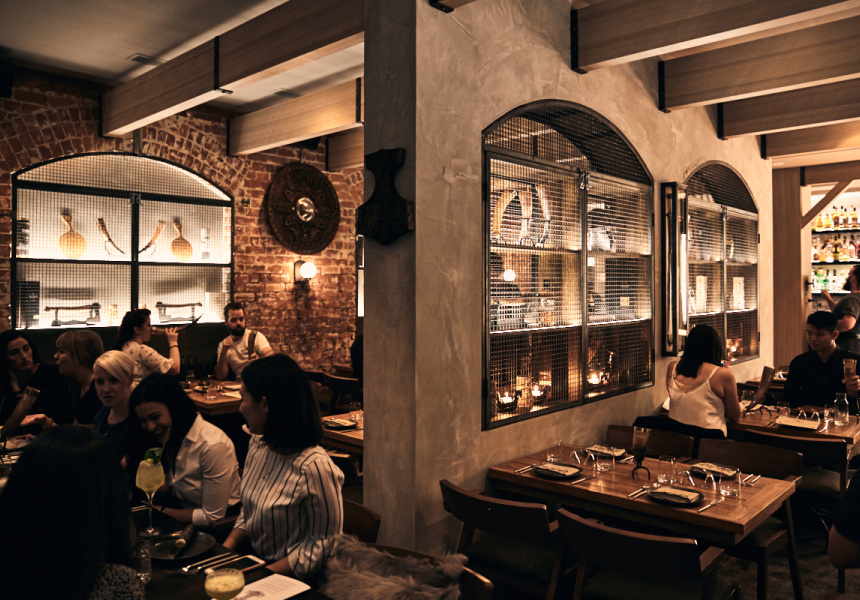 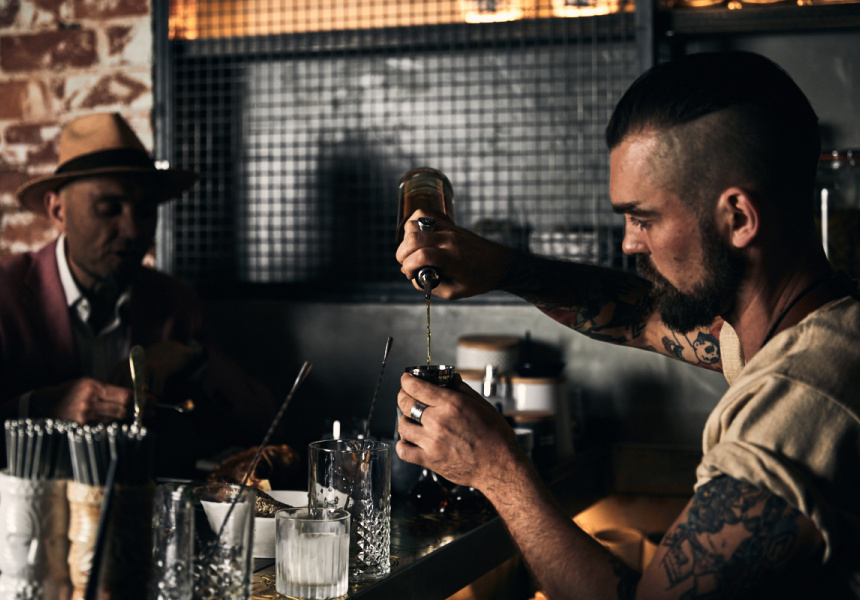 Behind a heavy gold and black carved door on Hardware Street in the CBD you’ll find a host wearing a coarse cotton smock, a leather apron and a dagger at his hip. The dragon-headed prow of a Viking longship bursts forth from the wall, looming over you both, and beside it a three-metre-long chain curtain emblazoned with a giant one-eyed Odin, the mythological Norse king.

This is Mjølner Melbourne. It isn’t subtle, but boy is it fun.

To put it simply, Mjølner is a protein-forward casual fine diner, but that description denies the venue’s outrageous conceit.

“This isn’t really our venue. It’s the Norse god of thunder’s venue,” says co-owner Sven Almenning, who along with Melburnian Greg Sanderson operates the Speakeasy Group (Eau de Vie, Boilermaker House). “The premise is the Avengers are real, so fuckin’ Hulk, Black Widow, Iron Man and Hawkeye are out there protecting planet Earth and amongst them is Thor. I got this idea that Thor’s on Earth and he’s homesick. So he builds this feasting hall where he can relive the merriment of Valhalla.”

Almenning is Norwegian and grew up surrounded by Norse mythology. His kids are even named Odin and Loki, another Norse god. But his new restaurant takes creative license around Norwegian cooking: it’s not trying to present a 1000-year-old Viking menu.

“I don’t want to recreate a menu that existed before refrigeration,” says Almenning. “It’s more: what would Vikings eat today? What would Thor offer up in his bar and restaurant if the Avengers were real? Would Vikings eat bone marrow? Fuck yeah they’d eat bone marrow. Would Thor? Look at the fucking size of the guy, of course he would have big-protein food, meat on bone and whole-animal cooking.”

Yes, this is big brash food. Mjølner – which also has a Sydney outpost – is the antithesis of the austere-walled restaurants where chefs use tweezers to garnish dishes with micro herbs.

“I haven’t got tweezers big enough to pick up my kilo piece of short rib,” jokes chef Andy Wright, previously sous chef at The Point in Albert Park and before that worked as a sous chef for Vue Group. That rib Wright speaks of is braised for more than 12 hours before being served with caramelised brussels sprouts and sticky pan juices.

“Up in Sydney it’s a bit outrageous because we go through 250 kilograms of short ribs per week.”

The rib currently occupies the “Beast” position on a menu also serving “Bird”, “Fish” and “Veg”, some of which may be cooked whole in the kitchen’s giant rotisserie oven. There’s also a larger cut of whole beast (currently roast porchetta), which is carved to order.

When it comes to the starters, there’s nuance. Venison is cured then dried off before it’s seared in a hot pan and rolled in ash. Pillowy, salt-baked celeriac is mounded with sauerkraut and rounded out by slightly smoky whisky butter and the crunch of crisp buckwheat. For dessert, try a delicate bombe Alaska, where tiny flowers of meringue hide mandarin sorbet. Naturally, that one’s also set on fire, right in front of you.

There are runes and glyphs everywhere at Mjølner. Viking iconography is carved into shields, drinking horns, axes and even ornate handmade knives – a selection of which diners are invited to choose from as their weapon of choice at the beginning of their meal.

All of these items have been handmade for the venue by craftspeople from Ukraine to Canada. Even the drip trays in the downstairs cocktail bar have been laser cut with Ouroboros dragons eating their own tails, a detail that few but the bartenders themselves would notice.

The venue is split into two levels; the main dining room on the ground floor and a cocktail bar in the basement. As with other Speakeasy Group venues, cocktails are a big focus here. Dinner begins with a complimentary Stone Skål – an amber shot of stone-boiled vermouth, mead and honey.

Savoury cocktails are a strength. Erik the Red – the house Bloody Mary – includes port, pickled onions, red seaweed and beetroot. It's garnished with a ramekin of salty-sweet potato crisps and pickled chilli. The Bone is a mix of vodka, bone broth and spices. Elsewhere you'll find the bitter and herbal Pine Julep with gin, juniper syrup, a pine-sap infusion and roquette. For something sweeter, the Northern Lights uses, gin, iced riesling, sorrel and elderflower.

Despite the theatrics and embellishments, this is no themed restaurant, something Almenning says customers struggled with when the first Mjølner opened in Sydney last year.

“A lot of people in Sydney thought it was going to be a jousting hall with sword fights, arm wrestling, we pour beer on our chests and drink it off, that kind of stuff,” says Almenning. “But really it’s casual fine dining. Because Thor’s a classy motherfucker man.