Cheesemonger Anthony Femia’s new store has a walk-in cheese-maturation room, rare and boutique cheeses from around the world, and those signature grilled-cheese toasties. 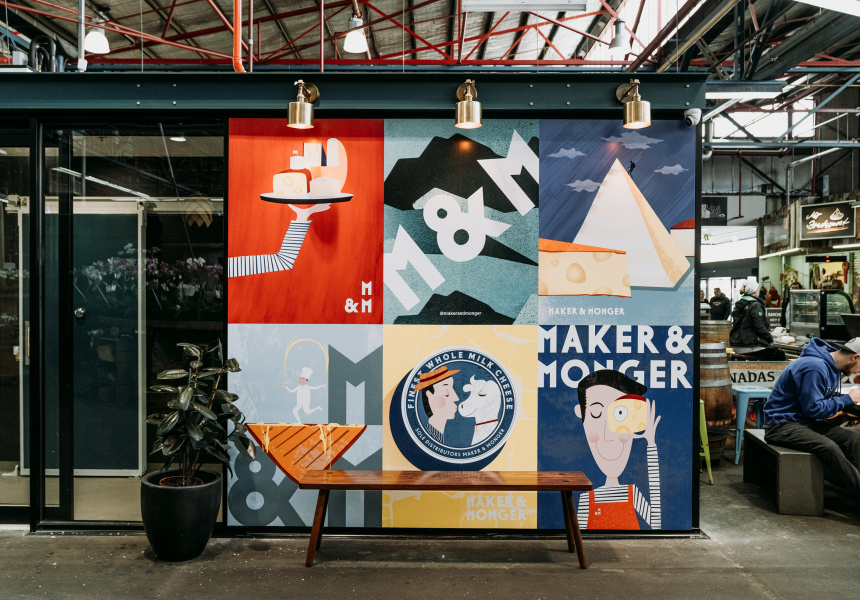 “It’s like walking up to a candy store,” cheesemonger Anthony Femia says of his new self-coined “chapel of cheese” at Prahran Market. And he’s not the only one who thinks so. Just a short time standing by Maker & Monger’s new stall and the magnetic pull of its seven-metre-long cheese cabinet is obvious. Boutique cheeses from around the world are stacked high inside, ranging from creamy gorgonzola scooped to order to huge wheels of Parmigiano Reggiano.

The speciality cheese store first launched at the Prahran Market in 2015. Now Femia’s swapping that artisan food cart for a permanent home in the heritage harvest hall. And while the new store still serves its original and signature Swiss raclette and the All-American grilled-cheese toastie (two American cheeses, onion and parsley on sourdough), the menu has expanded exponentially.

Now there’s breakfast bruschetta with labneh made in-house from Butterfly Factory yoghurt. It comes with candied cumquats, thyme and honey. The Ploughman’s Lunch consists of ham off the bone, hunks of English cheddar, a couple of homemade relishes and some pickled vegetables. The Calabrese toastie is smoked scamorza, ‘nduja and oregano. It sits alongside Femia’s existing signature range of grilled-cheese toasties, each one gooey on the inside, crisp on the outside and sprinkled with a pinch of salt.

A walk-in maturation room is the highlight of this new cheese mecca. The conditions are cave-like: 10 degrees, 90-per-cent relative humidity. Cold water pumped through coils suspended from the ceiling chills the room and allows the cheese rinds to live, breathe and develop texture and flavour. The room will be used to grow microflora too, allowing Femia and his team to buy green (meaning young, unmatured) cheese and mature them.

“It’s up to us as cheese maturers, or affineurs as they call us in France, to know when that cheese is ready,” Femia says. “We do that through sensory analysis as well as talking to the farmer about how they want a particular product.”

For example, Femia works with the affineurs of Marcel Petite Fromagerie in France to select a specific flavour profile for its Comté Réservation. As it matures, it develops nutty and fruity notes – raw cashew, honey, fresh grass – and an incredibly creamy texture.

Other highlights include a Montgomery’s clothbound cheddar from Neal’s Yard Dairy in the UK, cut specially for the store opening and the only one of its kind in Australia. “It’s known as the king of cheddar in England,” Femia says. And a soft and crumbly Langres, a cow’s milk cheese from the French region of Champagne-Ardenne, which Femia recommends pairing with a pinot noir.

Maker & Monger’s drinks licence is still pending, but when it lands in a few weeks’ time Femia will be pairing cheese with wine, sake, cider and mulled whisky.

The fit-out is by Arteveneta (DOC, Embla, Market Lane), with brass pendant lights hanging above the cabinet and green subway tiles forming a backdrop that allows the product to stand out. Raw materials including American walnut timber, marble and steel also feature.

“They’re going to develop natural scratches through time,” Femia says. “The shop is just going to mature like a beautifully matured cheddar.” 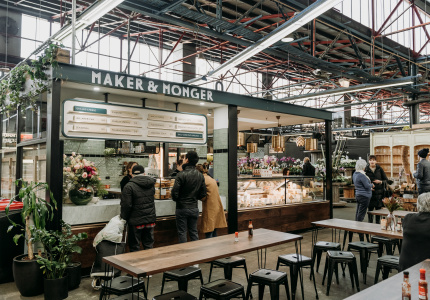