Just three bartenders work at this 40-person spot – one’s on subtle drinks, another’s on sweet, and one’s doing harder-hitting concoctions – where drinks channel Christmas pudding with custard; and miso, rice vinegar and tomato for a take on Japanese breakfast. 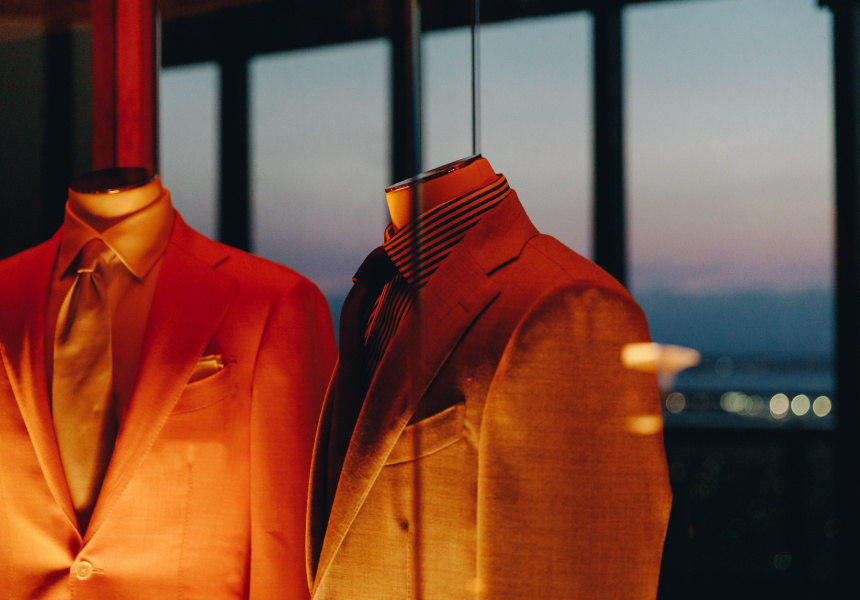 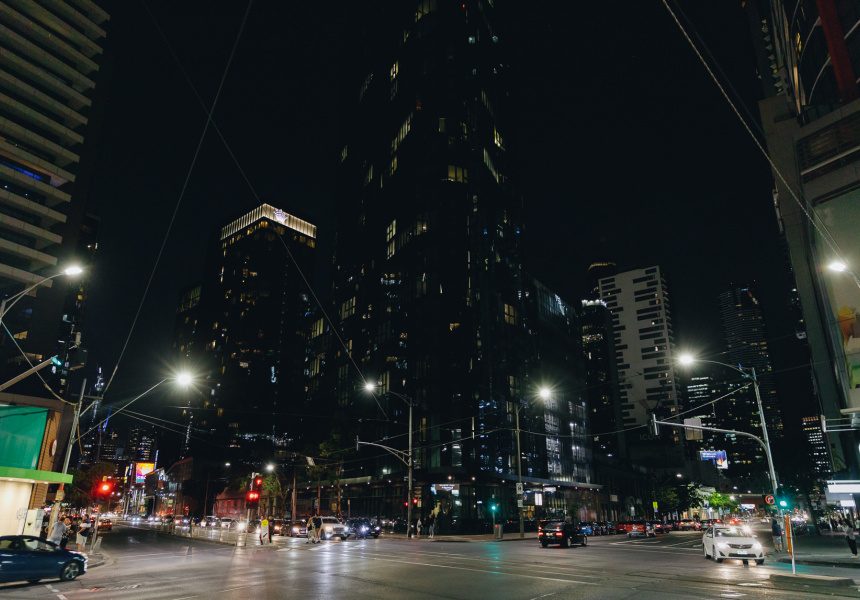 Forty-six floors up, past a gold door and through a tiny pink foyer, the first thing you’ll notice about Cloakroom Bar is its spectacular view of the city skyline. But this small 40-person bar isn’t just about drinking in the sky.

Cloakroom is by business partners Andrew Byrne, Callum O’Sullivan, Louis Ialenti, Jonathan Hallinan and Aidan Chappell, and was originally a men’s tailor. The first Cloakroom opened in Brisbane in 2007, followed by Maison Cloakroom in Montreal, Canada in 2014, and a Toyko outpost in 2017.

The suits – made in Japan’s Ginza district – are now just one half of the business.

“[The suits are] true ‘made to measure’. They’re cut by laser and assembled by hand, which means they’re millimetre perfect every time,” O’Sullivan says.

“Lots of tailors will [offer] whisky when you’re sitting down. In our shop in Montreal, there was a little bit of space to the left, and the landlord was like, ‘Take it. For as cheap as possible’.”

And so, the team decided to apply their made-to-measure philosophy to cocktails. At the Montreal spot there’s no menu. Instead, a bartender nails down the flavours you love and mixes something that fits the bill. Brisbane followed suit in 2017, but has since closed.

Melbourne retains this approach but introduces a 10-strong cocktail list to make the most of elements prepared ahead of time, such as house-smoked preserves, infused liqueurs and reductions that can be tricky to work into the custom cocktail routine.

There are just three bar staff, and their rapport is natural and inviting. Bartenders Scotty Nolan and Tim Pope laugh when talking about manager Tony Huang’s career progression. Huang was once head bartender at Lui Bar on the 55th floor of the Rialto – the running joke is that he’s slowly making his way to the ground floor, one bar and one building at a time.

The subtle Japanese thread running through both of Cloakroom’s businesses kicks off with Huang’s cocktail, Day 1.

“It’s a Japanese-like vodka Martini with sake,” he says. “The pickled cherry tomato is like a construct of the Japanese breakfast – you’ve got miso, rice vinegar, seaweed – a little bit sour, a little bit bitter, a little sweet. Tomato gives umami.”

Huang tends to make subtle-but-complex drinks, where Pope plays with harder-hitting elements. Pear Necessities is his way of opening people up to the power of peated whisky, without hitting them in the head with it.

“We infuse Lillet Blanc with black pepper. The pepper is kind of like a flavour enhancer,” he says. The peppery aperitif wine is then combined with Bowmore No.1, a whisky with a little smokiness. Then Pope adds a house-made smoked pear syrup. “Smoke and spice work to carry the flavour through. I want to make a strong stir-down that you can still drink on a 40-degree day.” Nolan admits he’s the sweet cocktails guy. His creation, Good Pudding, brings to mind a classic Christmas dessert.

“It started when I was in a tequila [cocktail-making] competition. The tequila reminded me of very nutty, very summery flavours. Very Christmas. And what’s your favourite thing to eat on Christmas? Christmas pudding. That gave me the idea of using custard.”

The custard is smoked with applewood, then shaken with agave, reposado tequila and Hennessy.

Beyond cocktails, the Cloakroom bar offers a small selection of international wines – white Burgundy, Austrian gruner veltliner, chianti, Champagne – and a small offering including cheese and charcuterie. A Cloakroom bar menu is in the works.

This article first appeared on Broadsheet on January 23, 2020. Menu items may have changed since publication.