Departing from its typical Latin American flavours, the group is focusing on yakitori and kushiyaki cooked over traditional binchotan charcoal. Take a seat at the bar to watch the action, including masterful slicing by an in-house sashimi chef. Plus, there’s an impressive sake collection and a fit-out straight from the streets of Tokyo. 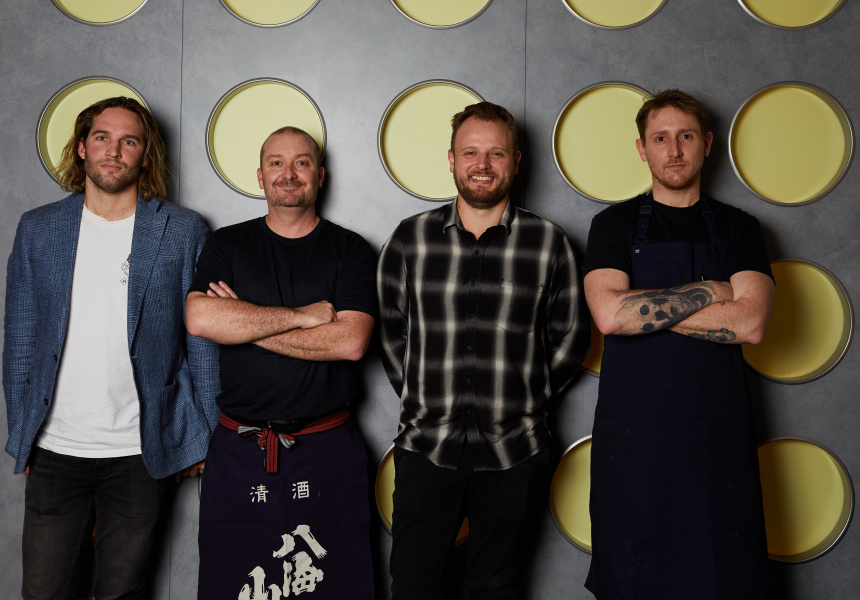 South American food has always been the focus for the San Telmo Group, whose portfolio comprises San Telmo, Asado, Palermo and Pastuso.

But with Robata, the team has added Japanese to the mix. This is a smaller jump than it seems, as Robata shares the other venues’ emphasis on chargrilled meats. The name is a common abbreviation of robatayaki, a Japanese charcoal-grilling technique that translates literally to “fireside cooking”.

“We’re trying to keep it sort of in line with the rest of the group, hence the barbeque,” says head chef and co-owner Stephen Clark, who formerly led the kitchen at San Telmo.

But while the medium is the same, the style is different.

“For one, there’s a lot less beef here,” Clark says. Instead, yakitori (chicken skewers) are the protein of choice – prepared as thighs, breasts, wings, meatballs or hearts. There are also a few kushiyaki (non-chicken skewers) such as wagyu, pork belly, Skull Island prawns and shiitake.

Most are grilled over binchotan, a neutral charcoal used specifically for yakitori. Thanks to its high carbon make-up, it’s virtually odourless and burns clean, imparting minimal flavour.

“It’s very subtle, so you’re just relying on the flavour of the ingredient and cooking it well,” Clark says.

That said, each skewer is paired with a specific dressing. The meatballs are brushed in tare (a sweet, thick soy-based sauce) and served with a cured egg yolk; the hearts are coated in shichimi (a dried chilli blend); and the wings are intentionally simple, sprayed only with sake before cooking.

While skewers range from $6 to $14, there are a few heftier menu items including a pork tonkatsu with cabbage, and a kaisen don prepared with sashimi-grade fish, trout roe and cucumber over rice. Whatever’s used in the don also makes an appearance on the concise sashimi menu, which changes regularly.

“We’re trying to stay as traditional as possible while still having room to experiment and elaborate on things we’ve eaten before,” Clark says.

Located in Gazi’s former digs, Robata is a large space with room for over 100 guests. The prime spot is at the kitchen bar, for a close-up view of chefs working the robatayaki grills and carefully slicing sashimi.

Even if you don’t snag a seat there, the fit-out – designed by architect Ewert Leaf – still offers plenty to look at. Electric neon signs welcome you in, while light boxes emblazoned with Japanese phrases hang from the ceiling.

“It was inspired by experiences in Tokyo,” Clark says. “Particularly in Shibuya and places like that, where there are all the lights and crazy streetscapes.”

While you soak up your surroundings, sip a sake or a Japanese whisky. The restaurant offers impressive selections of both, available straight or worked into cocktails such as the Ancient Remedy, a smooth blend of Nikka whisky, ginger, honey, lemon and matcha. 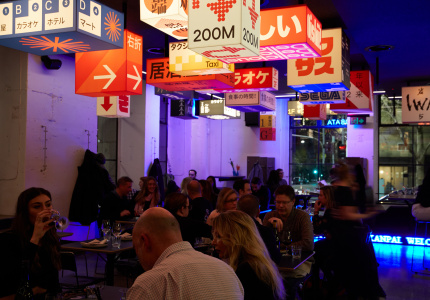