Chef David Green, formerly of Daylesford’s Lake House, is at the helm of this seafood-centric bayside diner – which came to life with help from Oh Loretta’s Kate Peat. Local seafood reigns supreme, and the team forage for ingredients as far south as the Otways. “It’s a bit corny, but I believe seafood always tastes better by the ocean.”

The new seafood destination is in a double-storey building overlooking Port Melbourne beach and – when it’s docked – the Spirit of Tasmania. It’s by first-time operators Sonia and George Brewty, who recruited Kate Peat – of Northcote’s European wine bar Oh Loretta – to consult on the conception and execution of the project.

Green says that after so much time working inland (and serving comparatively meat-focussed dishes), it’s a pleasure cooking with ocean-fresh produce. Much of Dakota’s seafood is sourced locally, including scallops and sea urchin from Hobsons Bay and mussels from Port Arlington. This local focus extends beyond seafood, though, with Green and his team foraging everything from native saltbush across the road to mushrooms deep in the Otways.

A showstopper, Green says, is the whole-roasted Port Phillip Bay snapper, flavoured with lemongrass, glazed in garum (fermented fish sauce) and finished with pickled summer vegetables. “People have said to us it’s the best fish they’ve ever eaten,” he says.

This is the kind of food you’ll want to share, punctuated with side dishes such as whole, hot-smoked cauliflower with za’atar and green-olive puree, and charred baby gem lettuce with whipped buttermilk and cured yolk.

While the team gets on its feet, only this relaxed, share menu will be offered. But down the track, the upstairs space will transform into something of a fine diner. Expect a six-course menu with matched Australian and European wines.

But that’s a far cry from what the owners had planned. “We wanted to open a small cafe at first, [but] that quickly evolved into something much larger,” Sonia says.

“We knew we wanted to do something by the water, so we were looking for sites in Williamstown, Torquay and Sorrento,” she adds. “This site popped up and as soon as we entered, we knew it was the one.”

The bright, largely white-walled space (previously Mr Lawrence) has lofty ceilings, light timbers and blue hues (including a tentacle-y mural) throughout, inspired by its bayside location. There’s a grand 16-person dining table and more intimate tables for couples, and a private dining room is in the works.

Sonia is thrilled to introduce something new to this part of the city, especially for the Port Melbourne locals. “I’ve been told they’ve had their eye on us for a while.” 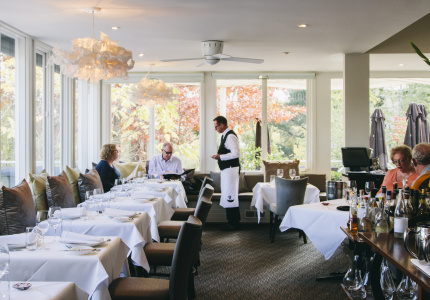