The Thornbury bakery – which makes nothing but delicate, moreish pastéis de nata – has opened a second spot, where you can watch the behind-the-scenes process under a giant neon tart. Before that there was a trip to Portugal, where they learned to make tarts, and ate as many as they could in the name of research. Casa Nata tarts are simple, made only with milk, flour, eggs, sugar and Pepe Saya butter, pressed into moulds by hand and given a light dusting of cinnamon. As in Portugal, the semi-soft egg custard filling isn’t flavoured – it’s intentionally neutral to work in harmony with the delicate, flaky shell.

Now the pair – both of Portuguese descent – have taken their gooey pastéis de nata south side, opening a second outpost in Windsor. The idea for a store in the general area came after the success of Casa Nata’s pop-up cart in Toorak Village during lockdown.

“It was kind of a fluke,” Bertolo says of the new location. “We just went to Chapel Street for lunch and then found a really good spot.”

Much like the original north-side store, the new space has a minimalistic marble fit-out – but if you look up, you’ll find a large-scale neon tart replica on the ceiling. Bertolo’s sister, Vania Marotta, did the design with support from Collingwood-based architecture studio Pepper & Well.

Stools are placed right up against the open glass-box kitchen so you can watch the behind-the-scenes process of making the tarts. Enjoy yours with a coffee by Code Black.

“It’s exactly the same [as Thornbury] – so just coffee and tarts,” says Bertolo. “But it’s a little bit more intimate this time.” 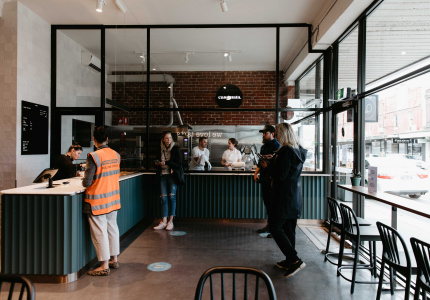