Before opening the original Indu in Sydney in 2015, owner Sam Prince was working in Sri Lanka as a doctor. But, despite already being entrenched in the hospo industry (fun fact: he founded Zambrero), it was the first time he looked to his Sri Lankan heritage for inspiration.

“We were in a war zone and the people would give back to us by putting on this amazing spread,” Prince says. “It got me thinking about what we do and don’t know about Indian and Sri Lankan food [in Australia].”

At that time, he reckons, some Aussies were just discovering the nuances of Sri Lankan and South Indian food.

While local palates are significantly more culturally conscious in 2021, Prince’s mission remains largely unchanged. At Indu’s newly opened Melbourne outpost – on Collins Street in the CBD – he wants to champion Sri Lankan and South Indian cuisine while highlighting their individuality. In his words: “It’s like the difference between a German shepherd and a golden retriever”.

That’s not to say the food at Indu is strictly traditional. Sure, you’ll find aromatic, real-deal Sri Lankan curries (Prince’s mum’s recipes are used for the coconut-y red-lentil dal and the potato curry), plenty of hoppers (Sri Lanka’s bowl-shaped answer to pancakes, here filled with pickled eggplant, pomegranate pearls, goat’s curd and sambol), and house-made paratha (a layered Indian flatbread). But fusion isn’t off the cards.

“To the left you have super [traditional], and to the right you have the Australian taste palates,” Prince says. “The game is finding out where there’s crossover.”

For Prince and co-owner Ian Hicks, the crossover looks like this: dosas with smoked Yarra Valley goat’s leg, bacon jam and zucchini raita; and crisp besan (chickpea flour), tamarind and cardamom fritters, not unlike polenta chips. Plus, curries made with Mount Mercer pork and Lachlan Valley lamb.

Desserts include spiced carrot cake with coriander icing; vegan chocolate-and-cardamom mousse; and mint granita with coconut ice-cream and a pistachio crunch – all of which pair wonderfully with the Smoked Chai Old Fashioned. The rest of the drinks list is dominated by gin and Australian wines – including aromatic and textural varietals such as fiano and gruner veltliner, and spicy grenache blends – that pair well with the food.

If it weren’t for Hicks, Indu wouldn’t have settled in its current spot, behind a Victorian terrace frontage, which he operated as Collins Quarter for seven years.

It’s now fitted out with a palatial mirrored doorway, secluded booths separated by soft linen curtains, and a private upstairs dining room featuring the building’s original stained-glass windows. There are also large terracotta pots overflowing with spices and dried chillies, and murals by Melbourne artist Ash Keating (the same as those on display at the Sydney original). 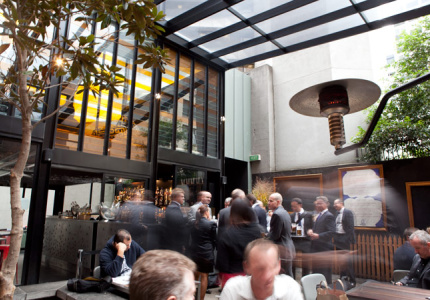