First Look: Bar Margaux Is Dark, Lively and Open Until 5am

Walk down the nondescript staircase, let your eyes adjust, and take in the white tiles, red leather booths and the long bar with plenty of seats. There’s no natural light at the new bistro from the Heartbreaker and Everleigh team – that’s why it’s so easy to lose track of time. 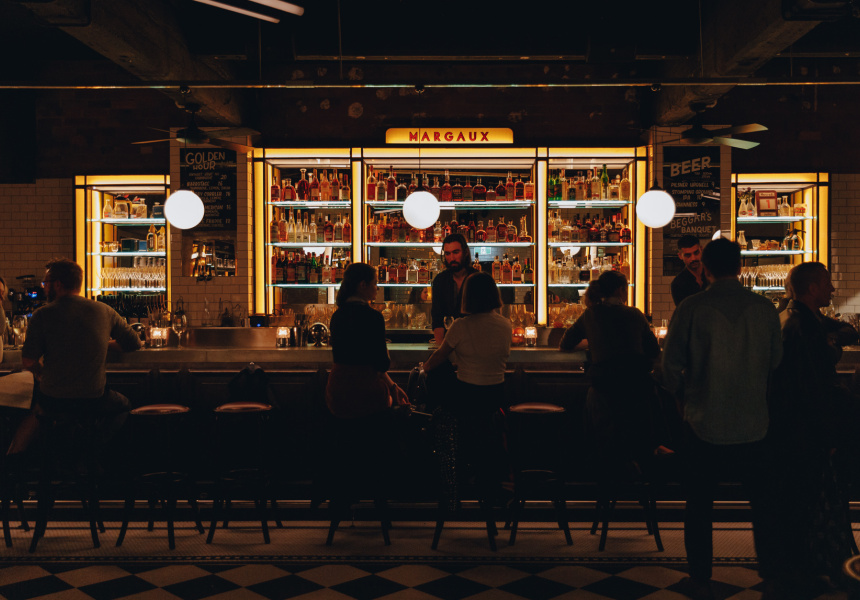 Bar Margaux is dark, lively, and open late. The entrance is down a nondescript, utilitarian staircase. The door is plain and just says “MGX”, but when it opens you’re met with a vibrant buzz of music and chatter.

When your eyes adjust to the low lights, you’ll see white tiles, red leather booths and a long bar with plenty of seats. There’s no natural light, no hint of the Melbourne weather outside. The space is designed to evoke a late-night, New York-inspired French bistro. Owners Michael and Zara Madrusan (of Made in the Shade Group) enlisted Dave Kerr (former owner of The Beaufort) and Michael’s interior designer sister Deanie Madrusan to work on the project. And whether you’re arriving at 4pm to start your night or finishing up at 5am Sunday morning, the room won’t feel too different.

And while that means diners might be ordering cheeseburgers and lobster croque monsieurs well into the early hours, the husband-and-wife team is keen to maintain a high standard of service, no matter the time.

“This is a glamorous, gorgeous space and we have to work hard to make sure that people feel comfortable and relaxed,” Zara says. “That comes down to the service.”

The menu, with chef Daniel Southern (The Craft & Co, Sth Central) at the helm, is unashamedly French. The à la carte menu is all about classics such as steak tartare, escargot (snails in lots of garlic and Pernod butter), and soupe à l’oignon (French onion soup). The latter features rich beef stock, five-hour caramelised onions, and a slice of baguette with melted Gruyere on top. You’ll want to eat it all yourself, but it’s so decadent it’s better shared with a friend. The burger here comes with two Wagyu patties, bacon, organic cheese, and a bordelaise sauce (bone marrow, shallots, port and a lot of pepper) on a milk-brioche bun. It’ll swiftly satiate any late-night burger craving.

There’ll also always be a plats du jour (dish of the day) – including beef bourguignon on Monday, bouillabaisse on Thursday and coq au vin on Friday – and during Golden Hour (every day from 4pm until 6pm, then again from 12am until close) you can indulge in pairings such as oysters and champagne or a cheeseburger and a glass of burgundy for $29.

“We’re aware that people haven’t necessarily got money to throw around right now,” says Zara. “And it’s not the time for that. So the menu is going to be really approachable and affordable.”

After midnight, a shorter supper menu kicks in, but there’s also the addition of a croque monsieur filled with rotisserie lobster, curry beurre fondue (a butter emulsion) and Comté to the list.

Dessert is also traditionally French, with tarte mousse au chocolat, crème brûlée and a souffle du jour with a side of ice-cream. The souffle is so puffy you’ll get almost as much pleasure watching the ice-cream sink into the cloud as you will eating it. Like the soup, you could eat it alone, but its decadence is probably best shared.

As at The Everleigh, cocktails lean toward the classics. You can get a “snack size” (half serve) Martini or Manhattan for $12, and a mini beer in the form of a 210-millilitre Miller High Life. The tight wine list is by Made in the Shade group manager Marty McCaig (also owner of South Press). It’s a good mix of French drops and locally made French varietals, with everything available by the glass. Prices start at $13 for a glass of 2017 La Cuvée des Copains grenache, and go up to $50 for a glass of NV Krug Grande Cuvée champagne.

In many ways Bar Margaux isn’t anything new – classic French food, classic cocktails, Paris-meets-NYC interiors – but that’s the point. Zara likens the subterranean bar’s simplicity to the Daiquiri at their first venue, the Everleigh.

“[It’s] three ingredients and a chunky slice of lime. When you go to the root of things and the heritage of things, and keep things simple and clean, we think they’re probably best that way,” she says. “Keep it simple, keep it delicious.”

This article first appeared on Broadsheet on July 1, 2019. Menu items may have changed since publication.