In a warm space that seats 120 across three tiered levels, sip a coffee-tonic spritz or cold brew spiked with cardamom and cinnamon, and dine on red-velvet pancakes, spicy baked eggs and raspberry-almond croissants. “We had the hoarding up out the front of this building saying we were coming for – what – six months?” says Megan Evans, co-owner of the Axil Coffee Roasters at Melbourne Central.

Three months after the slick new outpost at the Ella food hub was due to open, it’s finally here.

This is the largest Axil to date. The warm and expansive space seats 120 across three tiered levels, stepping down to Elizabeth Street. Part of the cafe spills out into the lobby of the adjoining office tower and is exclusively for its workers.

Savoury dishes include baked eggs with peperonata (spicy slow-cooked capsicum and tomato), dukkah, Meredith feta and Dench toast; zucchini, corn and haloumi fritters topped with sweet-potato crisps and a poached egg; a croque madame with pulled ham hock, a fried egg and bacon crumbs (with an apple-fennel salad on the side); and a brisket burger with pickled beetroot and celeriac slaw.

This is the 10th Axil from husband-and-wife team Dave and Zoe Makin, who opened the Hawthorn flagship in 2011. Last year the team opened its first brunch spot in the CBD and an espresso bar at Melbourne Airport. The business model allows key staff to buy into the business or certain locations. Mitchell Heyman started out as a barista at an Axil espresso bar, then went onto manage the Hawthorn store. Now he’s signed on as co-owner of the Melbourne Central outpost with Evans and the Makins.

“When I was hired, I told the guy who hired me that [eventually] I want to manage a shop, and then I want to own a shop,” he says. “And it’s done.”

Designed by Prahran firm St Style (Prohibition Food and Wine, Fonda Collingwood, Abacus Bar and Kitchen), the fit-out is a mix of textures and colours, with an all-glass exterior in place of walls. Behind the timber counter and baby-pink espresso machine is a curved mirror reflecting the tiles, bricks, concrete, brass and dusty-green accents around the space. 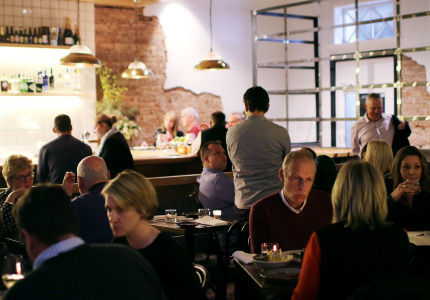 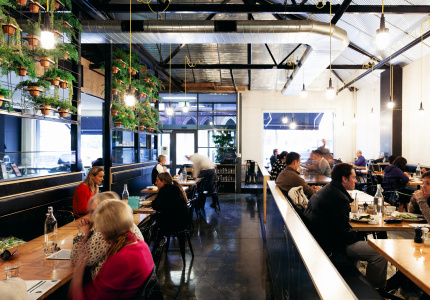