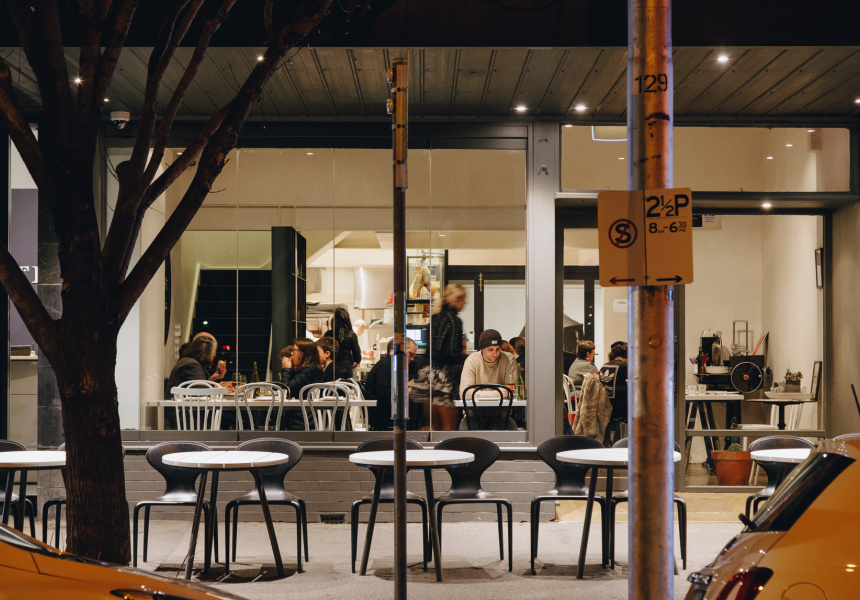 It’s 3pm on a rainy Friday afternoon when I step into Italian Artisans. A father and son carpentry team is working out the front crafting circular dining tables. Out back, in the newly renovated dining room, owner Tony Nicolini is entertaining a large group.

Nicolini is best known for championing artisan pizza as former part-owner of DOC Carlton, DOC Espresso, DOC Mornington, DOC Albert Park and DOC Delicatessen. Now, he’s opened Italian Artisans in the old DOC Albert Park space. The name – notably sans “DOC” – is a nod to the people he works with and is inspired by.

“[Italian Artisans] is very much a passion project,” Nicolini says. “After 20 years in the industry building a big brand, I’d like to celebrate those little bits and pieces that helped me get to where I am today – the people behind it.”

Those people include the Fragrassi and Ursini families, who supply tomatoes from the Italian region of Abruzzo; the Alvise family, who supply Puglian olive oil; and the Bamonte family, Italo-Australian mozzarella producers based in NSW.

“The first artisan that I’d like to celebrate is my father, who introduced me to this wonderful world – this crazy industry,” Nicolini says; after moving from Italy to Australia, Vitaliano Nicolini opened his first pizzeria, Nicolini’s, on the Gold Coast in 1969. “I lost dad in the last few years [so] it fills the heart to be taking similar footsteps.”

Nicolini tells me that pizza is still “king”, but he’s experimenting with alternative grains (from central Southern Italy) to make it more “digestible, nutritious, and tastier.”

“Nowadays people are looking for something less filling, something that makes you feel better,” Nicolini says.

At this point in our conversation the carpenters shuffle through the door with a new dining table. “These are the artisans,” Nicolini says, admiringly.

“I want to pare things back a little bit. Rather than putting four or five ingredients on a pizza, let’s put two or three, and let’s make them better ingredients,” Nicolini says.

Other pizzas include porcini mushroom with truffle oil; the Culatello with smoked burrata; and one with tiger prawns, rocket and chilli. An Italian grain salad has buckwheat, black rice, chickpeas, pesto, carrots and almonds.

Ronnie Di Stasio (Cafe Di Stasio) and designer Piero Gesualdi – former owners of (now-closed) Melbourne institution Rosati – are part of the group Nicolini was entertaining before I arrived. They leave the group and make themselves comfortable at our table.

“Tu parla Italiano, vero? [Do you speak Italian?]” Di Stasio asks me. I’m regretting my decision in high school to study French instead of Italian. Thankful I know abbastanza (“enough”) to get by.

“Tony mentioned the other week that he wants to make antipasto sexy again,” Gesualdi says. “And the one thing that we oldies hit him over the head with is, ‘Don’t ever try and reinvent the wheel – just repackage it’. The wheel has been invented! You can’t invent it anymore!”

Nicolini plans to dial things up on the antipasto menu with 24-month-aged prosciutto, house-pickled vegetables and fresh cheeses.

“Gastronomic marriages will be celebrated, like burrata and bottarga, mortadella and stracciatella, and caponata and Salina capers,” he says. For dessert, Nicolini celebrates another family artisan – his father-in-law and pastry chef Joseph Cavallaro, who has made a classic ricotta cannoli with candied orange and pistachio. There’s also a Nutella calzone, and goat’s-cheese tiramisu.

The extensive drinks list includes minimal-intervention wines from Puglia, Toscana, Piemonte and Veneto; a stellar lambrusco from the Emilia-Romagna region; and Italian microbrews, including the malty, slightly herbaceous Baladin Pop from Piemonte.

Much of the fit-out is the same as at DOC Albert Park, with whitewashed walls, polished-concrete floors and custom timber furniture, but Nicolini has plans to transform the front of the restaurant into a retail space. “It’s about showcasing the ingredients we use and giving people an opportunity to take them away with them.”

This article first appeared on Broadsheet on August 30, 2018. Menu items may have changed since publication.