First Look: After 25 Years, CBD Stalwart Il Bacaro Gets a Sleek Refurb and Returns to Its Venetian Roots

Refined new dishes such as a delicate “fish charcuterie board” and silver-leaf-crowned zucchini risotto sit alongside enduring classics such as the Moreton Bay bug spaghettini. Plus, there’s a new Bellini focus, and an intriguing parmesan-infused Martini. 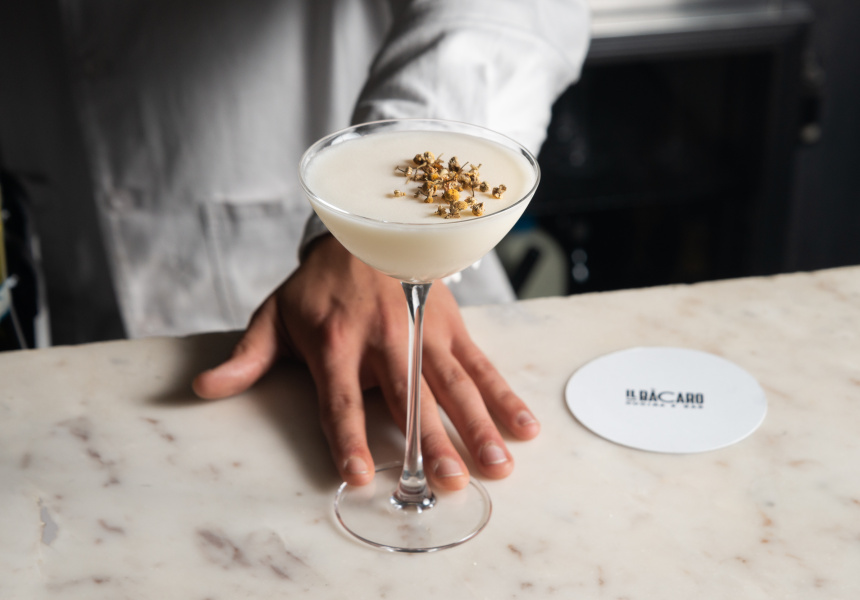 In recent years, Carolina Group’s stable of restaurants has grown to include Italian diner Bar Carolina and upstairs cocktail spot Tetto di Carolina in South Yarra, as well as Marameo (the replacement for Sarti). But in 2020 focus shifted back to the group’s OG venue, Il Bacaro – a godfather of the city’s dining scene – which celebrates its 25th anniversary this month.

“Il Bacaro is the jewel in the crown for us,” says Joe Mammone, who runs Carolina Group with Marco Tenuta and David Dellai. “It’s the place where our waiters strive to work, where they ‘graduate’, we say … Now it’s time to take it to that next level.”

“It started off as a Venetian-inspired restaurant,” he says. “Over the years it broadened to cover more of Italy on the menu, but now we’re going back to a Venetian focus.”

While the menu is condensed, the dishes are more refined. And many of the new arrivals were inspired by Mammone’s most recent trip to Italy, including the crudo di mare plate (which he likens to a “fish charcuterie plate”). “I’m a massive fan of sashimi and many Italians, including myself, eat a lot of fish. So, I thought, let’s do a crudo.” It’s a delicate arrangement of red prawns with roe, seared kingfish, oysters with cucumber granita, plus tuna and scallops.

The Venetian emphasis flows into the 400-strong wine list, which features back vintages from Tedeschi and Giuseppe Quintarelli, two of the region’s lauded producers. Plus, a well-rounded selection of nebbiolo, barbaresco and barolo.

With an innovative cocktail menu by the group’s chief mixologist, Giuseppe Lantano, Il Bacaro 2.0 is out to make Bellini Hour a thing. There’s a classic Bellini with peach puree; another with St Germain, cucumber and lemon thyme; and an almost-too-pretty lavender version with lavender syrup and crème de violette (violet liqueur). “We take crème de violette and add gin infused with butterfly pea flower, which turns from bright blue to a deep purple when you add a touch of lemon juice, or any acid, to it,” says Lantano. “It’s shaken, strained into a champagne flute, topped with prosecco and garnished with a lavender flower. It’s sweet, floral and refreshing.”

On the savoury side, there’s the intriguing parmesan Martini. “We’ve infused an umami gin with aged parmesan and black capers, which is stirred with dry vermouth and lots of ice before being strained into a Martini glass,” says Lantano. “We serve it with parmesan crackers – pieces of parmesan melted in the oven until they’re delicately thin and crispy.”

The space hasn’t been touched for 25 years, save for a few coats of paint. So the team tapped original designer Chris Connell to do the refurb. (His original design was inducted into the Eat Drink Design Awards’ Hall of Fame.)

Connell has also designed all of Carolina Group’s venues. “He is our go-to, we work really well together,” says Mammone. “We understand each other and there is respect for different perspectives.”

The brief was to refresh the space, but not dramatically. So, if returning customers walked in, they’d notice a change but not be shocked by a complete overhaul. The iconic centrepiece bar remains but the floors are now stained a darker brown, the yellow accents that once swept the space have been swapped for sky blue, and Italian string lighting from Bologna-founded designer Viabizzuno subtly illuminates the intimate space. Walnut timber, polished-concrete render and white Carrara marble also feature throughout. Plus, for the first time there’s also outdoor seating, with space for 25 people. 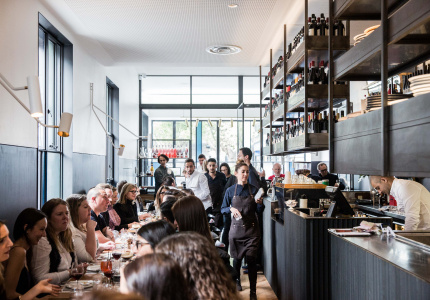