The much-anticipated new spot by the Ramblr and Leonard’s House of Love crew has taken up residence in the old Pizza by the Metre building, but it feels like it’s been there forever. 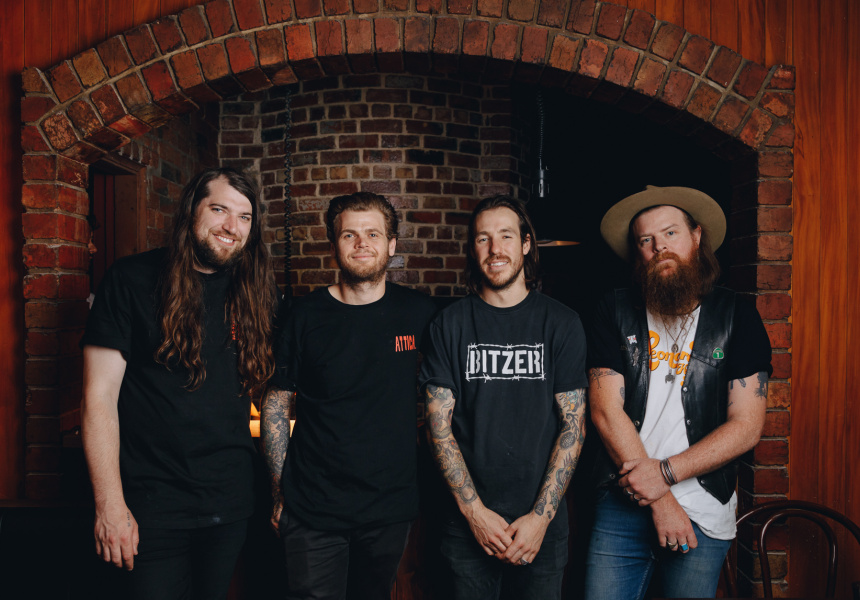 When the name of a restaurant includes the words “pizza palace”, it’s got a lot to live up to. So when a fridge malfunctioned at Leonardo’s Pizza Palace on opening night – causing the all-important pizza dough to not rise – you can imagine the sense of quietly rising panic among the team.

Thankfully, that rogue fridge has been replaced, and owners Nick Stanton, Guy Bentley, Mark Catsburg and John Harper can breathe a collective sigh of relief their carefully crafted retro-Italian signage and takeaway-style fold-out menus need not be remade. (“Leonardo’s Schnitzel Palace” doesn’t quite have the same ring to it, though there's an argument that could be made in its favour.)

Stanton, Bentley, Catsburg and Harper are the also behind acclaimed casual fine diner Ramblr and party bar Leonard’s House of Love – both in the south – and they’ve transplanted the vibe of the latter across the river to Carlton.

The building was once home to Da Salvatore Pizza by the Metre. It’d been open since 1959, and while the pizzas weren’t the best in the city, it’s still a little sad to see such a longstanding venue close as Carlton’s latest new restaurant wave sweeps in. (Kazuki’s, Super Ling and Shinbashi and King & Godfree have all opened in the area within the last few months.

“We were up against some pretty big operators for this place. The main reason we got it is we didn’t want to knock the place down and turn it into a modern, new-age venue,” Stanton says. “Our plan was and has always been to find something like this and keep its original bones and give it that old, little bit retro, little bit old-school feel.”

Seventies-style timber panelling on the walls, stacked terracotta wine racks behind the bar, terrazzo flooring (which Stanton and co discovered “hiding underneath these weird green bathroom tiles” when they were doing the fit-out) all combine to make Leonardo’s feel like it’s been here forever. In the front bar, under one of many brick archways, a DJ plays tunes from Journey, Johnny Cash and No Zu under the glow of neon Coors Light signage. Beanie-clad bartenders are quick to sort you out with a longneck of Melbourne or a minimal intervention wine and a crostini.

The den-like, no-bookings dining room beyond is serving old-school Italian. The shutters on the windows are closed, so even if it’s light outside it’s always night-time in here. Shouts and laughter rumble in from the front bar. It’s the kind of place you could accidentally spend hours in, and wake up dustier than you’d planned.

Waiters zip across red carpeted floors between compact leather booths. Faded photos of the original owner Salvatore Mercogliano making pizza back in the ’70s are on the walls, among other black-and-white pictures of the Beatles, Marylin Monroe and a plethora of vintage bombshells eating pasta.

“We’re peeling it right back to where it was probably in its heyday,” Stanton says. “[For the] pizza oven, we got a bricklayer to source old recycled bricks to match the brick walls in the venue … You look at the pizza oven and it’s like, ‘Oh shit, looks like it’s been there forever.’ That’s the sort of vibe we’re going for.”

At the back of the dining room, another arched opening frames Leonardo’s chefs plating standout eight-slice pepperoni pizzas, among others, served with little cups of ranch dressing “for dipping”.

“It’s our own pepperoni. I’ve been working with the butcher [Gary’s Quality Meats] for a few months trying to get it right,” Stanton says. “And I’m all about the pepperoni cups. You know when you cook it and they cup up, and they fill up with oil … I love watching that happen.”

More current is the anchovy, roast pepper, olive and caper pizza, or a pork and fennel sausage option with garlic oil and sage. There are plans to turn the signature Ramblr Chinese bolognese into a pizza someday, but for now the most controversial pie on the list is ham and pineapple.

“It’s a love-hate relationship but fuck it, it’s nostalgia,” Stanton says. “People get excited over that kind of stuff, and so do we. We’re not trying to be fancy or trying to be different, or reinventing the wheel.”

Stanton helms the kitchen, which apart from pizza and house-made pasta churns out smashable, approachable start-of-the-night dishes that lend themselves to a raucous evening. (There’s a reason the coasters say “drink and dine”, not the other way around.) Start with fried sardines and whipped bottarga on super-thin crostini, or a hunk of creamy, soft stracciatella with salt and vinegar marinated, blisteringly hot jalapenos.

A salad of sugar-snap peas, charred broccolini and almonds coated in macadamia cream and shaved pecorino is pretty outstanding. Unrivalled though is the chicken schnitzel – the warped, deep-gold disc arrives with a tonne of garlic butter and capers piled on top.

There’s more seating outside, and plans to open the upper levels in the coming months, too. There’s also a private booth that backs on to the kitchen.

“We call it the naughty room. We’re putting a big-arse disco ball in there. Eat, drink, party, do whatever you like really,” Stanton says. “Actually, it’s not completely private, so you can’t be too naughty.”

This article first appeared on Broadsheet on December 3, 2018. Menu items may have changed since publication.