The mood is set to calm in this polished space that brings the holistic art of Japanese tea to the already well-caffeinated Johnston Street. Take your time and partake in a free 30-minute tea ceremony. 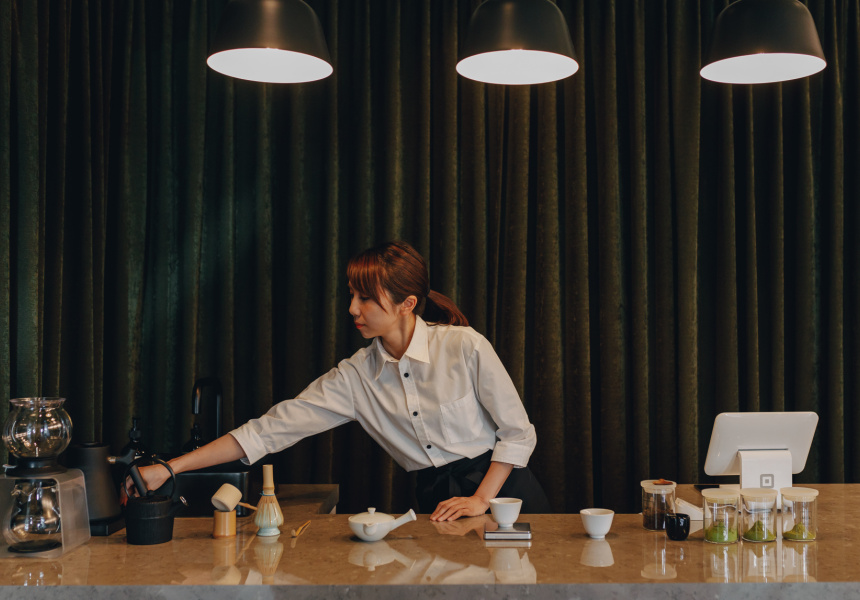 At Collingwood tea studio Harvest Index, moss-coloured velvet curtains and light jazz combine to effectively set the mood to calm. Together with the marble tea-tasting bar, which is the focal point of the room, light timber panelling and emerald design elements throughout, the room feels a bit like a traditional Japanese teahouse, albeit with a modern edge.

“It’s really drastic in comparison with being out on the busy street,” says co-owner Benjamin Wright. “Your senses aren’t being overwhelmed, so you’re able to enjoy the flavour and smell of each tea.”

Until earlier this year, Harvest Index was a website based in Tokyo, owned by Takeuchi Yukiya and Goro Ishii. This is the company's first overseas venture and its first physical store. Wright and business partner Lachlan Sinclair (the two also run a creative agency called LVDI) joined Yukiya and Ishii to open the Johnston Street studio, crafting the space and running the shop.

“It doesn’t fit in the box that our usual client-agency relationship [does],” Wright says. “We’re a bit more intimately involved.”

While the plan is to expand and change the offering regularly, Harvest Index launched earlier this year with six tea varieties: matcha, sencha, genmaicha, hojicha, mizudashi cha and wakocha.

All tea is from the same plant, so the variety comes from the process pre- and post-harvest. “Hojicha after harvest is dried and roasted. It gives you a really crisp and astringent taste,” Wright says. “Matcha, for example, is in the sun, then shaded for different periods of its growth. After harvest, it’s dried and ground to a powder.”

The tea here is all organically certified and sourced from a seven-generation farm in Wazuka, a small town in the mountainous region of Uji, Kyoto.

“When you’re consuming a powdered tea, you are consuming the entire tea leaf, not just an extraction of those leaves,” Wright says. “So it’s pretty important that tea is organic.”

Harvest Index then offers different grades and styles, which its periodic table-style branding aims to simplify.

There are four grades of matcha alone, starting with the M04 which costs $39 for 30 grams. It’s best for daily drinking, matcha lattes and cooking. “It has a slight umami taste, perhaps a little more bitter to the tongue,” Wright says. Whereas the deluxe grade M01 ($88) is “the best of the best leaves”. It’s made to be sipped on its own and is a vivid fluorescent green.

“Our ceremonial grade MO1 is arguably the absolute best quality matcha you can buy in the world,” Wright says. “I would compare it to wine. You can really taste that refined flavour.”

The G09 genmaicha is a popular Japanese green tea made with roasted brown rice and offered alongside a powdered version, kona genmaicha.

"The brown rice provides a robust, savoury flavour that is comforting and nourishing," Wright says. "The kona variety an ideal travel companion as it only needs hot water to dissolve – no teapot or strainer."

There’s much more to preparing a tea than boiling the kettle. “It can be quite meditative going through a tea-preparation ceremony,” Wright says. “It’s a lifestyle choice, not just preparing a tea for the sake of drinking a tea.”

In store, ceremony specialist Rie Ohnuki walks four customers at a time through the ritual over a free 30-minute tea tasting. “There are lots of little nuances to the way the tea is prepared,” Wright says. “The kind of influencing factors in the flavour really come down to the temperature you’re boiling the water and the amount of time you’re extracting the tea for. There’s no right or wrong in terms of preference, but we make recommendations.” 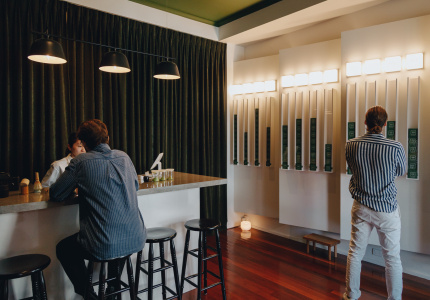